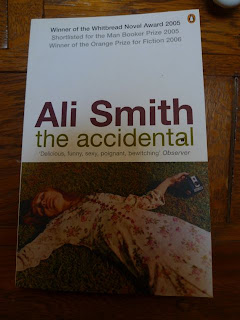 I picked up 'The Accidental' by Ali Smith at a charity shop a few weeks ago. As you can clearly see in the photo the cover claims not only did it win the Whitbread and was Booker shortlisted but it also won the Orange Prize in 2006. I was sure it was not on my list, and on inspection I find that it was merely shortlisted, and hope that this cover will now becomes a collectors item having been published in haste and over eager anticipation of the announcement.

What a weird book. An inside view of what is really probably quite a normal family, with normal kind of hangups, who's lives are disrupted and altered, not necessarily for the better, by the arrival of the wild, bohemian Amber on the doorstep of their holiday cottage. I was left feeling, as I frequently am when people do stupid things, "why did no-one ask who she was and what she was doing there?" The parents, Eve and Michael, are being terribly polite and offer her dinner, and she just moves right in. 12 year old Astrid is delighted just to have a distraction from the tedium and Amber does the job of a slightly distracted older sister, alternately paying focussed attention and ignoring her. Magnus, a teenager with real troubles, is on the edge of the bath about to hang himself when he finds himself quite literally swept off his feet and then seduced by Amber. Michael is distantly infatuated and utterly rebuffed, in spite of being a serial seducer of his female students. Eve, a writer suffering from a crisis of confidence, seems strangely desperate for approval from her, constantly trying to impress and also failing. There is that slightly surreal atmosphere that you get on holiday, that this is not 'real life' for them, they are almost in suspended animation, out of their familiar environment, isolated, with only each other for company. Amber becomes their focus because it is too difficult to talk properly to each other. So the story hops from person to person, seeing each perspective, except Amber, who remains an enigma, making her all the more intriguing. She is like the catalyst that highlights all the flaws in their relationships, as if she is deliberately setting them up against each other. They all have their secrets and she is the one stirring it all up. She seems to find them all extremely tedious and is like some kind of superior being who deigns to bestow her gracious favours upon them and they should be duly grateful. In many ways she is not really a character, but a tool used by the author to upset everyone, to point out how vulnerable our lives are to the vagaries of chance.

What I found most vivid about the writing is her description of Magnus and the breakdown he is going through. He has been involved in an incident that resulted in a girl at school committing suicide. He has admitted it to no-one and the events go round and round his head, things replaying in a loop, it is as if he is looking in on himself from the outside. He is grasping the terrifying unforeseen consequences of his actions, consumed with horror at himself and unassuageable guilt. You get this sense of how fast his brain is working, and how his own thoughts are tormenting him, he repeats the phrase 'First they. They then. Then they. Then she' over and over mixed up with the other thoughts, knowing what he has done but hardly being able to say it to himself:

"He talks all about things. He talks as if they matter. He talks about calculus, about how plants grow or how insects reproduce or about what the inside of a frog's eye is like. He talks about films, computers, binaries. he talks about how holograms are produced. He himself is a hologram. He has been created by laser, lenses, optical holders, a special vibration-isolated optical table. He is the creation of coherent light. He is squeaking about it now. He says coherent light is well cool. He is quality. He contains all the necessary information about his shape, size, brightness. He is sickeningly excited about himself. He is quite dodgy really. He only seems to be dimensional. He is a three-dimensional reproduction of something not really there. He was never really there. Look at him. He's lucky. First of all, he doesn't exist. That's lucky. Second, he's so small. He could slip away under a door. He could slip away in a crack through a wood floor. Third, he's back then, before. The real Magnus is this, now, massive, unavoidable. The real Magnus is too much. He is all bulk, big as a beached whale, big as a floundering clumsy giant. He looks down at his past self squeaking, shining, clambering about on his own giant foot as if the foot is a mountain, an exciting experiment or adventure. Hologram boy has no idea what the foot belongs to. Hologram boy could never imagine such monstrous proportions. First they. They then. Then they. Then she." (p.37-8)

There were some slightly surreal passages, almost random words, I think they might have been Michael's attempts at poetry but that is just a guess, but on the whole a fascinating book. The family are all so real and believable, and sympathetic (well maybe less so Eve, I am having trouble with middle aged women in books recently, they tend to irritate me ... can't imagine why:-) Amber is not real, but I don't think she is meant to be. Amber's impact makes them all look at themselves differently, and make different decisions, or understand that their decisions are not so vital as they once thought. I just loved the symbolism of the moment that they return home from the cottage to find that Amber (we are left to assume it was her) has emptied their house, utterly, except for the telephone answering machine with three significant messages on it. It's as if she were telling them that they really were in such a mess it would be better to start again from scratch. And they do.
Posted by martine at 11:08