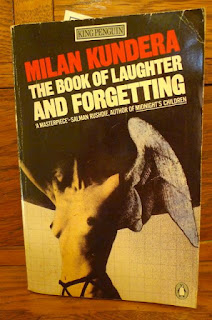 Am just tidying up my posting list and decided to finish off some of the reviews that I started and then lost interest in, or just found I was not sure what to say. This was from about a year ago.

The Book of Laughter and Forgetting by Milan Kundera

I suppose that in some ways this book feels a little dated, having been written over thirty years ago and so much having changed within eastern Europe in that time, and yet it remains of historical interest because it traces for those of us outside the sense of loss of identity that a whole nation can suffer when under totalitarian rule. The book is not so much a novel as a collection of writing about the experience of that loss, some of it personal, some of it written as short stories. There is this sense within his country, Czechoslovakia, that history is racing away, out of control, and mostly nobody even knows what is happening:

"The bloody massacre in Bangladesh quickly covered over the memory of the Russian invasion of Czechoslovakia, the assassination of Allende drowned out the groans of Bangladesh, the war in the Sinai Desert made people forget Allende, the Cambodian massacre made people forget Sinai, and so on and so forth until ultimately everyone lets everything be forgotten." (p.7)

In some ways this little quote is quite prophetic, in the internet age the 'forgetting' seems to happen at an even more accelerated rate as our attention is distracted by an exponentially expanding number of new events and experiences. Many years ago I read The Unbearable Lightness of Being and have been tempted to revisit it; we have the film somewhere as well, I recall it as equally unfathomable. Sometimes you just have to be in the mood for slightly surreal writing. As with things like holocaust memoirs I think books like this are important to read from time to time, just to remind ourselves what happens when things go seriously wrong with human society. I have a brief review of The Cap by Roman Frister on the More Reviews page which I consider to be a book that had a lasting impact on my view of history and humanity.