I'm guessing that anyone who spends any time on the interweb has heard of the 'Bechdel Test'; initially developed for film but it can be applied to any media, it has the simple criteria that the film must have two female characters, they must have a conversation and that conversation must be about something other than a man. Once you know about it you start applying it to everything you encounter (randomly picking 'A near thing for Captain Najork' up from the desk I find it fails.)
Anyway, my eye was caught in the library some time ago by 'Are you my mother?' penned by the famed Alison Bechdel and I have drifted through it in a haphazard way over the last couple of months. I should start by saying I have a very low key relationship with my mum; we are both (I hope) glad the other is around but we don't demand a great deal. Maybe it's just a sign that she is a really good mum and I was securely attached as a child, but I find fraught mother/child relationships a bit unfathomable. 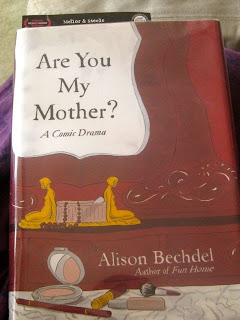 Maybe I just wasn't tuned in to her humour but I utterly failed to find it funny, or maybe only in a very tragic kind of way. The book follows her through the process of (having written one book about her relationship with her father) writing a book (this book) about her fraught relationship with her mother. What I did find amusing on flicking through was thinking of a recent lecture on the Coursera Psychology course on clinical psychology when Steve told us that there is no experimental evidence that therapy actually fixes anything, though plenty of anecdotal evidence that it is better than nothing. The most striking feature of therapy is that it takes a long, long time and therefore, to be honest, it's only for rich people.
So here she is at the beginning of the book talking to her therapist: 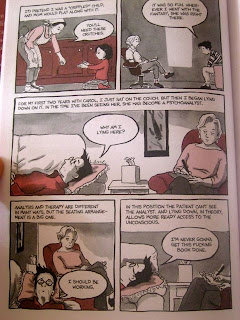 and here she is in the middle of the book (different therapist I think): 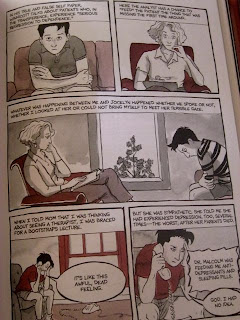 and here she is at the end ... still talking: 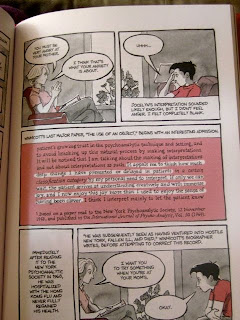 This was another of those reading experiences that made me feel grateful for ordinariness; as Alison trawls though the minutiae of how she feels about her mother I found merely reading about all those years of agonising completely exhausting. Certainly if you are a student of psychology this would be a fascinating read, and it's full of little quotes from the background reading that she was doing as well, but I think you'd have a be a fan to pick it up otherwise.