On our penultimate night we went for dinner at The Treehouse in Monteverde, though it was raining when we walked over to eat so they were not seating anyone under the tree as it is in the open. 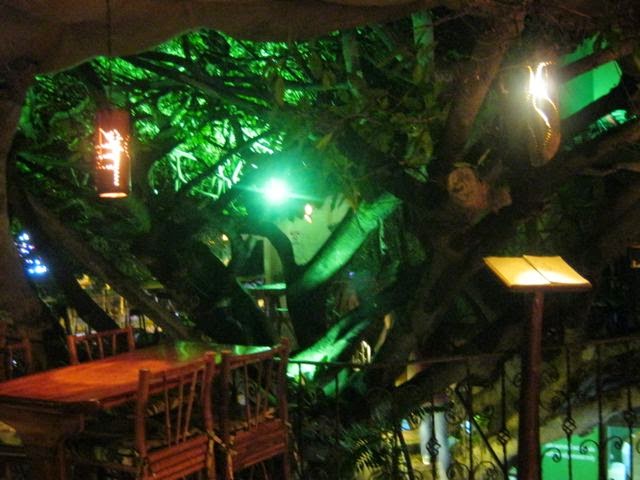 For our last day in Costa Rica we took a hike to the San Luis Waterfall (or catarata, a word we became very familiar with in chatting to various people along the way). It seemed straightforward. Take the early bus to the cloudforest but get off at the turning to San Luis, walk downhill 7 km until you find it. It turned out that Jovan probably hadn't ever been to the San Luis Waterfall (but it was the only time they let us down). 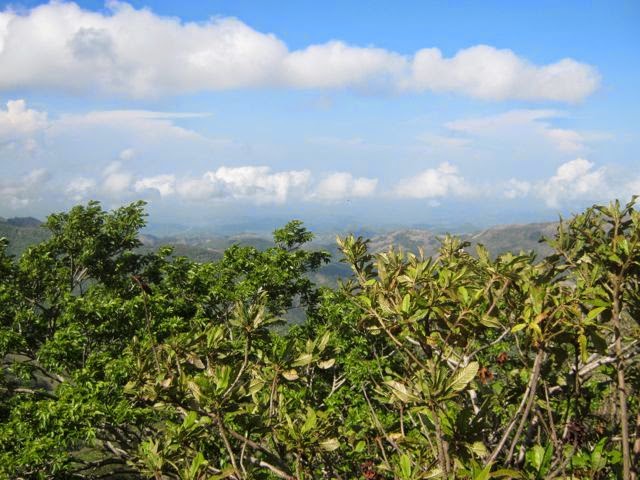 Another of my best photos, a green spiny lizard on the walk down the hill:

So we walked and we walked. It was downhill all the way. Past the school: 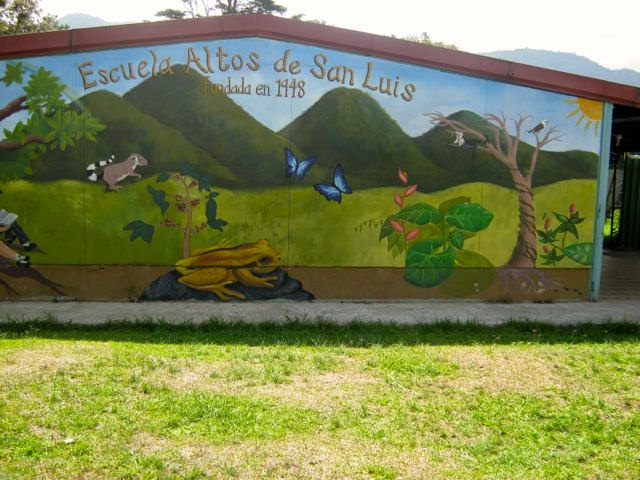 Past the health centre (these buildings were sprawled randomly down the hillside, seemingly nowhere near where anyone lived): 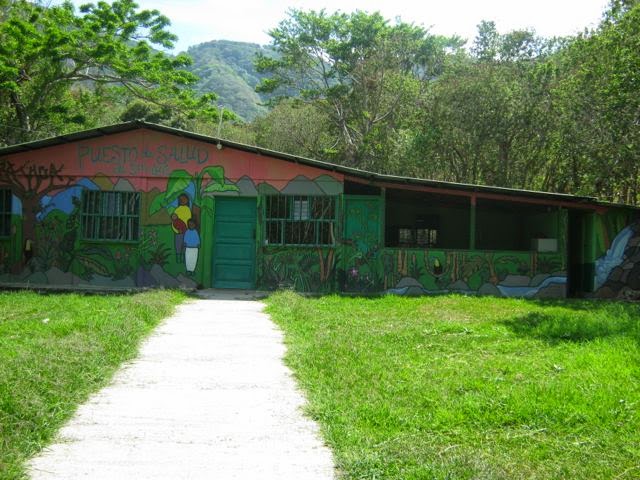 We saw plenty of birds, and then a very camera-shy squirrel: 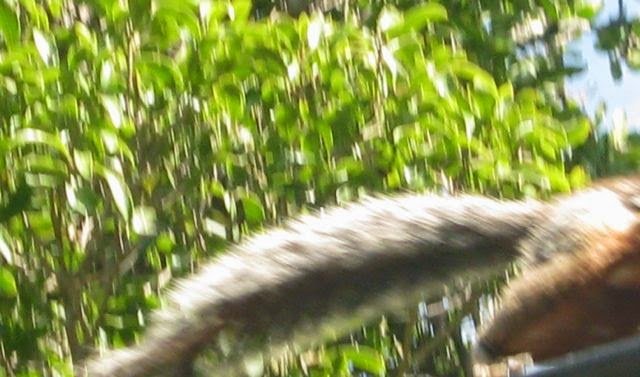 We were very hot, very tired when we reached the bottom of the valley and the village of San Luis, having descended several thousand feet. There was no sign of the waterfall. I insisted that we walk out the other side of the village, where we finally encountered a man who told us it was back up the hill. Mum then knocked on someone's door and after a long chat established that we had to go back up past the school and take a turning. This was 3km ... back up the hill. In the scorching, midday, heat. We stopped by the river for a drink and to reapply suncream. Someone had thoughtfully dammed the river and created a deep luscious pool. Although just behind us the road crossed the river on a little metal bridge no vehicles had come past us in over an hour and there was no one about.
It was irresistible: 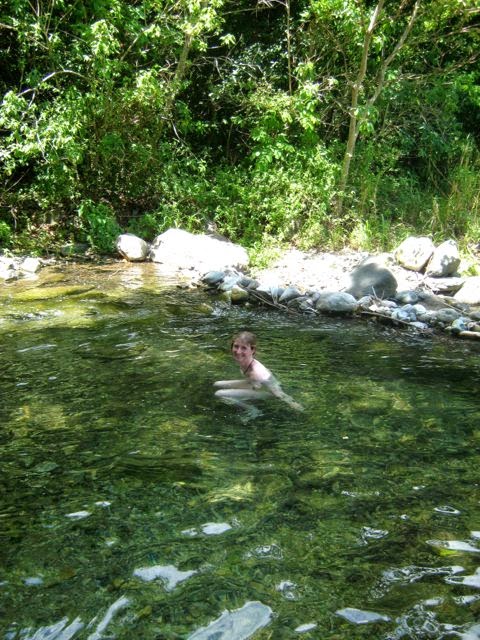 Having been cooled and refreshed I was all set to march back up the hill. Mum was a bit more the worse for wear so the walk back up was done in tiny stints between patches of shade and included a welcome sit-down at the cemetery. Having got off the bus around 8am it was 1.30pm by the time we arrived at the entrance to the waterfall. From there it was another 1km to the fall itself. The perk was it was through the rainforest along the river. 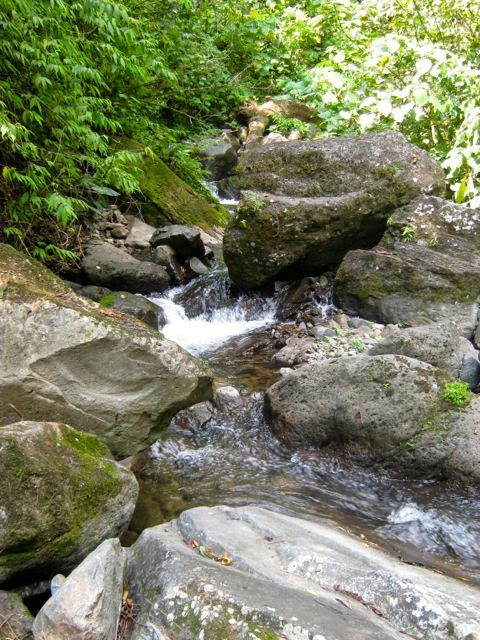 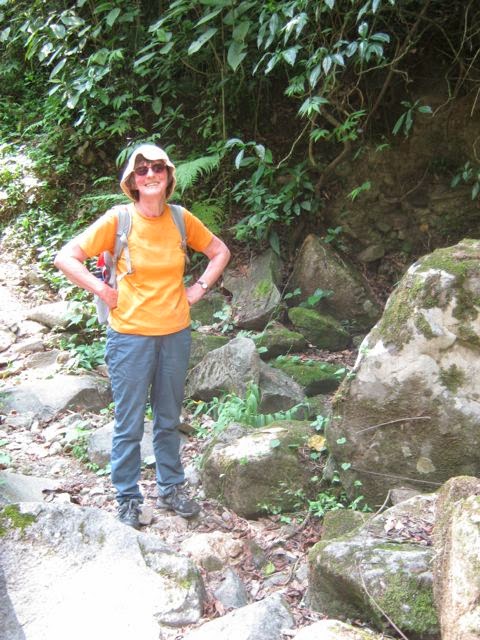 I am trying to upload the video of the final stretch and the waterfall itself, but am not sure it is working. (Gave up on the video, in fact the two short films that I put together with these photos at the end wouldn't even load to Flickr). You can go to the 'Search for the San Luis Waterfall' album on Flickr and see the little videos of us making the final trek (actually, go to just this one, the first one has not loaded properly either). 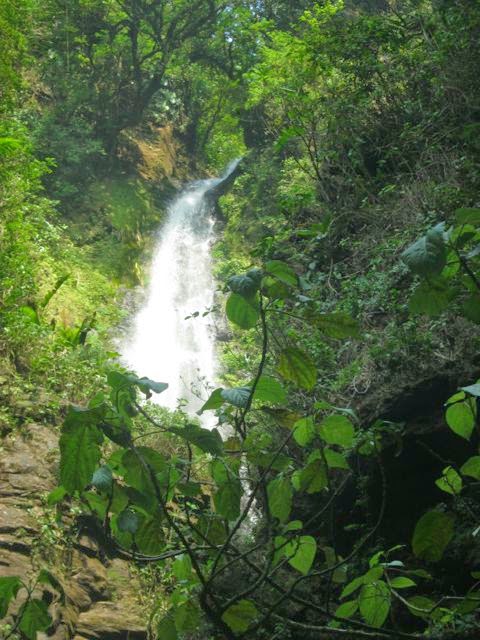 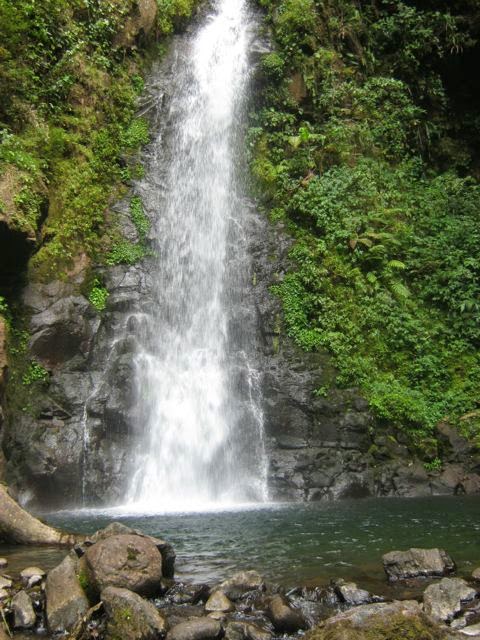 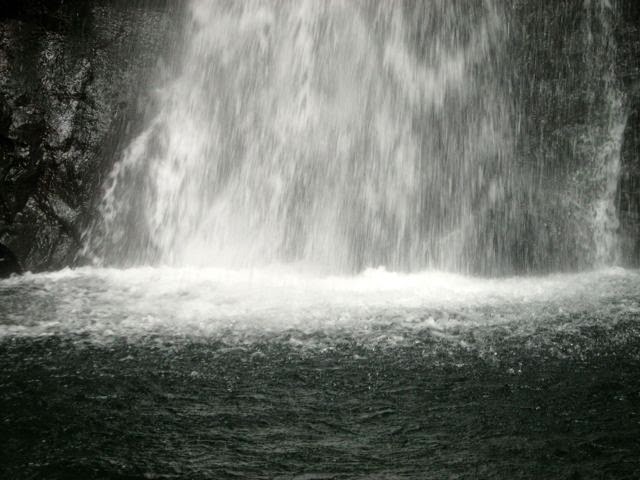 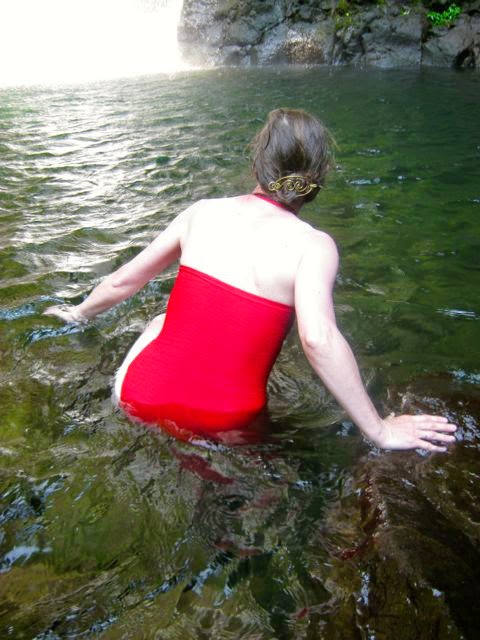 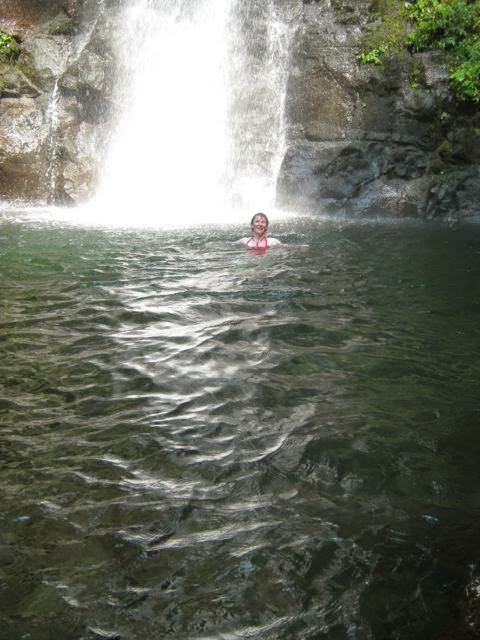 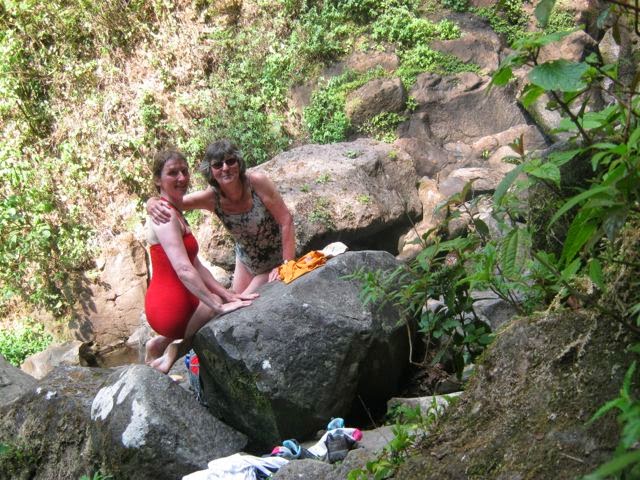 The water was take-your-breath-away cold but very exhilarating. It was so beautiful and we sat and watched a flock of swift type birds swooping in and out of their nests in the rocks around the valley and up above the waterfall. We had hoped to be there for the middle part of the day when the valley is a sun trap, to sit on the rocks and read and have our lunch. The perk of being late was that we had the place to ourselves, but the sun had moved around and it was cooling off down in the valley, so we only stayed about an hour, allowing plenty of time to walk back and call the taxi. We waited half an hour for it to arrive, admiring the fruit in the garden of the people who ran the little cafe and trying (and failing) to capture more hummingbird photos. 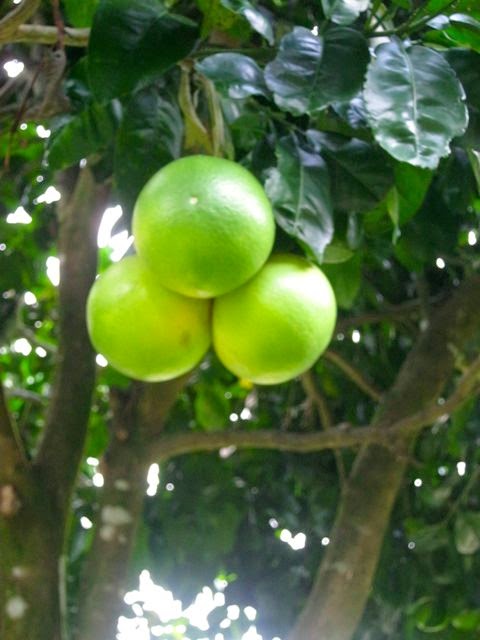 The final one of my wildlife photos, and probably the best. This is a Glasswinged butterfly: 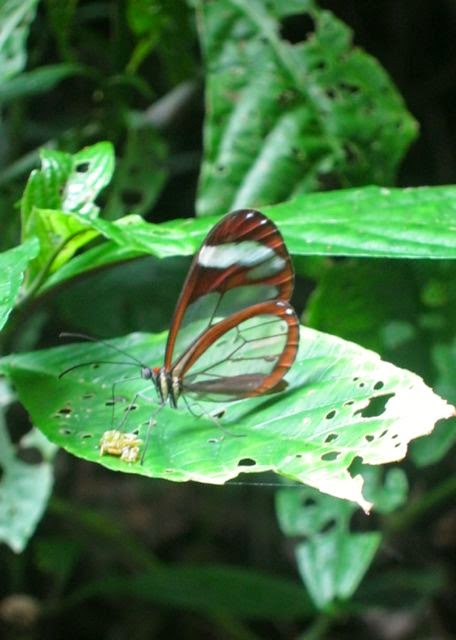 At 6am on the 23rd we said our goodbyes to Pension Santa Elena and caught the bus back to San José. 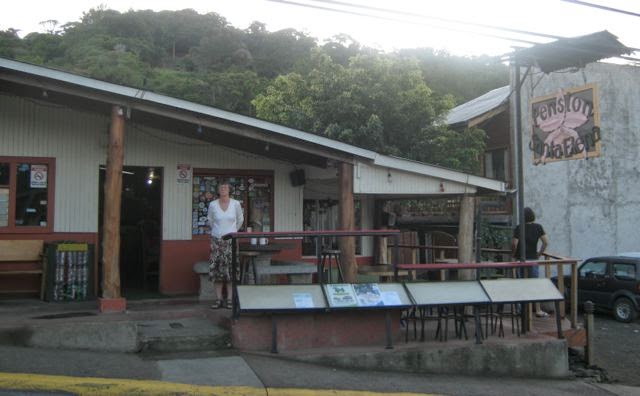 We left San José just after 5pm. As we flew away we briefly had the sunset through the window and then about eight hours later were awoken with the sunrise on the other side of the world. 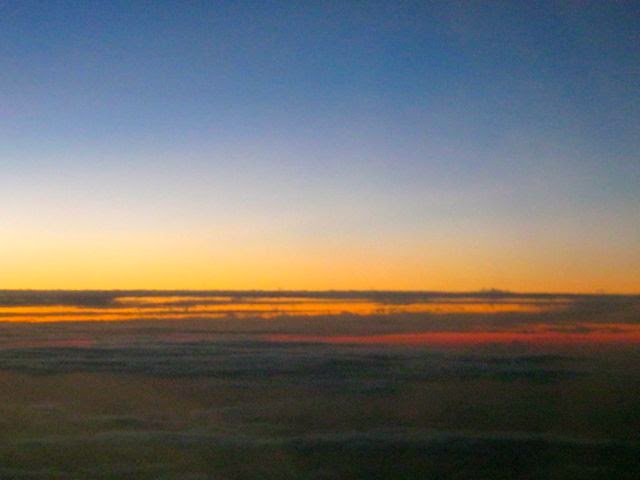