Letters of Note (not an A to Z post) 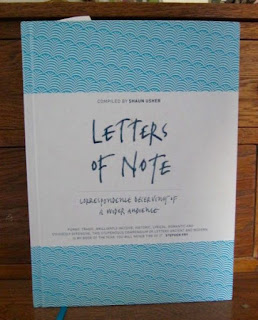 Yet another Brainpickings book is 'Letters of Note: Correspondence deserving of a Wider Audience' complied by Shaun Usher that I have been dipping in to over the last couple of weeks. The collection covers everything from ancient bits of clay and bark, through significant moments in history, to connections between significant cultural and political icons of the 20th century. You can read about Queen Elizabeth's recipe for drop scones, Bukowski's views on censorship, how Monty Python's Life of Brian nearly didn't get made, Einstein on the potential creation of nuclear weapons and Dostoyevsky's near execution in 1849. Some of the most moving ones are love letters, several to deceased spouses. Some are just funny moments that tell us something about the human condition. What I liked is the fact that in many cases there is a reproduction of the actual letter alongside the more legible text, so here are a few of the signatures of some interesting notables:


The one that amused me is a job application letter from Robert Pirosh, hoping for a screenwriter job in Hollywood:

I would definitely have given him a job.