This isn't the sort of thing... 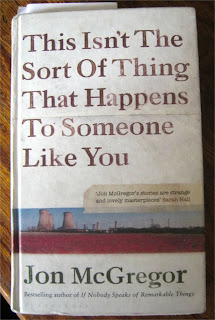 'This isn't the sort of thing that happens to someone like you' by Jon McGregor was started during the read-a-thon last month and it has taken me this long to get to the end of it. This collection seems based on the presumption that the place they live has some subtle impact on the people who live there. They are all set, as indicated in the story titles, in 'the fens', eastern England, an environment with which I assume he is familiar. It has a feeling of remoteness about it, and this is definitely something these stories share.

He experiments with slightly quirky formats, some a little unfathomable; the final 'story', Memorial Stone, is simply a list of place names, grouped by the suffixes they share, 'ham' or 'ton' or 'worth' or 'thorpe', and so on, there is something faintly poetic about it. Another, 'What Happened to Mr Davison' reads like an official meeting about some unfortunate workplace incident, but it cleverly parodies official language, skirting around the issue and never actually tells us anything about the incident or what the problem was. In 'In Winter the Sky' we find a farmer hiding an old secret, and on the opposite pages his wife is writing a poem, complete with edits and crossings-out. A few of them are heart-breaking, like 'Keeping Watch Over the Sheep', about a man wanting to see his daughter in her first nativity play but prevented by a court injunction from being near her; the man is plainly a little unstable but his devotion to her is palpable.

I like the way McGregor gets inside his character's heads, and inside their relationships. He is just so quietly observant. As I have noticed before, everything about his writing is subtle, understated, it sneaks up on you and leaves you with a wry smile. As usual it is hard to talk about so many different stories or do justice to the book as a whole. However I did find this wonderful video of Jon himself reading one of the stories in the book. It's called 'Looking Up Vagina'. People laugh as he reads, possibly because it makes them so uncomfortable, but this story made me want to cry because of the way the narrator manages to avoid saying anything about the way he feels about the bullying he experiences. It demonstrates so beautifully the way he gets to grips with the human condition.