I'm sure other people's holiday photos are pretty dull. We take them, I ended up feeling, to remind ourselves that it was all real. While it was happening each day seemed long and full of activity but when you get to the end it takes on a dreamlike quality. It is going to take quite a few posts but I am writing partly as a record for myself and the family of our adventure, because I will enjoy reading them over to remember the details, but also because I feel that I learned so much about the rainforest and why it is so important that I hope visitors might find interesting. There might be a few pretty pictures, despite my really unimpressive camera occasionally I got a good shot. The first post is a brief overview of our first week.

The most welcome of sights after nearly 11 hours on a plane, the coast of Costa Rica. Even from the grand heights of nearly 40,000 feet I could see a tanker on the ocean below at one point. We landed in San José early afternoon Monday 12th and stayed the night at the Costa Rica Backpackers hostel. The city had more the feel of the scruffy parts of Manchester than Costa Rica and we were glad to leave again. The main danger was breaking your ankle in the deep rain gutters along the edges of the roads. 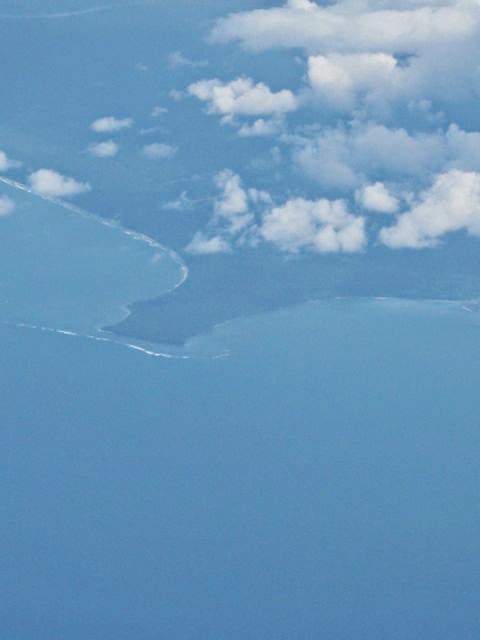 Tuesday 13th the taxi picked us up at 7am and took us back to the airport for the internal flight to Puerto Jimenez on the Osa Peninsula. This is the little twelve seater plane that took us the 370km across the country. No one else seemed to want the front seats so mum and I ended up behind the pilots. I could watch the instruments all the way; we flew at 9,500 feet and 140 knots. 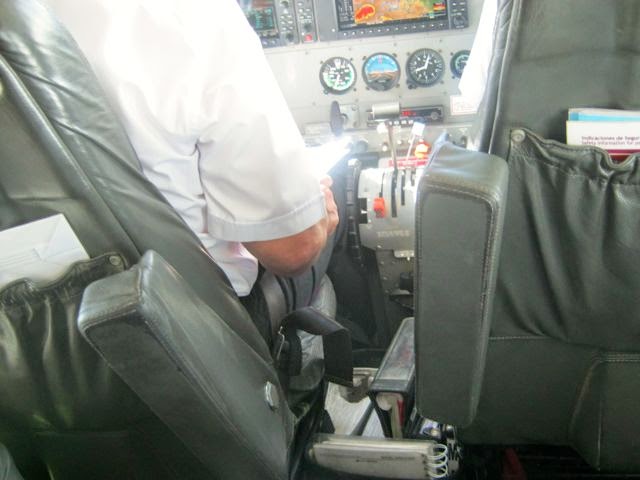 Below us the entire country seemed to be covered in forest. 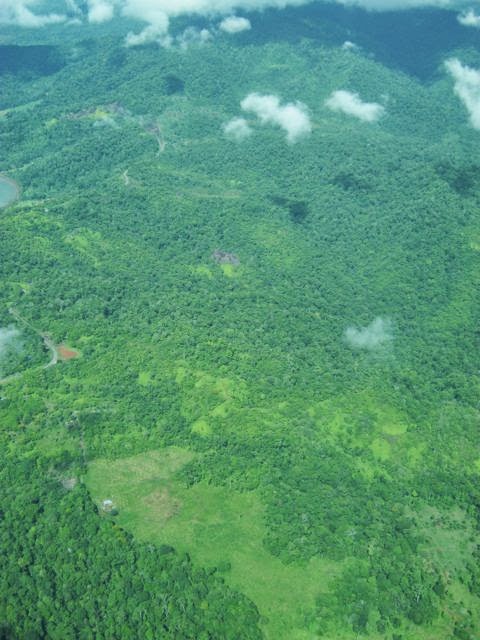 The flight is only an hour then we taxied (unnecessarily it turned out as it was only a kilometre) into the town centre. It is the ultimate one horse town, a single main road with some shops (without any of the american chains that had been all over San José) and a few side roads of houses, mostly traditional single storey, breeze block built with corrugated iron roofs, painted in bright colours ( I failed to get a photo of the houses). We took a walk round the bay, where I got a little sunburnt but we saw our first lizard, then came back to wait at the soda (cafe) for the collectivo. In this case the collectivo is a converted cattle truck that would take us (for a couple of quid) on the 42km 2 hour ride to Carate. Despite the bumpy ride it was lovely because the breeze blew through the back of the lorry, and I spotted my first monkey too. 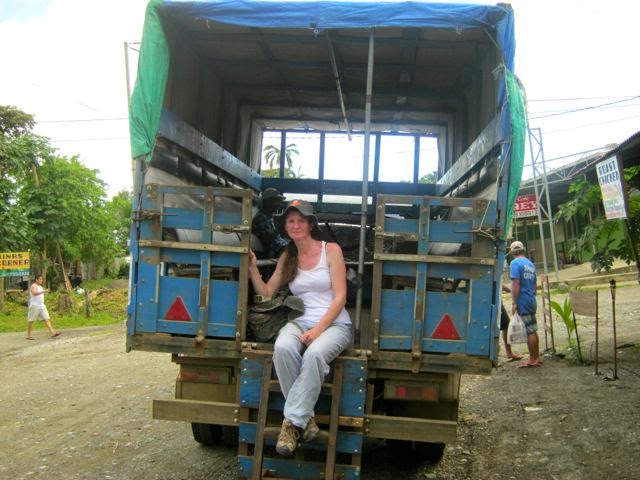 The horse and cart from La Leona met us from the collectivo and took our luggage while we walked the kilometre along the beach (there is no other way there). It took about an hour and the rain caught up with us just before we arrived, but that was lovely too. 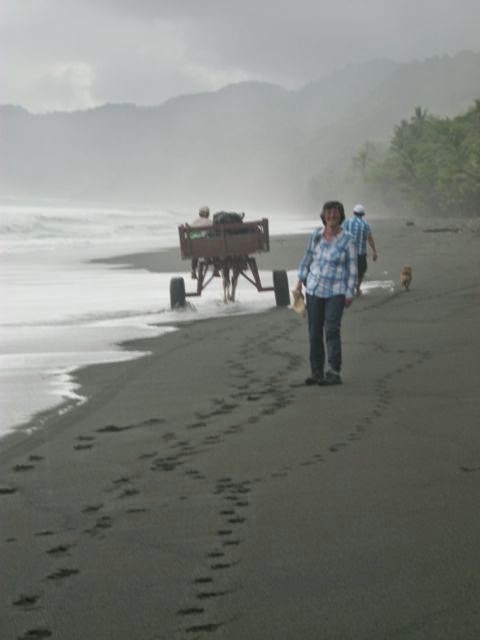 One of the perks of coming outside the high tourist season is the lack of other visitors. Because the place was so quiet Joel upgraded our accommodation to an ocean view tent with private bathroom. It is basically a wood and bamboo structure with mosquito net walls, it zips up to keep the insects out. I could lie in bed and see the pacific ocean, and several mornings got up before sunrise to sit on the veranda and watch the waves (they were pretty noisy so it was hard to get back to sleep. I assume maybe it's like living near a motorway, that after a while the sound ceases to disturb you.) 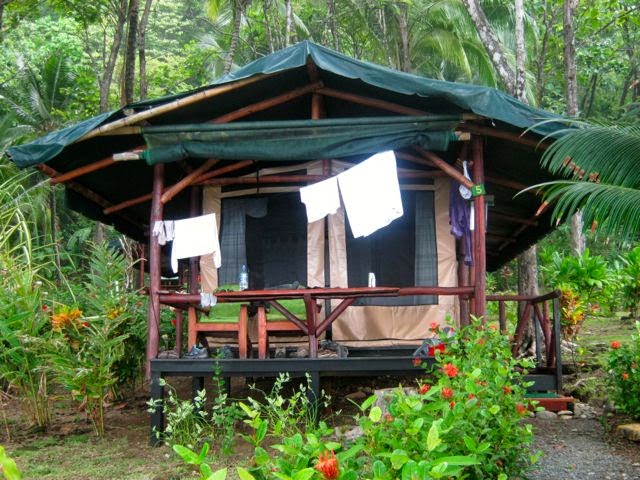 The bathroom at the back was outside the main part of the tent and then there was this tiny enclosed 'garden' that contained the shower; a bamboo pole supports the pipe and the shower head is a coconut with holes drilled in it, it worked surprisingly well. The water was cold, but after the first one I really enjoyed them and took several every day. Fun experiences sitting on an outside loo included a visit from the huge marine toad, copulating anole lizards amongst the rocks, leaf cutter ants and a halloween crab in the bin one night. After this last incident I started checking the floor with the torch before venturing for a midnight pee; there was no electric in the tents, we went to bed by candlelight. Fabulous as it was we didn't linger in the tent much and set off first thing the next morning, and every morning that we were there, into the rainforest. This is a tiny sample of the things we saw. You can visit my Flickr albums and see more.
Scarlet Macaw - saw them every day, often many, always in pairs, they mate for life: 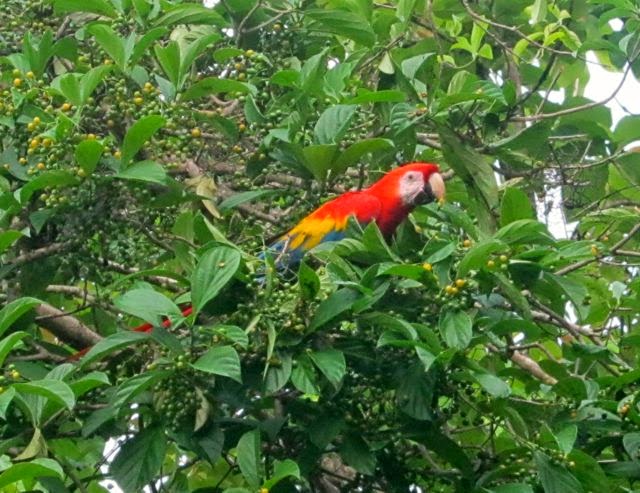 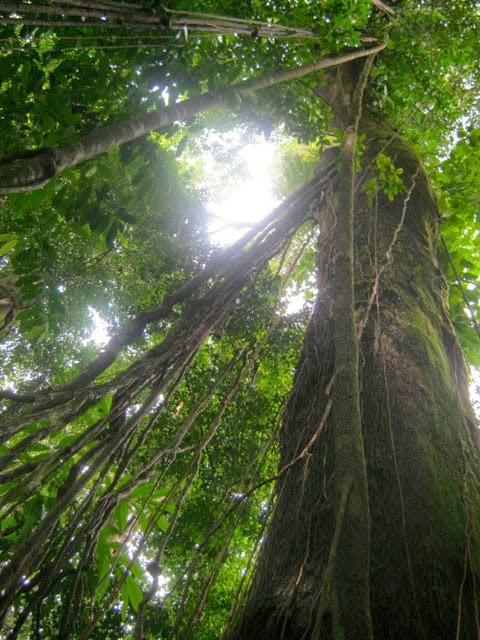 Basilisk, another creature that I thought would be rare but we saw loads of: 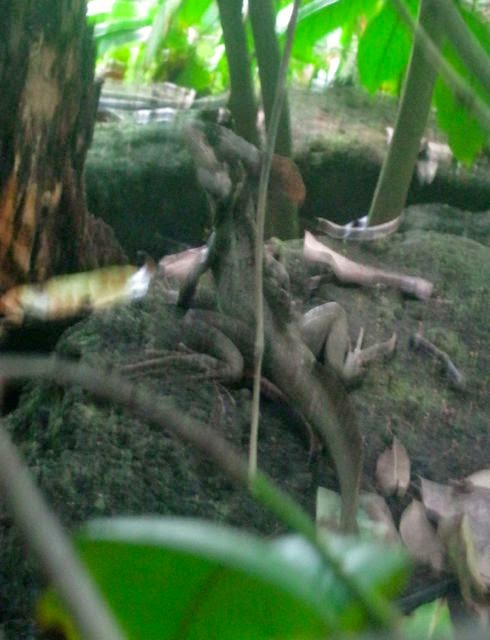 Coati, a couple of times we saw them singly but as we walked back to the lodge on our guided tour of Corcovado we encountered a whole group of about twenty, including youngsters: 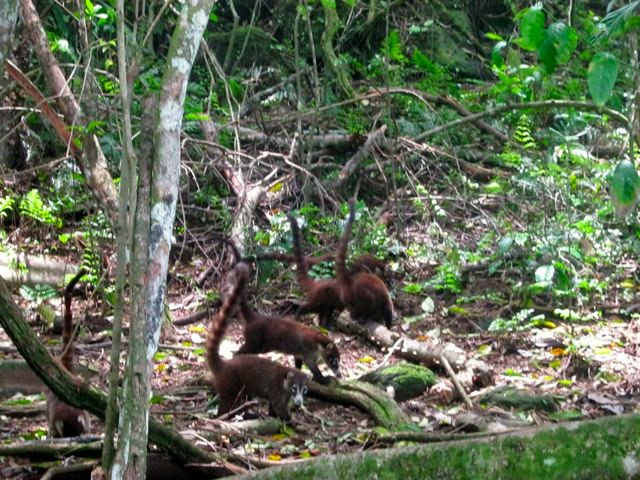 This White Faced Capuchin came down to the ground and startled the group of coati causing them all to leap instantaneously onto the nearest trees, where they paused for a few seconds before they ascertained there was no danger and then returned to their browsing: 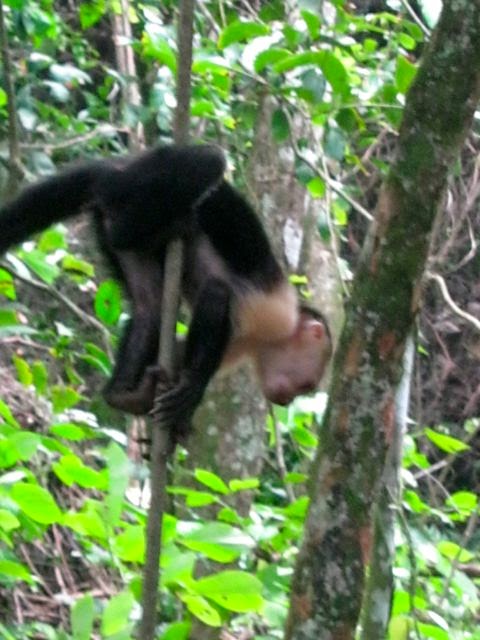 Poison Dart Frog, I recognised this at once because the kids used to have some plastic ones when they were little: 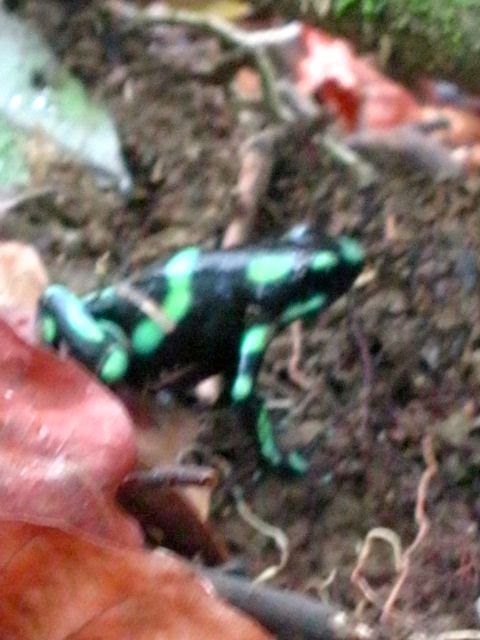 Anteater with a nearly full grown baby on its back: 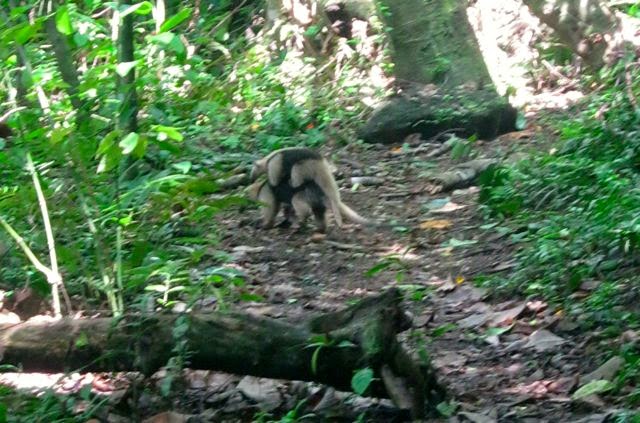 Baird's Tapir is probably the most endangered species we saw, it is in danger of extinction, and also the largest mammal in the rainforest; this one was in the Corcovado reserve but we also saw two asleep under the trees on our first morning at the La Leona reserve: 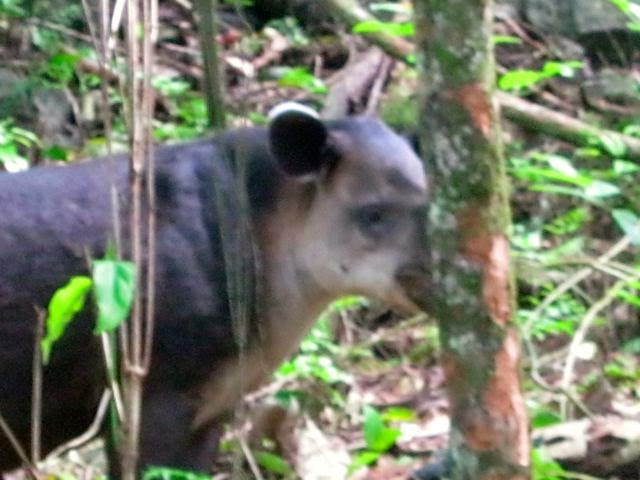 Leafcutter Ants became my absolute favourite creature, I enjoyed watching them everywhere, these ones were in the garden area outside our tent. I first spotted them carrying a line of tiny white blossom. Apparently the nest they build under the ground is huge and the colonies can be millions strong: 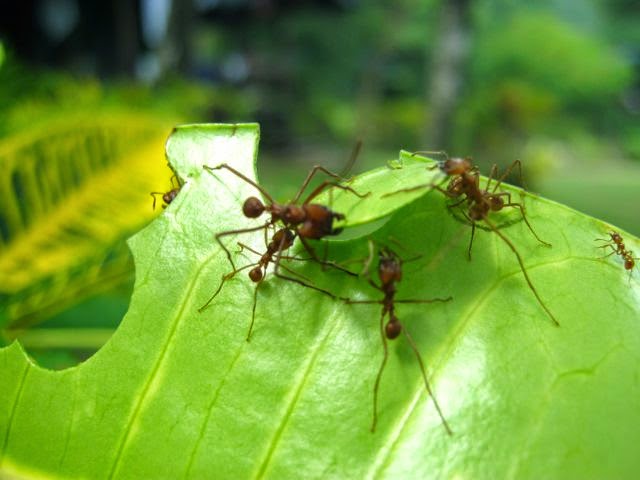 This photo of Black Vultures feasting on what looked like a dead Iguana was taken on our last morning at La Leona. Another bird that was everywhere, we frequently saw them circling overhead: 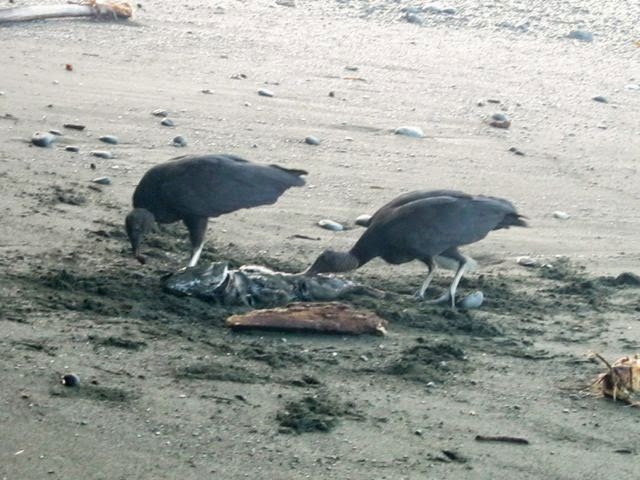 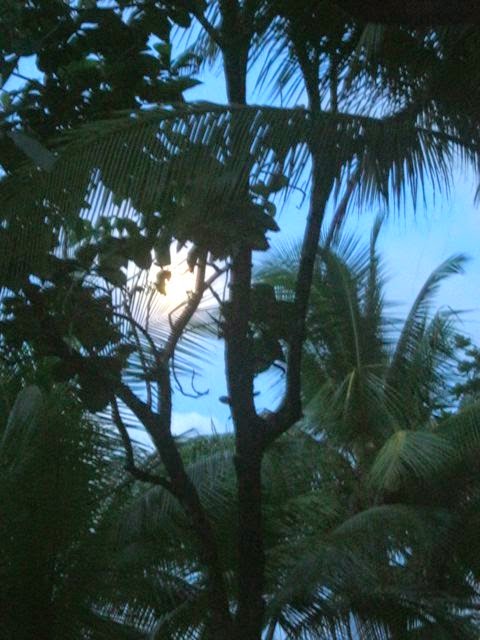