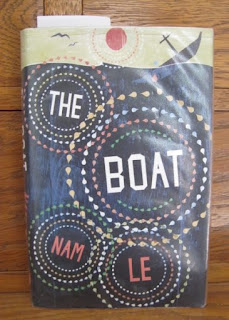 'The Boat' by Nam Le was recommended in many places and was certainly a brilliant collection of stories. It's always difficult to review a short story collection, this one particularly because of the range of subjects that he has written about, there does not seem to be any overarching theme or link between them. Le is Vietnamese by birth so the last story in the book, 'The Boat', almost seems obligatory; it is a claustrophobic tale of a refugee boat journey, though not told from personal experience since he was a baby when making the voyage himself. I thought it was interesting however because in the first story 'Love and Honour and Pity and Pride and Compassion and Sacrifice' he has the characters discuss the idea of 'ethnic lit':

"'It's hot,' a writing instructor told me at a bar. 'Ethnic literature's hot. And important too.'
A couple of visiting literary agents took a similar view: 'There's a lot of polished writing around,' one of them said. 'You have to ask yourself, what makes me stand out?' She tag-teamed to her colleague, who answered as though intoning a mantra, 'Your background and life experience.'
Other friends were more forthright: 'I'm sick of ethnic lit,' one said. 'It's full of descriptions of exotic food.' Or: 'You can't tell if the language is spare because the author intended it that way, or if he didn't have the vocab.'
I was told about a friend of a friend, a Harvard graduate from Washington D.C., who had posed in traditional Nigerian garb for his book-jacket photo. I pictured myself standing in a rice paddy, wearing a conical straw hat. Then I pictured my father in the same field, wearing his threadbare fatigues, young and hard-eyed." (p.9)

While this first one is narrated by a character named Nam Le he moves quickly away from any sense of the autobiographical with stories that go off in a wide variety of directions: an elderly man hoping to reconnect with his long-estranged daughter; a teenager struggling with his mother's illness and being threatened by a 'love rival'; a naive young woman travelling to Iran in search of a friend with political ambitions. Such excellent writing, with voices so distinct and authentic. Short stories are at their best I always feel when they immerse you in an unfamiliar time and place and allow you to connect with other human experience. In 'Hiroshima' a young girl tells us of life as an evacuee, longing to be back with her family, in the days and hours before the bomb falls:

"Do without until victory! I am under a ginkgo tree and behind it the sky is darker, the colour of dry dirt. I will walk and dry in the wind. The watercolours are gone. Taker's friend tried to eat the watercolours and was punished by Mrs Sasaki. I imagine the smell of potatoes, with spices. Butterburs and horsetails. It has been so long since the last Visiting Day. Yukio and Tomiko were angry because Mother did not follow the rules and brought me luxurious food: two pears, and rice with red beans, and sesame seeds with salt. Their mothers did not bring so much. I gave them sesame seeds to chew. Where is Big Sister? I ask. Sumi could not get a travel certificate, says Mother, even though she is eligible for evacuation. She tells you to work hard on the farms to help with the food shortage. Yes, I will. Sumi is a loyal subject, says Mother. In the day she is mobilised and at night she works at the munitions factory. I see her in the rain with her face shining. Father does not look at her. She tells you to remember the way of Bushido. Mother sleeps with her head on the summer clothes she brought for me. Now they are wet, and cold against my skin. The wind is loud. That night the room is full of darkness and whispering. Her hair smells of chrysanthemum and pine oil and as I sleep I try to keep the smell in my nose." (p.173-4)

So good, get a copy.