The People of Paper

'The People of Paper' by Salvador Plascencia is probably something I came across during the 'Weirdathon' as it is distinctly weird. It has a most unusual structure with several characters telling their side of the story simultaneously, sometimes in separate paragraphs, sometimes in columns across the page. I am wondering if it is an extended allegory, though I am not sure. A revolutionary movement is struggling to resist the malevolent influence of the planet Saturn, and most of the characters are involved in this mostly silent struggle. No explanations are given. 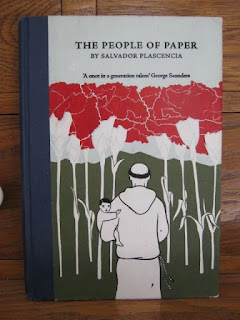 It reminded me partly of Gabriel Garcia Marquez, it certainly has a magical realist quality to it, with characters made from paper, mechanical tortoises and prophetic babies mixed in with the normal difficulties of life. Saturn is also a character, though also, it emerges, representative of the author, and this begins to make sense. The characters are trying to resist his control, lining their homes with lead and thinking of nothing (since he can read their thoughts), so maybe it is a revolution of characters against their creator. I am not sure. I did not try to think too hard, or analyse it as I read, just allowing the story to unfold. It is very multi-sensory, with lots of descriptions of sights and sounds and tastes and smells and sensations, which made it very absorbing to read. I am not sure I wanted, or needed, to know what it was all about.

"LITTLE MERCED
The was no Saturn or school, nobody to beware of but my father. I spent the afternoon shaded under an outgrowth of carnation plants, using the switchblade Froggy had given me to cut the whole limes into rinds. I did not have to be locked in my room chewing the bitter meat of seeds and the waxed skin; instead I spit the seeds into the air and let the peels fall on the ground.
This is what emancipation allowed, what it was like to live outside the casing of lead.
I ate my limes and returned to Apolonio's with my sack empty, my tongue burnt by the citrus juices, and my lap and hands stained and sticky.
'My father will know,' I said, showing him my fingers and then sticking out my tongue.
He was calm, squeezing soap lard into my hands, and then sprinkling pumice sand.
'Lather. That will take care of your hands. And there's a sponge for your dress. You can chew flower petals for your breath.'
I stuck out my tongue again so he would see the peeling skin, but he just shook his head. There was nothing he could do for my tongue." (p151)

Saturn's pages become blank as the characters fight against his influence, and Little Merced learns to block her thoughts and so her columns become patched with black blocks and circles that obscure the text. Then gradually he regains control and his strength pushes back the accounts of the other characters until they are forced to quit the story. A most unusual book with much to offer readers who seek out experimental fiction.