Blackbirds in the garden 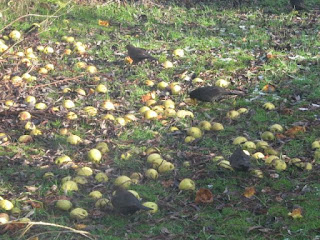 One of the trees in the garden lost all its leaves and looked faintly ridiculous with all the apples still attached. As winter set in they finally dropped and the blackbirds have been feasting on the fallen apples; the females seem to be chasing off the males, who sit in the surrounding trees waiting their turn. It's just nice to look out through the kitchen window and see them there, frequently oblivious to the neighbourhood cats who crouch down by the shed watching.

I bought John Berger's 'Bento's Sketchbook' several years ago. I hoped it might inspire me to go back to drawing. It is a strange little book, physically very satisfying with a textured hard cover and thick pages, an excuse to just meander through his own thoughts, about art and philosophy and life, and fill pages with random sketches. The idea for the book sprang from the information that Spinoza carried a sketchbook with him, but after his death none was found amongst all his letters and manuscripts. The book is scattered also with quotes from Spinoza (about whom I know nothing), but I found them rather vague and unfathomable. 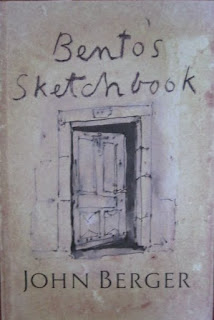 "Each spring when the irises begin to flower, I find myself drawing them - as if obeying an order. There's no other flower so commanding. And this may have something to do with the way they open their petals, already printed. Irises one like books. At the same time, they are the smallest, tectonic quintessence of architecture. I think of Mosque Suleiman in Istanbul. Irises are like prophesies: simultaneously astounding and calm." (p.106)

I like this, and I don't have the faintest idea what 'tectonic quintessence' means. 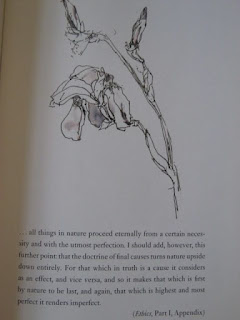 "When I'm drawing - and here drawing is very different from writing or reasoning - I have the impression at certain moments of participating in something like a visceral function, such as digesting or sweating, a function that is independent of the conscious will. This impression is exaggerated , but the practice or pursuit of drawing touches, or is touched by, something prototypical and anterior to logical reasoning." (p.149) 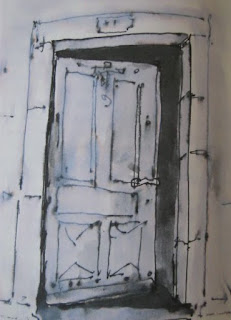 He fills the book with stories about art that he has valued and places and people who have had quiet impacts on him, close friends and casual acquaintances. I liked it because it is so casually intimate, just like you are listening to him talk. And the simplicity of the drawings that he includes is encouraging, things that are just around and he happened to draw them. 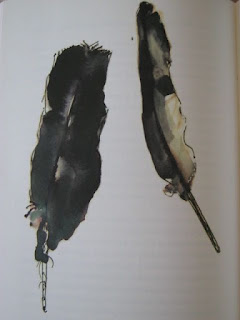 One quote from Spinoza I did get to grips with (even though it is a long convoluted sentence), from Ethics, Part IV, Definitions VI (and isn't 'we are won't a wonderfully archaic expression).
Just something to ponder:
"But it is appropriate here to note that we can only distinctly imagine distance of time, like that of space, up to a certain limit, that is, just as those things which are beyond two hundred feet from us, or, whose distance from the place where we are exceeds that which we can distinctly imagine, we are wont to imagine equally distant from us and if they were in the same plane, so also those objects whose time of existing we imagine to be distant from the present by a longer interval than that which we are accustomed to imagine, we imagine all to be equally distant from the present, and refer to them all as it were to one moment of time."
Posted by martine at 15:15