I haven't posted in a week and look at all the shit that has happened. I kept intending to respond but was not sure I had much to add beyond WTF. America had an attempted insurrection, and apparently nearly half of Republicans think this is ok. WTF. And republican politicians love to suggest we should all forgive and forget, like it was nothing really to try and overthrow democracy. WTF. I mainly want to just tell them to suck it up, it's only four years, it'll be over before you know it and then you can try again. (How Biden Stole the Election) When Trump won it was terrible, and I don't even live in America, he's done lots of shit things but hopefully nothing irreversible (expect those separated children who have been lost), we survived and now it's over. (Time until Trump is out of Office.)

On the home front Royal Mail's senior management have just discovered that the pandemic is affecting the delivery of mail, releasing a list of a mere 28 areas affected by delays. I guess the chain of command is so long it's taken this long for them to hear. Strangely Manchester is not on the list. 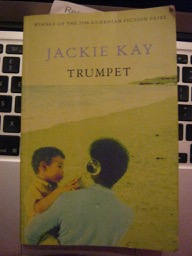 'Trumpet' by Jackie Kay, found in a charity shop ages ago, was an unexpected read. Joss Moody, a famous jazz trumpeter, has just died, and for everyone but his wife there is a surprise in store when it emerges that he was actually a woman. All the way through the book I continued to think of him as a man, his wife continues to refer to him as her husband, and even their confused and angry (adopted) son continues to refer to him as his father. The story follows the reactions of people around Joss, and also a journalist trying to sensationalise the story. She goads the people she talks to, trying to make them express horror or shock, but they all loved this person, and admired his music. What I took away from the story was how utterly irrelevant one's gender should be to how one's life is viewed. Joss the musician is the person who was admired and loved, his band mates dismiss the importance of the discovery with a side of 'so what?' Their son Colman takes the whole book to come around and realise that his father's love is not undermined by the revelation. He hardly takes the time to grieve he is so consumed by confusion. His wife on the other hand sinks into the abyss, and Jackie Kay writes about it so beautifully:

"When I go into our bedroom, the bed is just lying there. As if to say, it's only me again. I keep expecting that some miracle could happen, that I could just come up the stairs and find Joss in bed waiting for me. Each time I come into this room the emptiness of it punches me in the stomach. There is something so repetitive about grief. First the stupid hope, then the violence of remembering. The hope, then the carpet from under your feet. If Joss had lived and I had dies. If Joss had seen a doctor. If I had made Joss see a doctor. The same things spinning every day and night. Each night I'm afraid to sleep. I know Joss will find me. I know I will wake up and forget and then remember." (p.95-6)

"I cradle the phone. I say to the spirit that I know is still there: I'm going to phone our son. I'm going to phone our son. I push the numbers. My fingers feel barely strong enough to push the numbers. I get Colman's answerphone. I have always hated them. How can he have it on at a time like this when he knows his father is dying? I hold on waiting for the beep that everyone tells you to wait for. When it comes it frightens me, it is so loud and thoughtless. I say, Colman? Colman, are you there? And the real Colman is on the line in a flash. Your father died an hour or so ago, Colman, I say. Can you please come round?" (p.204)

What the story does not do is tell you what Joss Moody thought. He is already presenting as a man and playing the trumpet when he meets his wife (who's name I can't find, the chapters are in first person from different people), she falls in love with the human being he is, and continues to love him after he reveals the truth about himself. But the reader has no idea what led to the choice he made. Was it because he wanted to fit in with the jazz music world, or is that irrelevant. And although I was left curious about how Joss experienced his life I was left more with the impression of a powerful personality who inspired such a strong response from the people in his life.