A variety of things saved up over the last few days 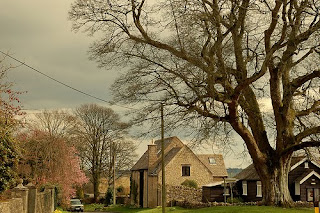 This week I have been learning a new duty down in Bourton, covering Clapton on the Hill, Cold Aston and Notgrove. This is a very affluent part of the world, lots of very big houses, lots of scattered farms and of course very strictly cotswold stone. The centre of Cold Aston (also sign posted at the main road as Aston Blank, but apparently it is just two names for the same village) has this most wonderful huge oak tree. I was also once informed by one of our managers that there is such a person as a 'Notgrovian' (his wife was one), someone who was born in and has lived in the village their entire life. In a village of a couple of dozen dwellings there are a surprising number of them apparently. The village is interestingly numbered; 3, 6, 6a, 7, 8, 9, 19, 10, 14, 15, 37, 38, 39 (with other unnumbered houses). 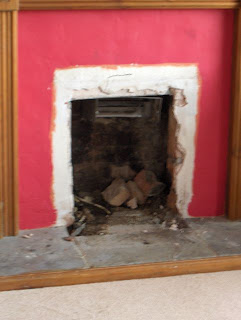 This is the state of our front room, but it's brilliant: we have had a new central heating boiler fitted this week. This is the hole where the previous one was behind the gas fire. Hopefully it will cut our bills, being nice and economical, and we have hot water on demand, replacing the old furred-up hot water tank, though I have lost my 'hot cupboard' which was great for drying washing in the cold weather. 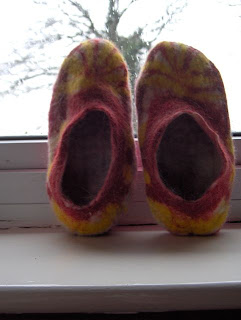 This is my second attempt at felted slippers. The are lined with some alpaca to make the insides soft, but the alpaca migrated through the felt as I made it and I fear they will moult somewhat. I have sent them as a 'un-mother's day' present for my mum. You can pop back and see the previous pair here to see the construction method. 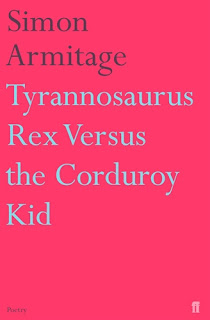 And finally some poetry. Apparently April is National Poetry Month (in America I think) so lots of blogs have been mentioning it. I found this Simon Armitage book in the library (and also found a surprisingly good selection of poetry books that I wll definitely be revisiting regularly). I have not had the chance to read the whole thing but wanted to share one to whet your whistle. I did like the one called 'Learning by Rote' but it is printed in reverse, and very challenging to decipher (I resorted to the mirror in the end), and two extracts, one from 'The Bayeux Tapestry' and the other from 'Sir Gawain and the Green Knight, made me want to go and seek out these longer works. Another I read to the girls is called 'Horses M62' is about a group of stray horses on a motorway, very spooky and atmospheric, almost a ghost story. But am going to give you this one, entitled simply 'Sloth':
As chance would have it, one has come to rest
in the attic room, right over my desk.
Upside down, he hangs from the curtain pole
like a shot beast carried home from the hunt,
but the light burns in his eyes; he isn't dead.
A contemplative soul, much like I am,
he's thinking things through, atom by atom,
and hasn't touched the dried fruit and mixed nuts
I left on a plate on the windowsill,
although a mountain range of Toblerone
is thus far unaccounted for. My wife,
the three-times Olympian pentathlete,
wants to trigger his brains with smelling salts,
clip jump-leads on to the lobes of his ears,
stick a bomb up his arse. But I'm not sure:
to me the creature looks dazzled or dazed,
like the Big Bang threw him out of his bed,
like evolution took him by surprise.
Those eyes ... He can stay another week,
till the weather turns. But now back to work:
look, a giant tortoise goes past in a blur.
(Simon Armitage, from Tyrannosaurus Rex versus The Corduroy Kid)
Posted by martine at 19:26