B for Burningham and Blundell

John Burningham's books fall very much into the imaginary world camp of children's writing (I just read on his wiki page that he was educated at Summerhill, so that explains a lot, well it does to me even if Dunk disagrees). 'Mr Gumpy's Outing' and 'Where's Julius' were two of our favourites but the one I have a copy of is 'Oi! Get Off Our Train'. His books all have this lovely soft quality, line drawings with pastels, very simple and uncluttered. The stories are often about children's imaginary play and this one is about a young boy going on a train journey and meeting endangered animals along the way. 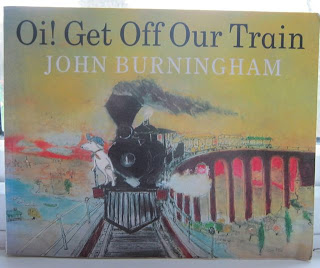 It has a fairly in-your-face ecological message about environmental destruction, with each animal they meet explaining why they have to come on the train because of the threat of extinction.
However once on the train they just fly kites: 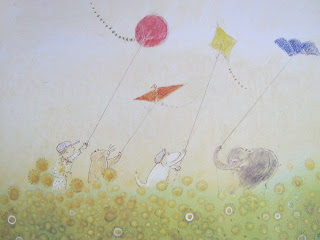 and mess about with umbrellas: 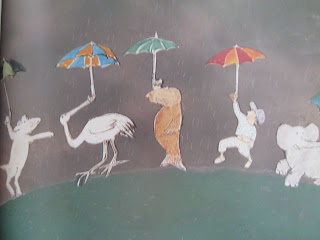 and then get stuck in the snow: 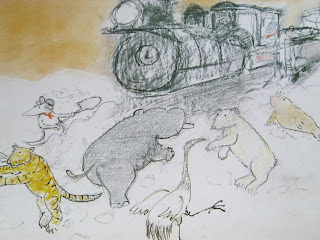 At the end they have to return in the dark through this rather grim polluted urban environment, but the little boy somehow manages to bring all the animals home with him; not a real solution but it plants the idea that as individuals we can do something to influence the wider world.

Honourable mention today for Tony Blundell because these are two crazy corruptions of traditional stories: child versus wolf, and you just know that the wolf is not going to come out of the story well. Although it felt like the 'Beware of Girls' was a little bit of an afterthought and follows a very similar story line they are still brilliantly hilarious books. In 'Beware of Boys' the wolf is sent off to hunt for an increasingly outrageous list of ingredients for recipes to cook his captive: 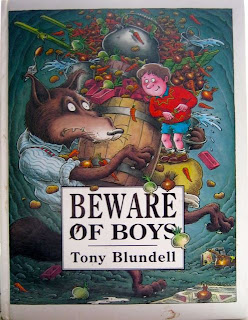 and in 'Beware of Girls' the girl goes to visit her grandma and she persuades the wolf he has to dress up in high heels and a feathery hat and make a trifle in order to gain admittance to the cottage: 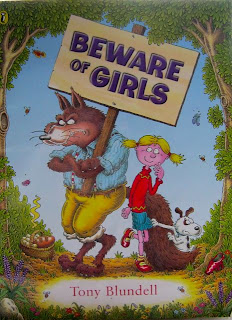