Ok, I confess, he is going to get several other mentions this month, mainly because he is so incredibly prolific, but Quentin Blake gets to have his own post because he is just the best (and his name is a gift for the most difficult letter of the alphabet.) It is a sign of a good friendship to be able to disagree, and my friend Julie really doesn't like these books; I was horrified when I learned this about her but I have tried not to let it come between us. All credit is also due to Russell Hoban who wrote the wonderful stories about Captain Najork, they are clever and witty and imaginative, and I always considered our hero Tom as a role model for home educated kids (he does lots of fooling around and there is no mention of school).

'How Tom Beat Captain Najork and his Hired Sportsmen' 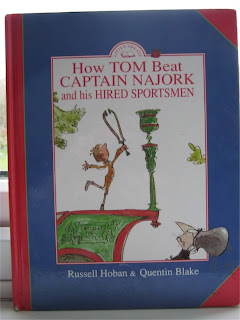 Tom lives with Aunt Fidget Wonkham-Strong who wears an iron hat and makes him eat cabbage-and-potato sog (and who's singing kills small birds): 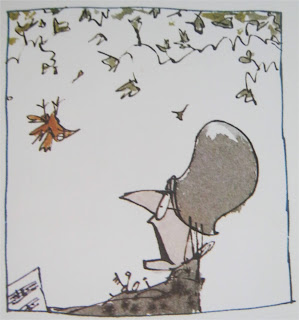 She doesn't like all the fooling around that Tom does and so she sends for Captain Najork, and he comes up the river in his pedal boat with his hired sportsmen: 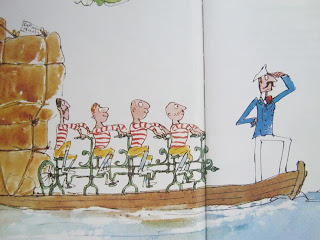 To teach him a lesson Captain Najork is going to make him play some very peculiar games. It turns out however that each of the games is very like certain kinds of fooling around that Tom is particularly good at. Womble is a 'high-up, wobbling and teetering sort of game': 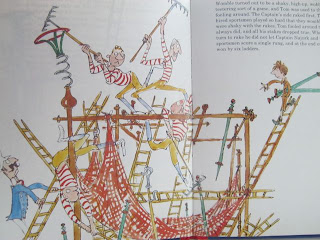 Muck is a slithering and shovelling kind of game: 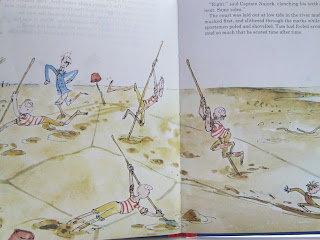 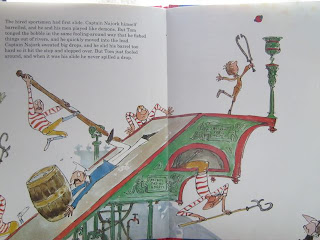 Spoiler Alert: in the end Tom advertises for a new aunt, called Bundlejoy Cosysweet who wears a floppy hat with flowers, and Captain Najork marries Aunt Fidget Wonkham-Stong, 'even though he had lost the Sneedball game, and they were very happy together'.

In 'A Near Thing for Captain Najork' we find ourselves with a love triangle as Aunt Fidget Wonkham-Stong-Najork suspects the Captain of having wayward affections and all hell breaks loose. 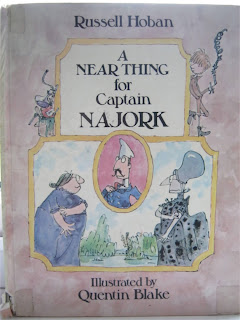 Looking through his telescope one day Captain Najork sees Tom go past with his aunt in their two-seater jam-powered frog: 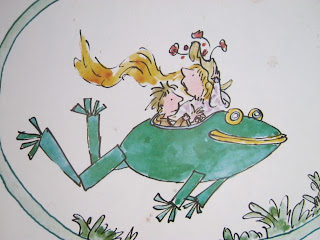 ... so he jumps into his pedal-powered snake with the hired sportsmen. He wants to challenge Tom to some more games, "I'd like how good he is at thud, crunch and Tom-on-the-bottom." 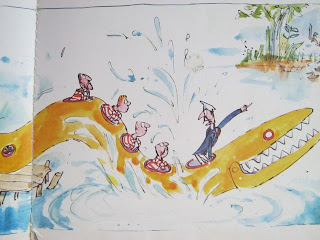 In the exciting climax the headmistress of the girls boarding school across the river challenges Aunt Fidget Wonkham-Strong and they 'arm-wrestle for the Captain on the landing-stage', but fortunately the aunt wins and takes the Captain home for his 'swede-and-mutton slump'.

There is another wild ride in store for Mrs Armitage when she decides to update her bicycle, adding horns, a toolkit, some food, music, umbrellas and eventually a sail to enhance her cycling enjoyment. Another book that I have repurchased, the original story in what is now quite an extended series about Mrs Armitage and her dog Breakspear. 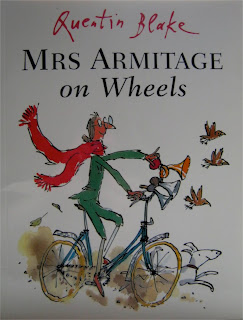