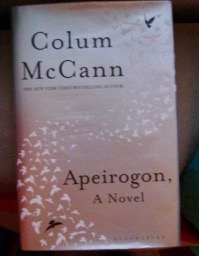 'Apeirogon' by Colum McCann. I have been failing at not beating myself up, and the more I was beating myself up about my inability to settle down and write a half decent book review the less likely I was to actually do it. I renewed it again and still it sat there, joined by two more books, on my bed steps, getting in the way. This is such a wonderful, moving, profound, political book. I was just heart broken all over again to discover that it is about two real men and two real daughters. It is one of those books that your read, and get so drawn in to the lives of people that you stop thinking of them as characters. The inside cover calls it a novel, and no mention is made of the origins of the story, but I just searched the names and found them. It is a book that meanders to make its point, but coming back time and again to the moments of the girls' deaths. The story is told over and over, in the way that in their lives Rami and Bassam have come to tell their stories over and over; to share their pain in the hope of spreading understanding and shaping a new future for their country. It is both hopeful and depressing; the stresses of living in a militarised society is oppressive for everyone and the entrenched situation between the Israeli and Palestinian populations seems insoluble, but the friendship between the two men in the face of their terrible losses is remarkable, to come from such different places and experiences and find common ground.
"Satyagraha: the revelation of truth and the confrontation of injustice through nonviolent means." (p.278)

I think literature helps you understand things in a way that mere information cannot. The history of modern Israel is complex and fraught with contradictions. Stories let you in to people's lives and give glimpses that political analysis somehow lacks. One quote from the beginning of the book, one from the end:

"Rami often felt that there were nine or ten Israelis inside him, fighting. The conflicted one. The shamed one. The enamoured one. The bereaved one. The one who marvelled at the blimp's invention. The one who knew the blimp was watching. The one watching back. The one who wanted to be watched. The anarchist. The protester. The one sick and tired of all the seeing.

It made him dizzy to carry such complications, to be so many people all at once. What to say to his boys when they went off to military service? What to say to Nurit when she showed him the textbooks? What to say to Bassam when he got stopped at the checkpoints? What to feel every time he opened a newspaper? What to think when the sirens sounded on Memorial Day? What to wonder when he passed a man in a keffiyeh? What to feel when his sons had to board a bus? What to think when a taxi driver had an accent? What to worry about when the news clicked on? What fresh atrocity lay on the horizon? What sort of retribution was coming down the line? What to say to Smadari? What is it like being dead, Princess? Can you tell me? Would I like it?" (p.33-34)

One afternoon, in the Dheisheh refugee camp south of Bethlehem, Bassam watched four boys in white jeans and white t-shirts carry a single mattress past the low houses. They moved carefully through the narrow alleyways with the mattress propped high on their shoulders. Placed on top of the bed were four red carnations, arranged in a neat row.

It took him moment to realise that the boys were in rehearsal for carrying a bier. 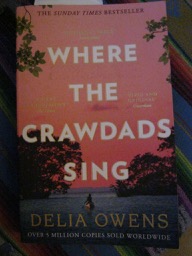 'Where the crawdads sing ' by Delia Owens is, on the other hand, just a novel. I enjoyed the story but if felt predictable; the good people support each other and the nasty people get their comeuppance and the young woman has to have 'wild beauty' as well as being intelligent, but her poetry is really bad. I am not going to bother with more than that. I read it, now it can go back to the library. 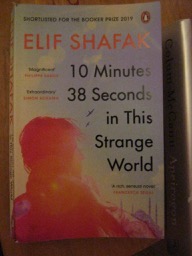 '10 Minutes and 38 Seconds in This Strange World' by Elif Shafak was much more engaging. It reminded me of 'The Ministry of Utmost Happiness' by Arundhati Roy, because it is all about the people and how difficult lives can make for strong bonds of friendship. Leila is dead, but as her brain shuts down memories of her life emerge and we see them as snapshots that make up the significant moments and how she came to be friends with the group of people who then decide they must rescue her from an eternity in the Cemetery of the Companionless. The story is bitter sweet because the friends live at the bottom of society, each of them struggling with their own problems, but making life better for each other.

"Now, as her brain came to a standstill, and all the memories dissolved into a wall of fog, thick as sorrow, the very last thing she saw in her mind was the bright pink birthday cake. They had spent the evening chatting and laughing, as if nothing could ever pull them apart and life was merely a spectacle, exciting and unsettling, but without any real danger involved, like being invited to someone else's dream. On T.V. Rita Hayward had tossed her hair and wiggled her hips, her gown falling to the floor in a silken rustle. Tilting her head towards the camera, she had given that famous smile of hers, the smile many around the world had mistaken for lust. But not them. Dear old Rita could not fool them. They never failed to recognise a sad woman when they saw one." (p.183)

Elif has quite a back catalogue, many of which have been translated from Turkish, so lots to explore.