in the winner's enclosure ...

Well ... it has no title so don't bother asking, it has not much of a plot so don't bother asking ... but I passed the 50,000 word mark this morning at about eleven o'clock. It has lots of lovely happy people living quite contented ordinary lives, there was very little conflict or upset. I said to Dunk that you would only really like to read it if they were your best friends, but otherwise it's very dull. Creature insisted I had to make something bad happen or kill someone. So I did. It made the last few of thousand words fly by, so it was worth the sacrifice.

Creature and I went to the library a couple of nights ago and she picked up a book that was in the wrong place and went to put it back. I opened it at random and began reading, and to my delight/horror I find that I write just like Josephine Cox, so I plan on taking it up professionally since according to her (very brief) wikipedia page she sells a million books a year. 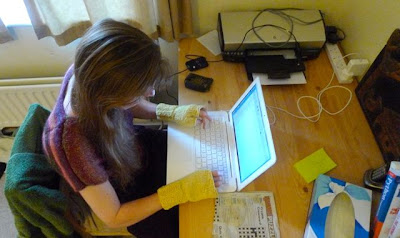 I ended up working in the bedroom and the desk looks very sparse as the treats have been thin on the ground, apart from the endless supply of tea that Dunk has bought me over the last fortnight. The story is not done, in fact I am resisting writing the closing scene and am currently going back to fill in a few of the gaps. The story is all over the place and my biggest task is to make a timeline and ensure that everyone ages at the same rate and people don't talk about stuff that hasn't happened yet. But over at NaNoWriMo they don't mind if it's rubbish, I still get to order my t-shirt.
Posted by martine at 14:23 7 comments:

We now have an empty corner to our kitchen, all this wondrous empty space in which to rearrange the furniture. All because .... after a year of neglect, we have our proper fridge back in working order. Here it is humming quietly to itself in all it's fridgely glory:

It stopped working when we moved house, some little bit of the motor had blown and the refrigerant did not circulate and cool it down, so we used the tatty old one that the previous tenant had so kindly left behind (along with most of his possessions, a washing machine full of washing and a sink full of greasy grill pan!!) It was annoying, and too small and it was silly having a fridge sat uselessly in the corner of the kitchen taking up precious space. It was top of the 'to do' list. One year later it is sorted.
We will however be still using the only decent thing the previous tenant left ... this very cool Abbey Road fridge magnet:-) It has pride of place next to the chocolately butt fridge poetry, and I'm planning to get the rest of the words out and put them up tomorrow. 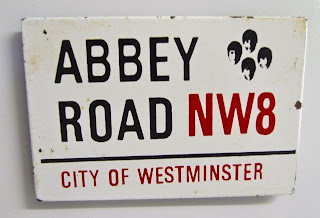 The space has reminded me of the next item on the 'to do' list ... draught excluders for the front and back doors. I am determined it is not going to be another winter of howling gales in our house.
Posted by martine at 21:14 1 comment:

In praise of the iPad 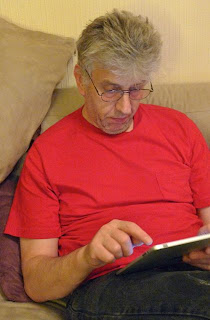 I have been sharing the computer with Creature over the last nine days as we both tussle with the NaNoWriMo situation. When she is writing I have been using Writer on her iPad and am now an utter convert. The damn thing had annoyed me after I bought it because it didn't like Facebook much and that's what she wanted and so she still kept wanting to use my laptop, in fact it had been pretty much relegated to a games machine, plus the Babe has some lovely interactive story books that she really enjoys.
But this week it has really come into it's own. I signed up for Dropbox which is a freebie (for the minimum storage) where you can send your files up into 'the cloud' and they will be safe there until you want to access them. So I type on the iPad after Creature had taken the laptop off to her room, then I upload them to the Dropbox, and then in the morning, while it's still dark, I sneak in and pinch the laptop back and download from Dropbox and put what I have written into my Scrivener NaNo novel file (and then I update my word count total just to annoy her because I am now at over 23,000!)
I was describing to Dunk this morning how much I was enjoying typing on it, and he described how if you take one to pieces you find that the internal components are so carefully arranged to ensure perfect balance of the iPad while you are using it. It just seems so wonderful that the designers have taken so much care and thought. As a user you would only notice such a thing if they had got it wrong, you just take it totally for granted and it is so essential to how it feels when you hold it in your hand. I use so many things in everyday life that are badly designed that I am truly astonished how much I am enjoying it (and I think Dunk liked it that I was finally appreciating the finer qualities of an Apple product.)
(Very very brief excerpt from the first draft over on the other blog.)
Posted by martine at 19:19 1 comment: