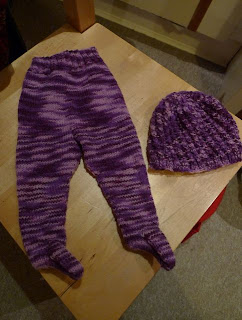 I found a copy of Wolf Hall by Hilary Mantel on CD at the library (2009 Booker Prize winner), I had not been tempted to read it, and it is such heavy going I would probably have abandoned it after a chapter or so, but listening to it I am getting engaged with the events and characters. You have to admire it purely on the grounds of the incredible research it must have taken, to take real historical events and work them so skilfully into what is a reinterpretation of the personalities involved. It is over 24 hours long so it will be next week before I am done with it but I am rather enjoying the less than sympathetic portrayal of the Boleyn sisters. History so often portrays such women as weak victims of circumstance, they are presented here as much more scheming and manipulative, and politically astute.
The baby tights were finished the other day, and there was so much yarn left that I have done a cute little hat to match. It has been a slightly depressing experience to find that the fine yarn was so hard to work with that at one point I resorted to wearing Dunk's reading glasses. We are both vehemently resisting the ravages of age on our eyes, I think I will remain in denial for a while longer:-)
Posted by martine at 21:09 2 comments:

I have been knitting like mad for the last week, inspired by being so pleased with my baby cardigan. I did a very silly frilly dress for the Babe, there is a cute photo of her over on Julie's Blog, but not a good photo of the dress.
Quite some time ago I bought some fabulous Rowan Tapestry in shades of pink and grey at Sew-In in Didsbury and it sat in the stash for quite some time, then I started a waistcoat last year, and it sat for quite some time partly knitted. I got it out the other day, unravelled and re-knitted a mistake, unravelled and re-knitted the shaping, and then decided I no longer liked the pattern at all. I am re-knitting it now as a Cables and Eyelet Hoodie, knitting it directly by unravelling it from the bits I had completed. 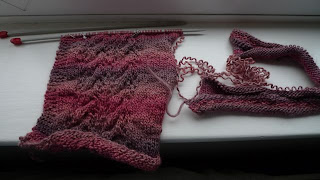 I started another baby cardigan that was supposed to take a single 100g ball, but it didn't, so now I have to unravel this and try something else. 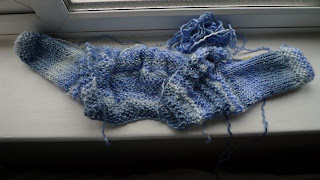 Then last night I borrowed needles from Jules and started on some baby leggings, also for Kim's baby, they are very cute and I will probably have enough for a hat too from this ball of King Cole Zig Zag sock yarn. 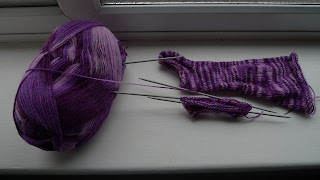 This last project was done from the last bit of home-spun, home-dyed yarn. It is a book cover, knitted on the diagonal, it seemed like an excellent pattern as you can make it was wide and long as you need just by increasing more (sorry, can't link the pattern as it is only a download from Ravelry), here it is partly knitted: 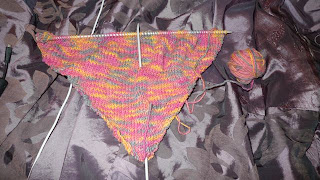 and finished and machine felted. It is a bit big for a novel ... but fits M's iPad perfectly. 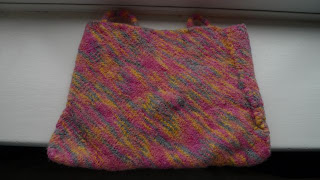 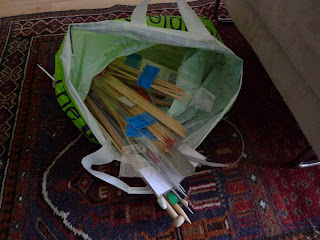 My knitting needle collection has been languishing in a plastic bag since the move and it was getting a little irritating trying to find anything. Inspiration struck this morning while searching the 'craft room' for a box to put them in. So here is a quick tutorial on making a knitting needle box. First find yourself an old box file: 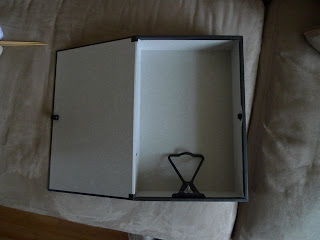 Carefully remove the plastic clippy thing and then cut some card dividers. I used the bottom of an old folder, the card was exactly the right size and the gusset gave me ready made flaps to glue it into place. I made one of the sections smaller to hold DPNs leaving a little section for other bits and bobs. 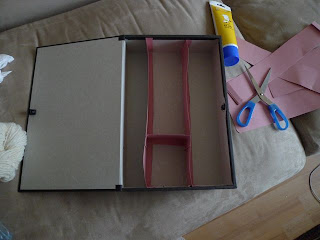 I paired up all the needles using tiny elastic bands, there is a strange little mis-matched pair of number 12's and only one 3 3/4mm needle, but I'm sure it will turn up somewhere. Also home to random crochet hooks, a couple of rug hooks and the felting needles. I had two pairs that were too long to fit so they will be relegated to one of the stash boxes. 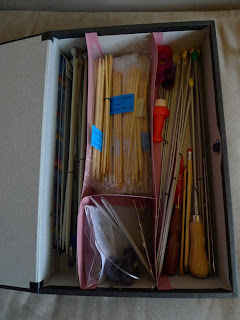 And added a little something on the cover, cut from an old silver gift bag. Now feeling very smug and have to go and organise the stash. 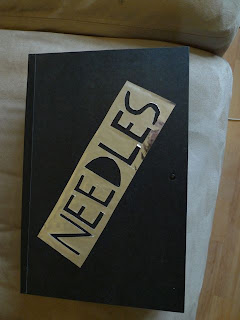 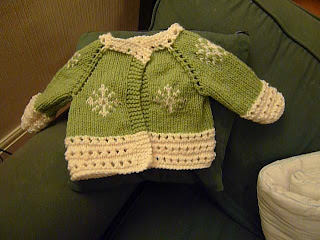 I received a letter at Christmas from my friend Linda announcing that her daughter Kim is expecting a baby. Tish and I jumped up and down with excitement and she sat down and knitted some baby socks. It felt kind of momentous because Linda and I were pregnant together; I was expecting Tish and Jacob and was like a beached whale, she was a few weeks less pregnant with this neat little bump that hardly showed, and now she is an expectant grandma. We were good friends for some years when the children were little but had drifted out of touch. 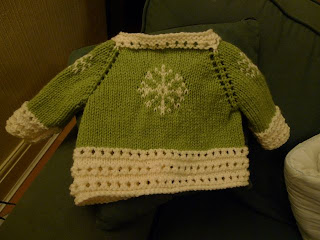 It is nice to have an excuse to knit baby stuff again so I have made this cardigan, and am very pleased with it. It is a simple top down raglan knitted to this pattern, but it is quite plain so I added some simple snowflake designs to the front, back and sleeves. It is supposed to be newborn size but whatever, the baby can grow into it:-)
Posted by martine at 19:36 2 comments: 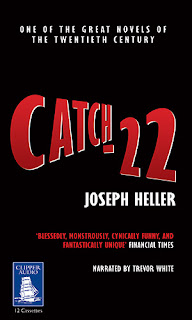 I have been working on this bag project for quite a while now, making slow progress firstly because I needed the circular needles and then because it was just not very interesting to knit. The whole thing perked up when I decided to add a quote around the bag, and after spending quite some time browsing poetry books I decided instead to go for some Dr Seuss, and then spent even longer drawing out this knitting chart on graph paper to create the letters in stitches: 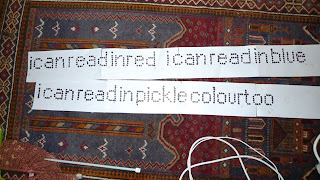 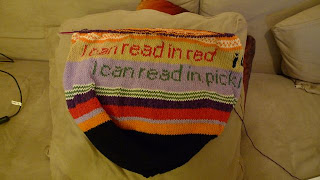 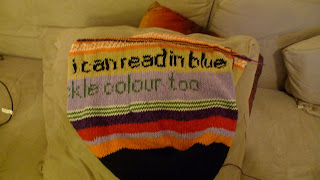 Then as I started to do the decreases for the handles I decided it needed some further embellishment and added some random bits of design to make it more personalised. It is knitted in Rowan Luxury Cotton DK, bought from Kemps Wool Shop (a great source of bargain wools so it is not as extravagant as it sounds). Once the knitting was done I have lined it with some recycled black faux suede fabric: I just cut around the bag to get the shape and machine sewed the two halves together and hand sewed the whole thing around the opening edges 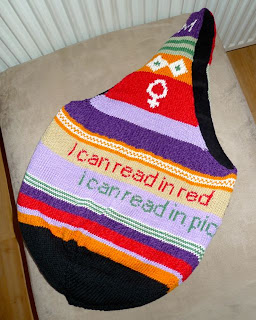 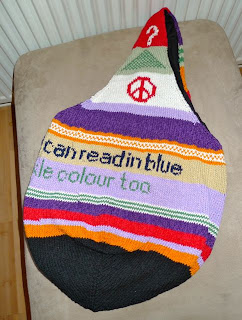 The house that we moved into about 3 months ago is painted entirely in this dull sandy colour, every room the same. As with most rented housed it is designed to be inoffensive to temporary tenants, and boring as shit. We were however told that since we took the house in a depressing state we could have free rein with the decorating:-) It is such a big chore that I was not sure where to start, so I decided to begin at the front door and work my way through the house from there. The first stage of the job started during my week off and finished (sort of, bar a bit of touching up) today, with the accompaniment of Joseph Heller's 'Catch 22' on tape.
Before pictures (though I had started on the skirting boards when I realised I had forgotten to take any) 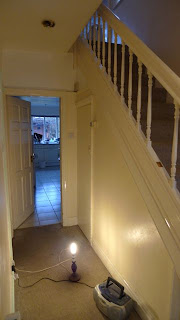 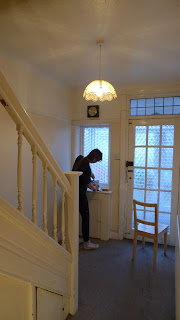 I chose (I could say 'we' but Dunk just agrees with anything I suggest) a sea green colour with duck egg blue for the woodwork. I usually do woodwork white in keeping with family tradition but decided to do something a bit more adventurous.
This is the landing. The doors are all white, partly because I ran out of the duck egg and partly so it was not too overwhelming. Downstairs the doors covered beautifully because they are solid wood, these ones upstairs only look ok on close inspection, they are *very* cheap doors consisting of a frame with two sheets of hardboard nailed on. 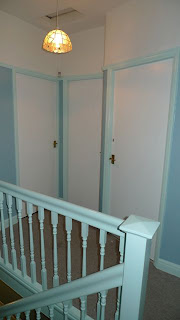 Downstairs looking towards the front door: 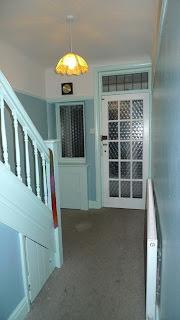 Started taking a couple of photos the other evening down the stairs and realised I was getting an interesting shadow effect from the bannister. The trouble with freshly painted walls is that it has the unfortunate side effect of highlighting how awful the carpet is ... but that will have to wait. 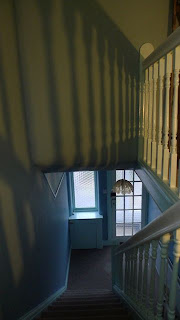 A Spell of Winter 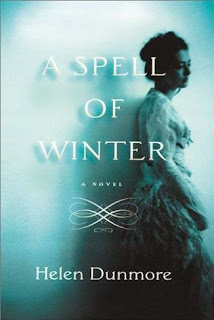 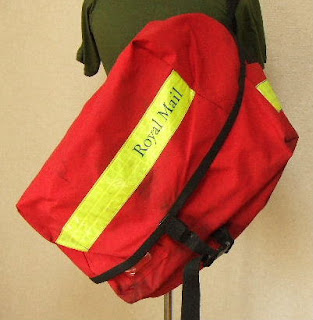 The trouble with working for Royal Mail is that most of the equipment we have is getting old and worn out. My trolley has FIVE old locks attached to it that no-one has keys for, and I can only use one of the brakes as the other just sticks on and has to be forced open. I had the week off last week (more about week off activities soon) and left my delivery pouch in the trolley so whoever covered my duty could use it. Unfortunately for them they decided to acquire it. It was old and battered and had holes; I couldn't use the outside pocket at all and you had to be careful with anything small in the main part of the bag. So this morning I asked if I could get a replacement ... and was given a lovely new one, with no holes.
Posted by martine at 15:58 3 comments: