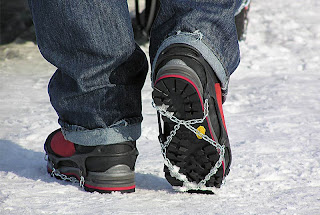 So we've been in Manchester exactly month and we have snow. I carried my bike outside this morning to find the thinnest of coverings twinkling in the streetlight, just enough to make things a little treacherous.
At work I was issued with a set of these fabulous shoe 'snow chains', which felt a little weird to walk on to begin with, but I was very glad of them. Anyway, walking up a path I turned and saw that they were leaving these strange slightly delicate looking prints, rather as if a large bird had just hopped across the snow. And it reminded me of this poem, which I just had to go hunting for to share with you (nothing to do with snow, and I cannot find any info about the author).
traces, fine bird prints
above the tide line
do the grains of sand recall
compressing tight to make that shape
or loosening in the new arrangement?
even after waves, somewhere,
my cells remember how it was
your track etching
-- Lilian Mohin 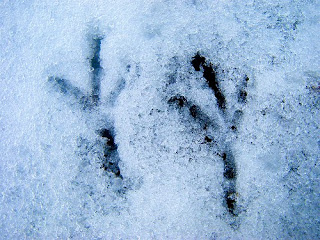 Work Perk of the Week: The Fallowfield Loop 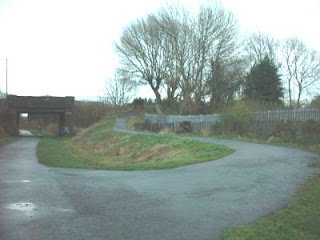 I have been in my new office for just over three weeks now and having walked some and driven some I have finally taken the plunge and got my bike out of semi-retirement. Dunk put new lights on it and bought me a new bike lock so I am all organised. The photo above shows the way onto the Fallowfield Loop, one of the off-road cycle tracks all over Manchester, the path here coming down from Withington Road. From here is it about two miles straight along to the office, going under all the main roads and well away from the traffic (and the potholes and the traffic lights that ignore bikes), it is a pleasure to use. This lunch time the journey home took me a mere 12 minutes and 56 seconds, in spite of having a cold coming on and feeling pretty crap.
Posted by martine at 15:41 3 comments:

Notes from an Exhibition 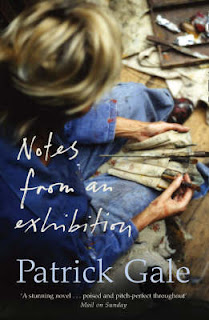 'Notes from an Exhibition' by Patrick Gale was a much better book than the previous offering. Patrick Gale has lots of interesting observations about all sorts of things, from mental health to art to family life, this books really packs it in. I really liked the format, even though the story jumped about and I sometimes wondered for a sentence or two where we were. The chapters are each begun with a little 'note' such as you find next to a painting in an exhibition, describing the object and it's relevance, and they became the means to take you to the different part of the story he is telling.
In Rachel Kelly we have a really beautifully drawn woman, vivid and alive, and tortured by manic depression. I liked the fact that although we finally learn stuff about her early years there is no attempt to try and explain away her mental problems, they are just part of her personality, shaping her life and experiences and most importantly her art. We start the story with her death and the purpose of the exhibition is to tell her life story, to try and bring together the events that shaped her and her family. It is also very much a book about family relationships, her slightly strange and mysterious relationship with her husband Anthony, through to the more fraught and ambivalent ones with her four children, and the impact that she had on all of their lives. Although Rachel is the central character of the book she does not dominate it, in fact she is quite shadowy and secretive. Her art is an all consuming passion that is central to a life that has been very turbulent. As a young woman we discover that she resisted diagnosis and although she does for some time appear to accept the label of 'bipolar' and the treatment that accompanied it when Hedley (her second son) is clearing her possessions he finds a drawerful of medication. It seems that she had been pretending to take it but not, preferring, it appears, the emotional turmoil that came with her illness but that seemed vital to her artistic inspiration to the muted stability that the tablets provided.
The book is however about the whole family not just her: Anthony, her husband, also slightly enigmatic, rescues her by chance after a suicide attempt and his quiet presence becomes her solace and salvation, taking her back to his home in Cornwall where she discovers a world that suits her needs. Garfield is the oldest son, slightly distanced from his mother but seeking approval, who discovers on her death that Anthony is not his father and there is a slightly strange interlude where he goes off to find another 'family', but returning to find himself more secure in his real one. Hedley, second son, spent his teenage years struggling with his sexuality but is really the most emotionally secure of all the offspring. Morwenna, the only daughter, is mysteriously absent from the funeral and has obviously been gone some time. It is later in the book that we discover she is blighted by the same mental health problems as her mother and has chosen to lead an itinerant life and keep her distance from people, her family included, to spare them from feeling responsible for her wellbeing. They only know she is still alive because occasionally they hear that she has sold one of the birthday cards her mother had painted for her. As if by the quirk of fate she ends up returning home some weeks after the funeral and finally allows her family to care for her. Petroc is the baby of the family, beloved and mourned, having been killed in an accident when still a teenager. The book weaves their lives together, telling their separate stories but bringing them all back to the home and history they share.
There is also the issue of Quakerism, not something you come across in novels very often, very spiritual without being overtly religious, and used I felt as a stark contrast to the emotional turmoil of Rachel's problems, and also something that binds the family together as a shared experience. And then there is a wonderful cameo appearance by Barbara Hepworth, that just anchored the story a little more in the real world, making Rachel part of a real artists community. I enjoyed the pieces about her art and I was left wishing I could actually see some of the paintings described.
Rachel's history is deliberately mysterious and Gale gives an interesting twist to her story and leaves the reader mostly, I felt, with a message about the importance of family, that blood links are important, but that family is also what you have created with the people who share your life. The book is clever and thoughtful, the characters are beautifully created and you feel drawn into their lives. I liked this book very much and will definitely be reading something else by Patrick Gale.
Posted by martine at 20:05 2 comments: 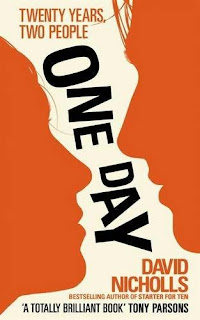 One Day by David Nicholls
I think that it doesn't bode well for this book that I am not left with much of an impression of the writing or events. I had to give the book back to the library because of the move so cannot refer back to it. I have also read 'Starter for Ten' a couple of years ago, the story of a young man's obsession with University Challenge, but it was only a passing entertainment. So 'One Day' is the story of Emma and Dexter, told in chapters that each tell the story of a single day over twenty years, following the ups and downs of their lives and loves from the end of their student days through to middle age.
I was left totally unconvinced by the whole thing. Their relationship seemed to have very little basis; Emma having had a crush on Dex for some time and they end up together very briefly at an end of year party. After spending an uneventful day together they start up a casual correspondence, Dex writing monosyllabic postcards from his exotic jaunts and Emma responding with long missives about her terrible job in a fast food restaurant, desperately trying to hide her growing feelings for him in the face of his apparent disinterest. Dex's life is on a roll, quickly moving into being a celebrity television presenter with a glamourous lifestyle and girlfriend to match, while Emma slogs it out with the Mexican food. In some of the chapters they meet, in others we just catch up on what has happened to them, sometime several years go by without them seeing each other. Dex goes into decline with the drinking but then finds the girls of his dreams, marries and has a daughter, while Emma trains to be a teacher, works in an inner city comprehensive and settles into a long term relationship with a man she appears indifferent to. As Dex's life goes further into decline with the breakup of his marriage, Emma's finally takes off as she starts writing children's books based a young girls she encounters while putting on the school play.
SPOILER WARNING
So predictably they finally get together, Dex treating Emma like some kind of 'fallback' when his life has really gone down the toilet, turning up out of the blue and just assuming she will fall willingly into his open arms ... which she duly does. I sort of liked Emma but she was such a doormat, the kind of character that many male authors create to serve as a foil for the bloke who the story is really about. Dex is just such a tedious, self-indulgent, self-absorbed egotist that I wanted her to finally see through him and be happy with someone else, when really all she was doing was apparently waiting for him to 'grow up' (which in my opinion he never did). I only stuck with the book because I kept hoping that he was going to do something interesting with their relationship. Nicholls tried to redeem Dex by making him a half-way decent father to his daughter and making him start up his own business and actually do some real work for the first time in his life but I was not convinced, he is all charm and no substance. And then he kills Emma off! And just to prove my point Dex goes right back to his old ways and drinks himself into an oblivion of self-pity, only to be rescued by his ex-wife and his elderly father (why the man inspires such devotion remains a mystery to me) and we end the book with him settling down with the manager of his shop a few years later.
What can I say ... it was just plain irritating.
Posted by martine at 09:49 1 comment:

What is the world coming to! 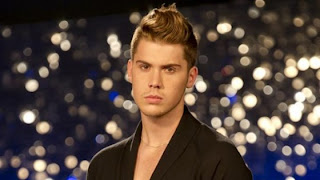 All sorts of things have happened since my last post but the thing that left us speechless at the weekend was the eviction of Aiden from X Factor. Well, I say speechless, but M was shrieking at the telly in disgust.

So here we are in sunny Manchester. 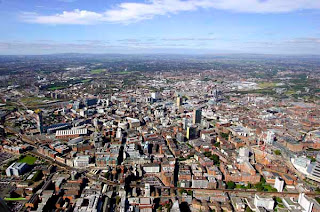 I won't bore you with the trauma that is moving three people, a cat and their possessions over 100 miles using only a small van and our own blood sweat and tears, needless to say I am glad it is all over. In between moving furniture, carrying boxes, cleaning (and yet more cleaning) and going to work I have done a bit of reading, so I will try and write something later about David Nicholls 'One Day', which was much hyped but left me a bit cold. Am currently reading 'Notes from an Exhibition' by Patrick Gale.
Posted by martine at 16:52 5 comments: