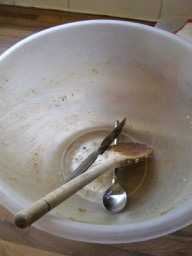 I have been learning all sorts of things while we have been gymming, mostly from Tish as she has been doing this stuff for several years already. I know the names of quite a few muscles, including the supraspinatus muscle, and how to stretch them. The stretching can take as much as 20 minute when we get home, but to be honest it is worth the pain because we have (mostly) not suffered from aches and stiffness from our efforts. The other important thing when exercising is protein. When you work your muscles you need to help them recover, and a hit of protein when you finish can help. I have always added bits to the basic Cranks flapjack recipe but it is a wonderfully easy recipe to supercharge with good things.

5oz margarine (butter if you fancy)

big spoonful of molasses (for the iron)

4oz combination of your preference: sunflower seeds, sesame seeds, pumpkin seeds, linseeds (I whizz up the pumpkin and linseeds in the blender) or chopped nuts

This is way more dry ingredients than their recipe so it can be crumbly but I find theirs much too syrupy. Press firmly into a tin and bake 180 degrees 20-25 mins -ish. Keep an eye on it, it's a fine line with flapjack, I like it still a bit chewy, it's easy to slip over and make it too crunchy, unless of course that's how you like it. Chop into pieces while warm, it's impossible once it's cooled. Take some with you and eat as you walk home. 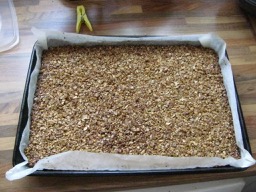 So much for trying to post more, that didn't last long ... or at all. Was going to post yesterday. Came home from Dunk's and hunted on youtube for a Nestlé advert that we saw on the telly but couldn't find it. They had a young girl having her hair plaited up and she was the spitting image of Greta and I was fuming that they dare try and associate themselves with her, this is a company that fucking steals people's water.  Am on leave this week and it has been so nice; Dunk and I took a lovely walk down to Sale Water Park on Tuesday and then rode our bikes up to the Gorton reservoir again on Wednesday. I was supposed to be holidaying in Cornwall with mum and dad and Claire, but the local lockdown spoiled that so I am trying to just enjoy the autumnal sunshine in Manchester. 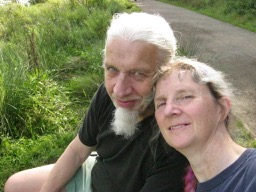 Gym and swimming and volleyball stuff just gets dumped as we come through the door so the house remains a bit of a tip, but we are all pretty fit so I'm not beating myself up about it. We have done six weeks so far and have established a good routine. I am liking the gymming more than the swimming, but some days we have even done both. I still can't do a sit-up though. 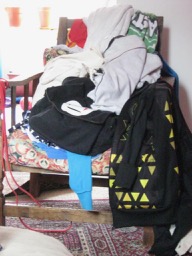 Cute photo of Lyra in one of the craft boxes. We had a new puzzle out and use the lids for pieces so she has a new favourite place to snooze. 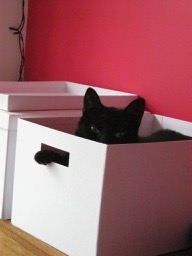 I found this blue tub out for the bin men when I was on delivery a few weeks ago. This is a physocarpus opulifolius, it will grow to six feet or so and provide some much needed height and bushiness. It will flower in the summer and then produce berries in the autumn. I ordered two bags of compost and the tub took almost a whole one so I can see I will need more pretty quickly. 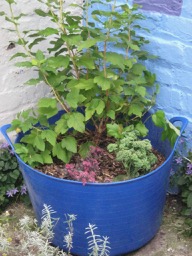 Potted up the borage plants, which are now real plants, not seedlings. They have come on a storm, enjoying the warm weather on the kitchen window sill (outside) and am looking forward to filling the garden with them next year. 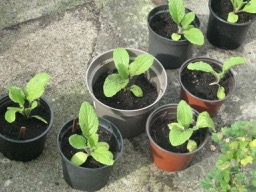 I worked a day off last week so have had two trips to the garden centre; went back a second time (with the girls to help carry) and acquired several big preloved planters. I have been looking to buy some but terracotta is quite expensive and I did not want to buy plastic, but second hand is perfectly acceptable. Am thinking of looking for spray paint to jazz them up a bit. 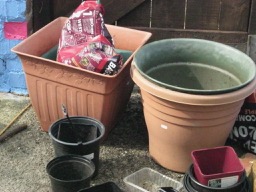 #100DaysToOffload
Posted by martine at 13:41 No comments: 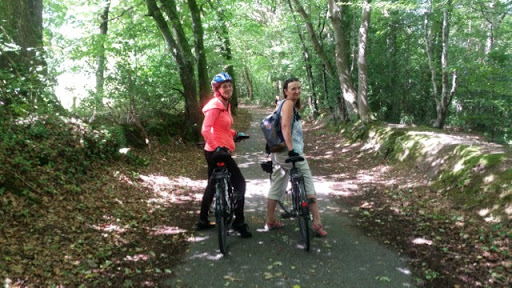 Some members of the clan have been having an exciting time buying new houses in Devon with panoramic sea views and going on dappled sunlit bike rides with the oldies ...
some of us have just been going to work and coming home and not writing any book reviews. 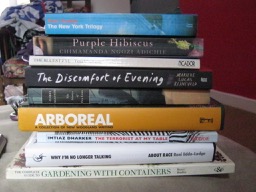 This is a bad pile. I have had backlogs before but this is bad. From the top:
'The New York Trilogy' by Paul Auster. I read, and loved, 4321 back in 2017 but after I read the first two novellas, that were too alike in theme and character, I crawled to a halt on the third.
'Purple Hibiscus' by Chimamanda Ngozi Adichie was quite a hard read. I found I hated the controlling and violent parenting so much that I was just angry at the situation while I read; angry at the mother for not protecting her children, angry at the respect for religious people that allows such behaviour to go unchallenged. Have read several others by her that I enjoyed more, here, here and here.
'The Bluest Eye' by Toni Morrison is another one that made me angry, but for the grinding and inescapable poverty of their situation as much as for the people's behaviour.
"The Discomfort of Evening' by Marieke Lucas Rijneveld has just won the International Booker Prize but I bought and read it some time ago. I don't want to say it was another book that made me angry but it was. What is it with people writing about stifling religiosity, anybody would think that all religion is controlling and stifling ... oh wait, it mostly is. It is a story of loss and people crumbing under it. When Matthies dies the parents just kind of fade away, leaving their remaining children to emotionally fend for themselves. I cared about them and wanted to wrap them up and reassure them, to reassure Jas that it was not her fault. I loved the relationship between Jas and Hanna, her younger sister was the saving grace of the story, which made the ending all the more traumatic. I got to the last page, the last line, and cried out in horror, but of course I should have seen it coming. The naive, optimistic part of me wanted to believe the love of her sister would pull her through, but it didn't.
'The Stories of Eva Luna' by Isabel Allende was just a lovely collection of stories, some funny, some a little dark, all about the characters and their intriguing lives.
'Arboreal' edited by Adrian Cooper, subtitled, a collection of new woodland writing, was a lovely collection of people just writing about woods that they know and love. Some were very lyrical or childhood remembrances, others much more scientific or expounding on the ecological significance. The sheer variety kept it interesting throughout. Having experienced much tree joy this year what's not to love in a book all about the joy of trees. 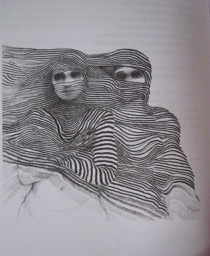 'The Terrorist at my Table' by Imtiaz Dharker. I came across one of her poems in the Guardian back in April and very much enjoyed the rest of her collection (you can read several on her website). Unusually for a poetry book it was punctuated by her atmospheric line drawings. I lost the paper on which I listed my favourites. They managed to combine the personal and the political with just lovely evocative images and use of language. I have to pick this one, just because ... tea (I also love the one entitle Tissue). Maybe the literature festival will invite her some time.
The right way
You call this
tea?
Black brew, no sugar, raw milk?
Let me tell you how it should be.
Put the water in the pan.
Add sugar, more than that,
more. Then boil it
till it becomes quite syrupy.
Now add the tea-leaves,
let them boil, to get
your money's worth from them.
This is when
my wife would put in
ginger, cinnamon, or seeds of cardamom.
You have none of those?
No matter, let me show you.
Put milk now. Boil again,
yes, boil. Let it rise,
turn down the heat.
Turn it up, let it rise again,
sizzling. Blow on it to keep it
bubbling just inside the rim.
This takes skill, and shows respect
to both tea and guest.
Then take the cup
and strain it in. No,
don't drink yet,
I am showing you the way
we drink tea in my village.
Pour it in
to the saucer, blow.
Now drink. Don't shake, don't spill.
Don't laugh.
Good, no?
'Why I'm no longer talking to white people about race' by Reni Eddo-Lodge is a highly recommended and thought provoking look at the race situation in Britain. So much is being said in the news about race in America at the moment that you sometimes find British people being a bit smug, but you know what, we are as fucked up as they are. Our history is as fucked up, our economy and education systems are as fucked up, our criminal justice system is as fucked up. There is no area of life where people of colour do not get the short end of the stick. If that's not systemic I don't know what is. People complained the other day about an Argos advert with a black family in it, and you want to smack your head off a brick wall. You know what, don't be sorry, don't be defensive, don't say 'yes, but', just accept that this is the reality of our society and see what you can do to challenge it. Reading books is a good first step because it's important to know what you're up against.
I borrowed the Gardening with Containers from Julie and have enjoyed browsing ideas and learning about plants and compost and all that jazz. I also found 'How to Garden' by Alan Titchmarsh in the charity shop which has been great for all sorts of basic stuff about growing plants. I am getting much joy from seeing things grow and want to do more
I know I have gone back to living inside my own life recently, well, since I bought the house really. It feels selfish. Going to the gym and caring about being fit feels selfish. I could have gone and joined with with some XR stuff in Manchester but I didn't want to. I feel like I am hiding, but you know what, I am not beating myself up about it, it's just what I need to do right now.
Stay safe. See you tomorrow.
#100DaysToOffload