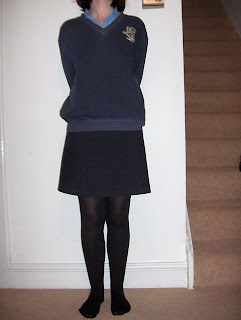 So here are two nearly identical photographs ... the question is, can you spot the difference? They both look quite smart presentable uniforms, just the way most young people are obliged to dress these days while they attend school. In spite of the fact that the rest of Europe and the United States don't seem to think that young people need to wear identical clothing in order to learn efficiently, our country seems to have made quite an issue of the whole uniform thing with younger and younger children being obliged to dress like their peers when they pop along to playgroup. Many positive claims are made about the wearing of school uniform, such as creating a feeling of being part of a community and avoiding the perils of being marked out as a 'loser' if you wear the wrong clothes ... so I was not really surprised when we find the claims becoming more and more outrageous. 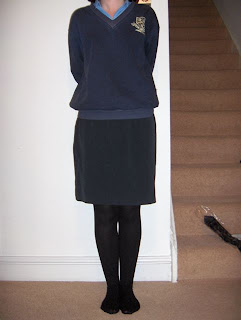 Believe it or not it seems that the girl in this second photograph is definitely going to be a better learner .... all because of those few extra inches of fabric in her skirt. Oh yes, the Head Teacher and Board of Governors decided in their wisdom that from September all skirts must be knee length. We all know how hard it is to learn properly with a bit of your thighs showing.
But we are celebrating in our house because it was not an hour after we went to the new uniform event at school and purchased this skirt (and paid for the blazer that they are also re-introducing) when M's dad phoned to say he will agree to her leaving school and return to being "educated otherwise than by schooling". So now she can learn in her jeans and in her pyjamas and in her short skirts and in her long skirts and in her bikini and in her shorts and in her hoodies and in her hats (of which she is very fond) and with nail varnish on and with electric blue hair and at midnight and 6am and in the garden and up a tree and anywhere and anyhow she choses.
Posted by martine at 18:50