Life, death and all that 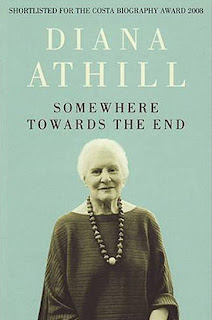 'Somewhere towards the end' by Diana Athill, is the most recent of Athill's memoirs, written when she was 89. I am going to include this in my Women Unbound Reading Challenge because it seems a very appropriate book. She is quite a remarkable woman who has lived a life that challenged many of the assumptions about the way women should live. As a young woman she was abandoned by the man she was supposed to marry, and instead went on to have a long and successful career in publishing and to carry on a series of unconventional affairs, ending up living for 40 years in a comfortable arrangement with a former lover.

While there is a certain amount of reflection in this book it is much more about the adjustments, demands and compensations of old age. She is already well known for her candour regarding her sexual life, though very discreet she did conduct several affairs with married men during her life. This book reflects at length on the decline of her sexual life and adjusting to this new idea of herself. There is a sense of regret at this aspect of growing old, but she is very accepting of the changes. Her own health seems to have been remarkably robust, certainly she describes nothing life shortening, but she finds herself having to take on a caring role, initially, in her seventies, for her mother, and then again over recent years for her cohabiter Barry. In both situations not something she has relished, but something she has endured philosophically. She also discusses the idea and imminence of death, describing her mother's death most poignantly, and another experience at a crematorium which seemed to have quite an impact on her, emphasising the everyday nature of death.

Several of the chapters talk about the things that she has done to try and adapt to old age, the things, like gardening, reading and writing, that have provided her with enjoyment, and solace for the other pleasures that have waned. It is lovely how she is such an optimistic person and takes pleasure from the smallest thing. She is discussing relations between the generations, and how the old are viewed by the young:

"So if when you are old a beloved child happens to look at you as if he or she thinks (even if mistakenly!) that you are wise and kind: what a blessing! It's not that such a fleeting glimpse of yourself can convert you into wiseness and kindness in any enduring way; more like a good session of reflexology which, although it can cure nothing, does make you feel like a better person while it's going on and for an hour or two afterwards, and even that is well worth having." (p.84-5)

She tells some wonderful little personal anecdotes, in particular one about great-aunt Gertie, who's scandalous behaviour became a family secret. She was plainly somewhat exploited in her role at Andre Deutsch's publishing company and appears to have reached old age without much financial security, though I guess she is the kind of woman who would have found it hard to retire any earlier than 75 anyway, and her retirement has been pursued with such vigour that she has done much of her autobiographical writing during this time. She does talk a little about people she encountered during her publishing career, but I plan to seek out her other books which no doubt discuss it in more detail. She is the second writer recently to specifically mention W.G. Sebald as remarkable (Susan Hill being the other) and I found a copy of his book 'Austerlitz' in a charity shop recently, so it may very well move up the TBR pile based on this second recommendation.

The part of the book I found quite moving and interesting was when she discussed her childlessness. She admits to having had abortions as a younger woman, viewing herself as somewhat devoid of maternal instinct, and when she finds herself pregnant surprisingly at the age of 43 she assumes inwardly that she will do so again:

"But when I caught myself making excuse after excuse not to take the necessary steps just yet; I hit on the truth ; I wasn't going to take them at all; and at that point I suddenly became happy with a happiness so astonishingly complete that I still remember it with gratitude: my life would have been the poorer if I hadn't tasted it, and any child to emerge from that experience could only have been loved." (p.163)

The pregnancy ends at four months with a potentially life threatening miscarriage, an experience so frightening that it overshadows the loss of her baby; she is so glad to actually be alive her response to the loss felt, to her, somewhat muted and relatively short lived. She acknowledges freely her ambivalent feelings towards small children, but as she has got older the pleasures of other people's children, most especially those of Sally (a former lover of Barry's who lived with them in an unusual domestic arrangement for some years), seem to have becomes more significant. In the chapter about regrets (in which this quote appears) childlessness is not one of them. What she does regret is the idea that she was essentially rather 'cold' and that was what made her chose not to have children. Her only other regret is her laziness. It seems like a strange thing for such a woman to accuse herself of. Reading this book I wish I could achieve half as much in a lifetime, but she talks about all the various other things she wishes she had learned, places she could have visited or things to be achieved, and she puts it down to just being happy with the little niche that she carved out for herself and liking a nice quiet settled life. Earlier in the story she had talked about how hard it was for her to become a carer for her mother because of how much it disrupted her own life, how she arranged things so she did not have to move in with her. It is this essential honesty that draws you to her and makes her so likeable. She doesn't mind (another perk, she admits, of old age) what anyone might think of her, and so can be open about her own shortcomings.

I think she felt the need to end the book with a 'life philosophy' chapter, I guess you can forgive her a little self indulgence, because in essence old people can't help but think they have some wisdom to pass on. Her conclusion is not startlingly original, but it is wonderfully expressed:

"The majority of human being leave their genes embodied in other human beings, others things they have made, everyone things they have done: they have taught or tortured, built or bombed, dug a garden or chopped down trees, so that our whole environment, cities, farmland, deserts - the lot! - is built up of contributions, useful or detrimental, from the innumerable swarms of selfs preceding us, to which we ourselves are adding our grains of sand. To think our existence pointless, as atheists are supposed by some religious people to do, would therefore be absurd; instead, we should remember that it does make its almost invisible but real contribution, either to usefulness or harm, which is why we should try to conduct it properly." (p.180)

I loved reading this, mainly because this lady is twice my age; I feel like life has been pretty long already, that so much has happened, and to think that I potentially have the years left to do as much again is just wonderful. This book is a real celebration of life, from the perspective of age, but not just a celebration of what is past, because although she ends with a contemplation of what her final words might be, she is definitely not thinking that this is the end.
Posted by martine at 17:42