I so hate living with other people's curtains, one of the downsides of rented housing. They are invariably old and nasty. The ones in our current living room were quite nice really, just cream patterned, and lined, so not that cheap when they were new. However the curtain rail had been the cause of some problems and, having come loose twice already, was wedged in place in a hole in the plasterwork at the corner of the bay window. When Tish was round for a visit the other day she went to close them and the whole thing came down. So today I decided to return to my favoured method of curtain fixing ... the staple gun. This is a great tip for people not keen on the whole palaver of having to buy rails to fit, and drill stuff and most of the time the plaster is all crumbly and you end up having to buy huge quantities of filler and kind of cement the whole thing in place. Just too much bother. So here they are. I then took the hooks that were in the wall on either side of the bay and screwed them into the window frame so I can tuck the curtains up during the day. It has the nice side effect that we are no longer overlooked by the neighbours when they come out to use the bin (which they seem to do on inordinately frequent occasions). 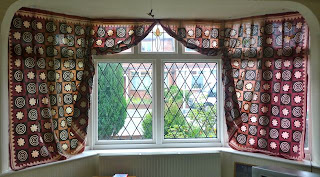 These 'curtains' were bought as sofa throws from Shared Earth many many years ago. One had been cut up and made into a cover for a futon, and then sewed back together into one piece when I used them as curtains in my house in Cecil Street. You can see the original colour on the left hand edge there (that's the bit that was cut off and so is not faded). I have always loved them because they were some of the very few non-functional items I ever bought for my home at a time when we were very hard up.

And I have also been doing cosmetic preparations for NaNoWriMo. This is my desk. It used to be Dunk's desk but the 'study' is too tiny for it so he has a table and lots of stuff in boxes instead. I cleaned it up the other week (it had become a bit of a dumping ground for washing and crafty stuff) and put up this hanging (also with the staple gun:-) that the girls bought for me (you might recognise it from the home made christmas tree post). I am sitting here now writing this, just to see what it feels like to write at a desk, and if the chair is ok, and if the light is good. It looks all very bare at the moment. I am thinking that, as I did with the christmas tree, I can pin things to the hanging like a notice board, maybe pictures or inspirational quotations to encourage me, stuff like that. 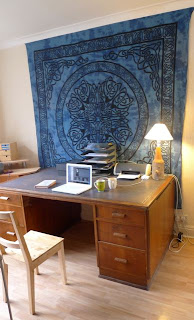