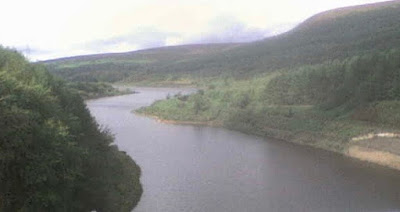 It is over a year since Monkey and I did part two of our Pennine Way walk. We have been put off part three because it is a very long way from Hadfield to the next place where you can get to a railway station. Feeling in the need of getting away from the city we studied the map on Saturday and found that there was a footpath that left the main route and cut across the moor to the Chew Reservoir, ending up in Greenfield. It seemed like a manageable distance.
So yesterday we took our sandwiches and headed back up the Trans Pennine Trail from Hadfield. We wandered off the path the first time as we headed uphill, finding ourselves clambering up the side of a stream, having to struggle across a boggy patch and managed to rejoin the path on the ridge at the top. Then we came across this helpful sign: "DANGER DEEP BOGS please keep to the main path". Next time we'll be more careful. 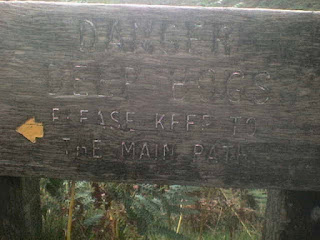 At our first rest stop we chose a lovely big flat rock to sit on, only to find some disgusting people had chosen to stuff their rubbish down the crack in the rock. This was no accidental littering but obviously quite deliberate. I pulled it all out and carried it home. 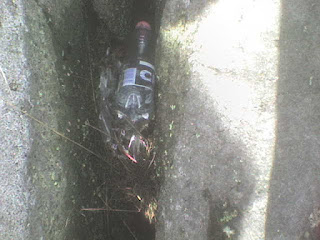 We only walked about three miles along the Pennine Way before taking our turning. This was the one place where we managed to take the correct path despite there being no sign. Basically, for the next couple of hours we followed the stream, first uphill, then, apparently the same stream, down the other side. There was not really much of a path, mostly we had to climb up onto the heather to avoid the bogs. I definitely would not recommend this route. We assumed the stream would lead us to the reservoir, which it duly did.
There are very, very few trees on the top of the Pennines, but we came across this random Christmas tree ... how the hell did it get here ... and now I want to go back up in December to decorate it. 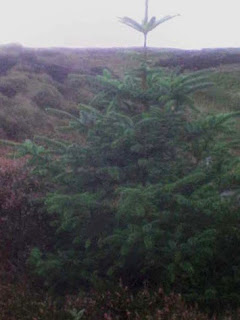 There was still not much path as we skirted the reservoir but we finally arrived at the dam, and once again took the wrong path. I looked across the ravine and saw some walkers confidently striding up the paved road on the other side, and persuaded Monkey to take another look at the map. At the bottom of the long descent we again found the correct path, the Oldham Way, taking us away from the Dovestone Reservoir and towards Greenfield. As we arrived at the edge of the town we were supposed to find a path leading down into Greenfield. We ended up just tromping across a couple of fields, avoiding the highland cattle and shooing away the aggressive sheep. The trains back to Manchester are only once an hour. The 16.46 train pulled out as we trudged up the road towards the station. We made it home about 7. 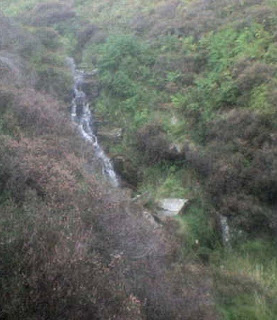 The Pennine Way distance calculator shows a walk of 10.87 miles, rising to a high of a mere 1750 feet. We have currently completed approximately 17.3 miles of the 267 mile route.