"he found himself here in a world that had no meaning for him, meaning being a thing human beings constructed out of familiarity, out of what scraps they possessed of the known, like a jigsaw puzzle with many pieces missing. Meaning was the frame human beings placed around the chaos of being to give it shape" (p.193)

I felt ambivalent about 'Two Years, Eight Months and Twenty-Eight Nights' by Salman Rushdie (though the front page of his website is an interesting collage of images). In it the world is invaded by strange forces and even stranger beings, and Geronimo Manezes, a perfectly ordinary bloke, finds he has the fate of the world in his hands. The human beings are just powerless victims of the jinni that have arrived, but the jinni are just all powerful destroyers with no particular aim in mind and little to distinguish between them. It makes numerous references to 1001 Nights and I kept expecting tales to emerge during the story, but it just turned into a battle for the world, with a somewhat predictable ending. Faintly unsatisfying. Sometimes I dislike a book when you get the feeling that the writer is trying too hard to be clever, but this is Salman Rushdie; I just was unconvinced by the fairyland thing and the motivations of pretty much everyone. Sorry. 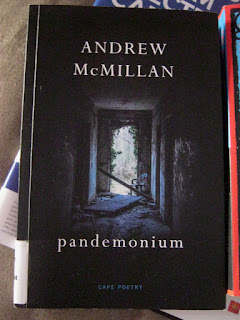 I ordered 'Pandemonium' by Andrew McMillan after reading a Guardian review. They manage to be both clever with words and images, creating allusions to more abstract thought and emotion, and also about something real. That's a hard thing to pull off in my opinion. Really liked this one, from the section entitled Knotweed: 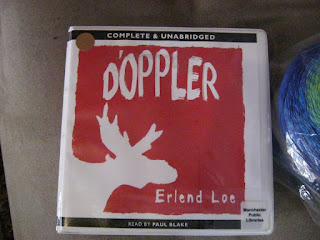 It seems like the library has mostly done away with actual audiobooks, what with the downloading thing that everyone likes to do, but I found this one, when I went searching for this book (probably another Guardian review). 'Doppler' by Erlend Loe is about a bloke (lot of them about) who begins to question everything about his life, and so walks away into the forest and abandons everything and everyone. He kills an elk (to eat, not for the fun of it) and is then adopted by it's orphaned calf. They have a nice contented, quiet life together, pilfering from unguarded houses and suchlike, until people begin to intrude back into his life. It is quite surreal and made me laugh out loud, which is not something that reading has done for me in a while. He talks to and about the elk as if it were a friend, it's a nice relationship. I totally get where he was coming from when he tries to steal a giant toblerone. You can't help but admire his single minded pursuit of avoiding the world, but somehow keeps drawing it to him. The unabashed thievery is refreshing. An unlikely hero for our time. Highly recommended. 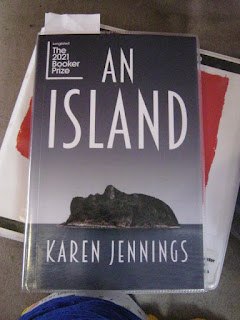 'An Island' by Karen Jennings was serious reading, longlisted for the Booker this year. I see she is South African but the book feels like it has been translated from something east european. The country is unspecified but has a troubled and chequered political history. Samuel lives as a lighthouse keeper, but mostly it emerges because an extended prison stay has left him unable to function around people. He looks after his chickens and grows some vegetables and once a fortnight the boat brings him some supplies. A man washes up on the shore, alive rather than dead like most of the flotsam, and over the course of the following days an uneasy relationship develops between the two, who cannot understand each other. We learn the story of the rest of Samuel's life; as a young man he joined a political organisation opposed to the government. He was arrested, imprisoned, tortured, then ostracised by the other prisoners when they suspected him of collaborating. He is eventually released after 25 years but understands little of what has passed in the world outside. You begin to understand the suspicion he feels towards the man.
"There had been thirty-two of these washed-up corpses during the twenty-three years that he had been lighthouse keeper. All thirty-two nameless, unclaimed. In the beginning, when the government was new, crisp with promises, when all was still chaos, and the dead and missing of a quarter of a century under dictatorial rule were being sought, Samuel had reported the bodies. The first time officials had come out, with clipboards and a dozen body bags, combing the island for shallow graves, for remains lodged between boulders, for bones and teeth that has become part of the gravelly sand.
'You understand,' the woman in charge had said, as she looked down at a scuff mark on her patent-leather heels, 'we have made promises. We must find all those who suffered under the Dictator so that we can move forward, nationally. In a field outside the capital, my colleague found a grave of at least fifty bodied. Another colleague discovered the remains of seven people who had been hanged from trees in the forest. They were still hanging, you understand, all this time later. Who knows how many we will find here? I am certain it will be many. This is an idea dumping ground.' " (p.5)

The story gradually builds up the tension between the two men. At first Samuel is sympathetic, the man is afraid when the supply boat comes and Samuel hides him, but later he feels threatened as the man tells him something he cannot understand but with a finger across the throat gesture that seems unambiguous. His feelings of weakness and impotence are made worse by memories of his youth when he participated in an unsuccessful protest and was unable to kill a soldier in a fight. He feels the security of his life on the island is threatened, he thinks the man wants to take it all from him, he is old and fears he can do nothing to prevent it. Things are bought to a head when another body washes up. I liked this quote, it is as if the island has become a microcosm for his country, that he is trying to protect, the man becomes like the Dictator in his mind. The trauma he has experienced is both personal and national, but all he has left in his life now is the island:

"It seemed a hundred years since he had last been here. A century within which he had trebled, quadrupled in age. He was older now, very old; older than any man had ever been. His body was in pain, as were his bones. His mind hurt to think of anything other than home and bed. He could capture nothing, everything had become intangible, a dream. There was no man on the island. There was no one but himself. He was alone.
He caught hold of the man again in his mind, forced himself to remember him. The threat of him. Would he be able to avoid death for a fortnight, keep alive until the supply boat returned, then flee to the jetty, beg to be let on board, hurrying them to start the motor, to go, to make haste? The island, the tower, the cottage, the wall, and his vegetables. All of it would be left behind, to be taken over and ruled by this other man. The smotherweed would be allowed to grow wild. It would cover the buildings, the garden, the land. The stone perimeter would collapse as the sea moved in, carving away the island, making away with it, until nothing remained.
He could not allow that to happen. He would not give up his land; he would not leave; he would never leave. The land was his always." (p.146)

An excellent read, thoroughly absorbing, and frightening, and troubling, so yes, I had a lot of reactions to it.