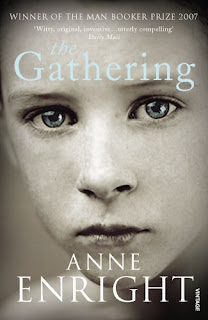 The Gathering by Anne Enright was the Booker Prize winner in 2007. I picked it up slightly at random in the library and then persuaded my little book group that it would make an interesting read. The reviews on the back include the words 'eloquent and powerful', 'tender and subtle', 'dark and lyrical', and I think I would have to agree with all of them. This has been probably the most beautifully written book I have read in some time. It almost leaves me not knowing where to start because there is so much to say.

Veronica (an ugly name, and she agrees) appears to be the only one of her many, many siblings who still lives near her family home. This is probably why she ends up taking responsibility for arranging her brother's funeral. I think that her physical proximity is quite telling. She is the one who can't seem to escape from the past, is haunted by half remembered memories and struggles to make sense of her family's tangled history, most especially that of her grandmother Ada. So, her brother Liam is dead, suicide by drowning, at Brighton, and it is Veronica who bears the brunt of this event, dealing with the practicalities but failing to cope with the loss. As her brothers and sisters gather from their disparate lives and converge on the house their elderly mother still occupies, Veronica tells us the background of her relationship with Liam, and the deeper history of Ada and Charlie and the strangely ever-present Lamb Nugent.

So she rambles through her life story, intermittently inventing the story about her grandparents, part of her attempt to get to grips with all the unspoken parts. The only person left to ask is her mother, and she doesn't want to talk. She and her brother were only eleven months apart in age and as such shared their childhood experiences very closely, but she knows once they get away to university together that Liam is headed down a road that she does not want to follow. So she marries and has two daughters, and supports her husband as he struggles to establish his own business, but is left feeling somewhat peripheral to her own existence. The book is as much about Veronica's life as about Liam's death, and the breakdown of her marriage. Liam's death exacerbates her sense that she let him down, and in telling her story she is trying to understand what went wrong, and in the telling to make amends.

I am going to just string some quotes together, which I jotted down as I read, that captured for me something about the family, their relationships, and the absolute beauty of the writing:

Veronica's reaction to her mother's initial grief:
"She would cry the same for Ivor, less for Mossie, more for Ernest, and inconsolably, as we all would, for the lovely Jem. She would cry no matter what son he was. It occurs to me that we have got something wrong here, because I am the one who has lost something that can not be replaced. She has plenty more."

Leaving to go to Brighton to collect Liam's body:
"There is something wonderful about death, how everything shuts down, and all the ways you thought you were vital are not even vaguely important."

Describing her husband Tom:
"He is very clear sighted about the world, and yet he questions himself, constantly. He pushes himself hard, and is rarely satisfied. He is completely selfish, in other words, but in the poshest possible way. I look at him, a big, sexy streak of misery, with his face stuck in a glass of obscure Scotch, as he traces the watermark of failure that runs through his life, that is there on every page."

After Ada's funeral, the instruction to 'take what you like' the girls fight over her trinkets:
"Kitty always needed things more than you did, Bea always deserved them more, while poor Midge - well, Midge always refused everything until she was persuaded to grab the lot. So I left the house with a howl of regret for all that I had been denied, though there was nothing there I actually wanted .... I did not know how to want what she left behind, I wanted out of there, that was all. I wanted a larger life."

Thinking of Ada, doing the dishes:
"I think of her when I do the dishes. Of course I have a dishwasher, so if I ever have to cry, it is not into the sink, quietly like Ada. The sink was her place for this. Facing out of the back of the house, something about the endless potatoes that needed peeling, or the paltriness of the yard, but, like all women maybe, Ada occasionally had a little sniffle and then plink, plink, a few tears would hit the water in the sink. Like all women Ada would have to wipe her nose on her forearm because her hands were wet."

She and Kitty revisit the site the cemetery of the mental hospital, an unexplained trip taken with Ada during their time with her:
"There are no markers, no separate graves. I wonder how many people were slung into the dirt in this field and realise, too late, that the place is boiling with corpses, the ground is knit out of their tangled bones.
I look back, helpless at Kitty in the front seat of the car.
They have me by the thighs. I am gripped at the thighs by whatever feeling this is. A vague wind. It clutches at me, skitters between my clothes and my skin. It lifts every hair. It grazes my lip and is gone."

The feeling that she can now look back and understand something about Liam that was beyond her when they were children:
"Now I know that the look in Liam's eye was the look of someone who knows they are alone. Because the world will never know what has happened to you, and what you carry around as a result of it. Even you sister - your saviour in a way, the girl who stands in the light of the hall - even she does not hold or remember the ting she saw. Because, by that stage, I think I had forgotten it entirely."

At the wake, with all the siblings gathered to keep company with Liam's body:
"Here it comes. Ita has been drinking so long she has been made sober by it, and slow, and violent. She has some terrible revelation to make and I wonder what it will be. You never told me I was beautiful. Or something worse: You stole my best hairband in 1973 (I did actually). Family sins and family wounds, the endless pricking of something we find hard to name. None of it important, just the usual, You ruined my life, or What about me? because with the Hegartys a declaration of unhappiness is always a declaration of blame."

I have not read much 'Irish' writing, possibly because I find catholicism a bit tedious, and basically I think Irish writers cannot escape having a catholic thread running through whatever they write, it is so pervasive in the culture. (Am happy to be corrected here with good suggestions for Irish authors.) I think I didn't mind the catholic aspect because it was not 'religious' in this book. There was not really any talk of God or anything, it was more to do with the whole guilt thing, and the way it affects attitudes to sex in particular. The story is mostly about family bonds, how we try and escape them, but how they make us what we are. Anne Enright creates such wonderful atmosphere for all the different eras she evokes, from the 20's through to the present day, reflecting on both the changes of history and the immutable aspects of life and relationships. But it is a book mostly about grief, and it is good because you grieve along with Veronica, for her blue eyed brother, and the promise of a life wasted.
Posted by martine at 17:18