Work Perk of the Week: THE Election 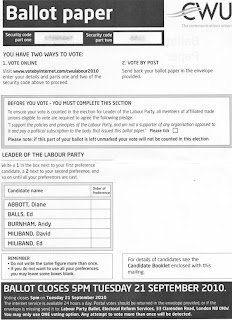 So I opened a mailing from the Communication Workers Union when I came home from work today and found the smiling face of Ed Balls, who's candidature for the Labour Party leadership election they are sponsoring, causing me to recoil in horror and seriously debate leaving the union. However on looking further I discovered to my delight that it also contained a ballot paper for said election. So I get to have my own little influence on the potential future leader of the country. I found it very interesting, and somewhat hypocritical (and therefore not necessarily unexpected, they are politicians after all), that the Labour Party uses a Single Transferable Vote system for the election of it's leaders, something that they are not prepared to accept for the election of members of our parliament.
.
.
.
Ten minutes later I have read the ballot paper more closely, and it asks me to tick a box to indicate that "I support the policies and principles of the Labour Party, and am not a supporter of any organisation opposed to it and pay a political subscription to the body that issued this ballot paper."
Suddenly it has got a whole lot more complicated, so I had to go looking for these 'principles' that they want me to support. So Dunk found the 'Rule Book' which contains these words of wisdom on the values of the Labour Party:

1 The Labour Party is a democratic socialist party. It believes that by the strength of our common endeavour we achieve more than we achieve alone, so as to create for each of us the means to realise our true potential and for all of us a community in which power, wealth and opportunity are in the hands of the many not the few; where the rights we enjoy reflect the duties we owe and where we live together freely, in a spirit of solidarity, tolerance and respect.

2 To these ends we work for:

(a) a dynamic economy, serving the public interest, in which the enterprise of the market and the rigour of competition are joined with the forces of partnership and co-operation to produce the wealth the nation needs and the opportunity for all to work and prosper with a thriving private sector and high-quality public services where those undertakings essential to the common good are either owned by the public or accountable to them

(b) a just society, which judges its strength by the condition of the weak as much as the strong, provides security against fear, and justice at work; which nurtures families, promotes equality of opportunity, and delivers people from the tyranny of poverty, prejudice and the abuse of power

(c) an open democracy, in which government is held to account by the people, decisions are taken as far as practicable by the communities they affect and where fundamental human rights are guaranteed

(d) a healthy environment, which we protect, enhance and hold in trust for future generations.

3 Labour is committed to the defence and security of the British people and to co-operating in European institutions, the United Nations, the Commonwealth and other international bodies to secure peace, freedom, democracy, economic security and environmental protection for all.

4 Labour shall work in pursuit of these aims with trade unions and co-operative societies and also with voluntary organisations, consumer groups and other representative bodies.

5 On the basis of these principles, Labour seeks the trust of the people to govern.

My feeling is that it is vague enough with nothing objectionable or outside my own political attitudes, and they are not asking for a lifelong commitment to voting Labour, but something still troubles my political conscience ... so ... I will give it some more thought ... and take opinions on the subject in the comments box ... What would you do?
Posted by martine at 18:42