This has become my very traditional bank holiday pastime (you can pop back to 2009 and 2010 to see what I was getting up to, although breaking with tradition it is only easter, I may be going up to Newcastle on the May bank holiday).
The first project started yesterday was inspired by dad's jumper (still a secret jumper) which has cables, and wanting to try something a bit more 3D. So I made some purple dreadlocks, surprisingly quick and easy with the assistance of the bamboo mats, though carefully still only part felted: 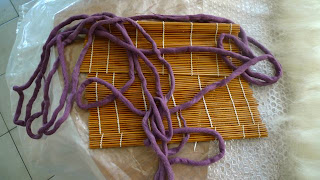 and laid them out as if they were, admittedly very random, knitted cables, on to a piece of white pre-felt. This was then re-wetted and rolled for quite some time to ensure that they felted in place to the background. 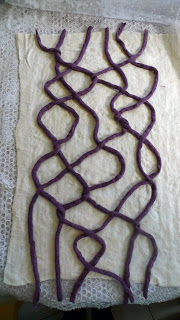 You don't get a very good impression from the picture but I did end up with quite a nice effect, though then I wished I had made the layout more regular. 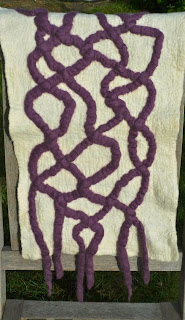 Then I made a piece of black pre-felt that I left to dry overnight. This morning I sat and embroidered it with wool yarn, some bits of left over homespun and some bits of sock yarn, then rewet and rolled it very vigorously around the rolling pin and then in the bamboo mat (when it had shrunk down some). 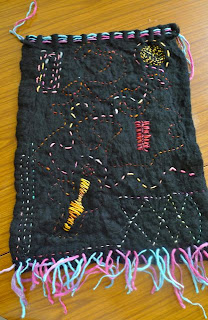 Again it was just a bit of experimentation and the yarns did not blend as well as I hoped, considering I was sure the homespun would felt, and the red one, which I have used for a hat which I knitted and then machine felted when it turned out too loose. A pleasing overall effect though, and I liked the way that the tassels on the bottom edge felted up all crinkly. 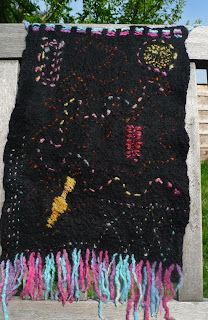 And this is my current knitting project. It is called 'Rainbow' from the Kasbah Collection (pictured on the front of the book here) by Rowan (linking to the Rowan website, which does have some lovely free patterns, but not this one). It is knit in Summer Tweed which is a silk and cotton mix, terrible to knit with because it has quite a rough texture, but the colours are wonderfully vibrant. I am knitting it in one piece on the circular needles to save the sewing up so am having to adapt the pattern as I go along. 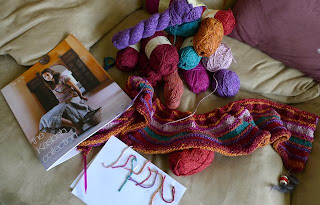