A Letter to D 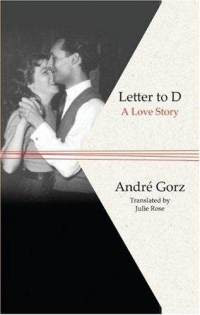 A Letter to D by André Gorz.
M and I were browsing the history section at the library on Monday. We had been discussing Nazism on our way there and she said she wanted to know more about WWII. She didn't find anything that caught her interest but I spotted this, for some reason classified by the dewey decimal system under 'General history of Europe: France'.
André Gorz was an existentialist philosopher but I knew his name for his interest and involvement in the environmental movement and green politics, his book 'Ecology as Politics' used to sit on my bookshelf. I learn from the Wiki page that he also worked with Ivan Illich which endears him to me even more. This book takes the form of an open letter to his terminally ill wife, reminding her and himself of the history of their love affair, and as an overt apology for what he had written about her in a previous book that he had come to feel misrepresented both her and their relationship. It tells of their humble beginnings a few years after the war and how she supported him in his work and writing, their commitment to shared political ideals and a life together that spanned nearly 60 years.
I'm not sure this book will be picked up by many but it was quite a singular unique read. It is partly a history of the political left through the latter part of the 20th century told by one of it's most significant protagonists, but at the same time it revolves around Dorine, who, in spite of his adoration and admiration of her, even in this tale, remains a slightly enigmatic figure. Although very politically active, something that was central to their lives and relationship, she does not seem to have written anything herself, having devoted herself to the support of her husband.
"Ecology became a way of life and a daily practice for us, although that did not stop us from feeling that what was needed was a completely different civilisation. I'd reached the age where you ask yourself what you've done with your life, what you would have liked to have done with it. I had the impression of not having lived my life, of having always observed it at a distance, of having developed only one side of myself and being poor as a person. You were, and always have been, richer than I was. You'd blossomed and grown in every dimension. You were at one with your life; whereas I'd always been in a hurry to move on to the next task, as though our life would only really begin later." (p.101)
The book becomes his way of telling her that her existence was what allowed him to be the man, and the writer that he became. It is autobiographical in style, very straightforward, but all the more intimate for the lack of pretension with which he writes. While quite self-analytical and self-critical in places it never slides into sentimentality. The notes for the reader at the end contains a cast list of all the important figures in 20th century radical politics. A fascinating portrait of him and of their relationship, moving and poignant, and if you have a couple of hours to spare on a quiet afternoon you would certainly feel it was hours well spent.
"You've just turned 82. You're still beautiful, graceful and desirable. We've lived together now for 58 years and I love you more than ever. Lately I've fallen in love with you all over again and I once more feel a gnawing emptiness inside that can only be filled when your body is pressed against mine." (p.105) 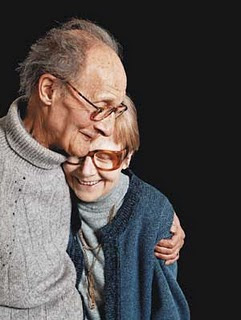