Several years ago I knitted this lovely blanket for cuddling up with on the sofa on chilly evenings. It is made with recycled sari yarn and banana yarn (also known as vegan silk because it has a soft silky sheen but is, as the name suggests, made from banana fibre). It is not all that soft so it is backed with a cheap fleece throw to make it more cosy. In a fit of generosity I gave it to Tish when she went off to uni. 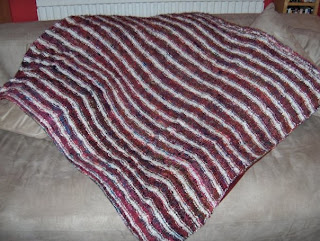 So I bought a batch of yarn last summer to make a start on a replacement, most of which has now been used, so the other day I bought another selection of beautiful yarns, mainly Araucania and Mirasol, all from Aileen's Wool Shop on eBay. By the time it is finished I will have spent a small fortune on it ... but what the hell:-)

I have moved over to crochet in the interests of speed and am kind of winging it, vaguely using a log cabin patchwork pattern. I learned how to do a half double crochet and am just doing that (except when the yarn is nearly running out, then I do a row of single crochet.) I have also raided the stash and found some left over balls from other projects that are suitable. Currently I have 8 large squares, if I do 16, plus joining, plus an edging, it should be about the size of a double quilt. 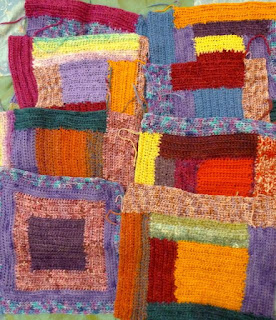