Something to scream about 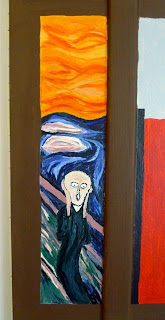 On reflection his expression is less a scream of existential angst and more one of "oh, my god, what have you done!" We had been told by the estate agent when we took the place that it was fine to decorate and I said to the landlord the first time he came around that I would not do anything outlandish ... so I guess he's not going to be inspecting the whole house again until we are ready to move out and I have meticulously and regretfully painted over the whole thing.


So our bedroom had these very tedious and nondescript built-in cupboards, with false panels created by some cheap wooden battens. They are pretty good storage allowing me to hide all the crap that used to be in the loft in the old house. I had been mulling over some kind of decoration for a while. Then I saw some pictures online of bookcase murals (for people who don't have enough real books) and rather took to the idea.


So here they are in their original incarnation: 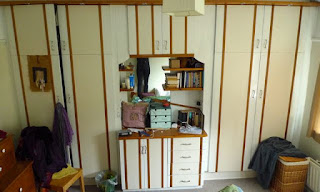 I painted an undercoat of white over the battening (They are in the wrong position to use as a framework. I debated removing it but it would have made a mess of the surface and made more work, so I am ignoring them): 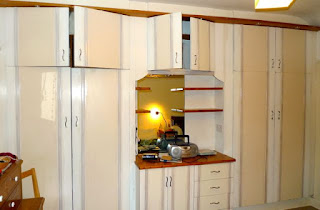 Then added a framework of shelving (the broken one was Creature's idea) The section where the drawers are may become an aquarium or some such: 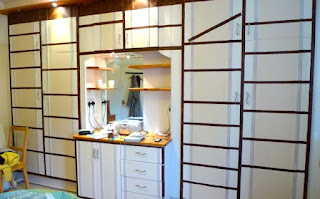 The first shelf looked a bit like this. Books would float at random because it was hard to paint ones next to each other without touching and smudging: 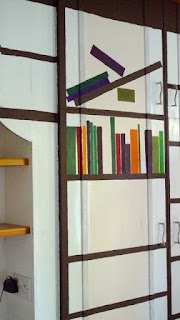 It is going to be a long term project but after several weeks of work (not constant, just Sundays and a few days off and odd afternoons) there has been considerable progress: 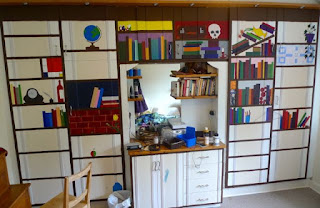 Today I have been working on this section. Tish did the wine bottle weeks ago; I added the clock, ink pot and random books. The Mondrian was done earlier this week. Don't look too closely or you will see how amateurish and wobbly my painting is. I am sticking to simple ideas that can be copied from pictures: 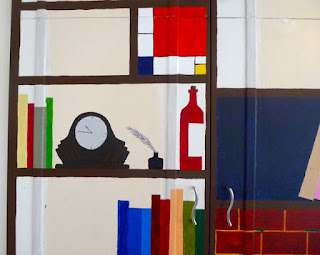 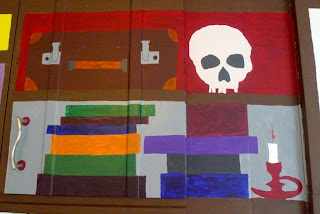 The broken shelf, and, amusingly, if it was not broken there would not be space for the things on it to stand upright. I didn't think of that until after I painted the vase but now I quite like the idea: 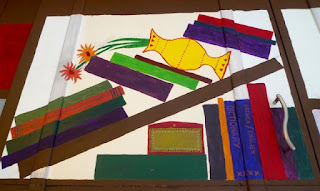 Potion bottles on the top shelf painted by Creature: 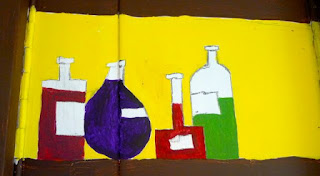 And the globe, that I am most proud of: 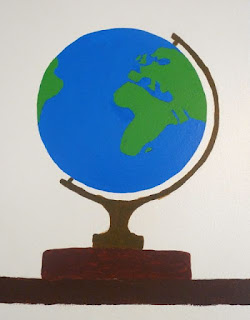 So, as you can see there is still quite a way to go. Sometimes if I don't have any particular inspiration I just come and do some touching up of all the smudgy, wobbly bits (I did get a bit better when I bought some decent brushes.) If anyone has any suggestions for oddities to add to a shelf please feel free ... just painting books is very uninteresting so I am trying to mix it up. The books will all have titles in the end though at the moment those kind of details are being neglected.
Posted by martine at 17:24