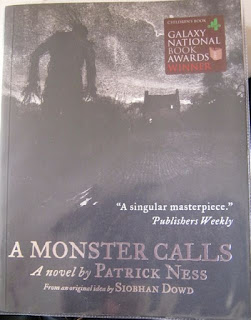 I read about Patrick Ness' book 'A Monster Calls' and the review gushed so enthusiastically that I added it to my library request list. It is written after an idea from the author Siobhan Dowd who died before she was able to complete the book. It is about a boy coming to terms with his mother's terminal illness. Chapters alternate between Connor's real world of hospital visits and school bullies, and the nightmares where he is visited by a monstrous yew tree who helps him face the emotional turmoil and suppressed anger he is experiencing. While on the face of it that sounds a little simplistic and almost patronising it is so well written that it never comes across like that.

The book is really made however by the illustrations of Jim Kay which are dark and atmospheric and really emphasise the fear and loneliness that Connor is feeling.

Here is the monster the first night it arrives in Connor's garden: 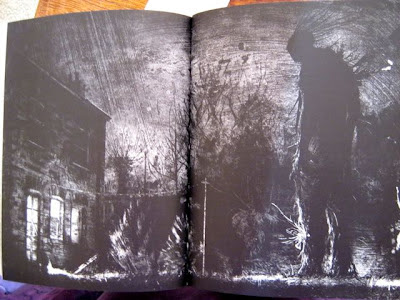 And when it arrives again in his grandmother's 'best' front room: 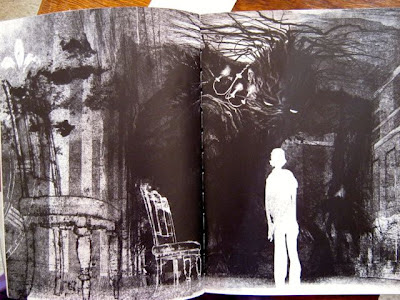 But my favourite is the image of the tiny tree sprouting from the knot in the floorboards after the monster's departure: 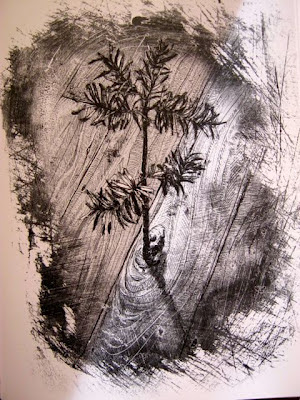 A wonderful book, tackling a difficult subject very effectively; not just a story for children going through the loss of a parent or other family trauma, but a genuinely helpful book about expressing negative emotions. Probably suitable 8+ but I think a parent might want to read it themselves first to judge how their own child might respond to the ideas and images in the story.

(Linking back to my review of Michael Rosen's Sad Book, that also tackles the subject of death but aimed at much younger children.)
Posted by martine at 21:28