Wuthering Heights and all that 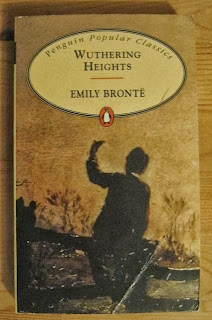 October is nearly over, the Read-a-thon has come and gone, the Literature Festival has come and gone, and NaNoWriMo is nearly upon us. I went to a lot of interesting events during the literature festival but Catherine O'Flynn's event at Waterstones on Saturday was my favourite; I reviewed her first novel 'What Was Lost' back in 2009 and treated myself to a signed copy of her new book 'Mr Lynch's Holiday'. She was a lovely unassuming woman who made you feel that ordinary people are capable of good writing and you don't have to be some kind of driven 'creative' type to make a living at it.

I didn't strictly finish 'Wuthering Heights' during the read-a-thon, I read the last few pages after I got back from an afternoon festival event. I am not sure what to write about a book that has no doubt been analysed to death. It was not what I expected, though I don't know what I did expect. It was gripping in the way that only really nasty characters can make a book; it was following a litany of people who's only pleasure in life was the manipulation and control of others. I did like the way that the tale is related by a servant, so you get a very particular view of the characters, because of course she was close and intimate with their lives in some ways and yet kept at a remove in others. Because of course it is partly about social boundaries, like the one that divided Cathy and Heathcliff, although I felt it was less a commentary on the position of women than Austen manages. I liked it much better than Jane Austen because the emotions are more real and there is less of the tedious formal politeness that blights the lives in Pride and Prejudice. I pulled out this one quote, just because it encapsulated for me the whole thing about their relationship. I definitely did not find Heathcliff very loveable or romantic but it helps you appreciate what he meant to Cathy:

"I cannot express it; but surely you and everybody have a notion that there is or should be an existence of yours beyond you. What were the use of my creation, if I were entirely contained here? My great miseries in this world have been Heathcliff's miseries, and I have watched and felt each from the beginning: my great thought in living is himself. If all else perished, and he remained, I should still continue to be; and if all else remained, and he were annihilated, the universe would turn to a mighty stranger: I should not seem part of it. My love for Linton is like the foliage in the woods: time will change it, I'm well aware, as winter changes the trees. My love for Heathcliff resembles the eternal rocks beneath: a source of little visible delight, but necessary." (p.81) 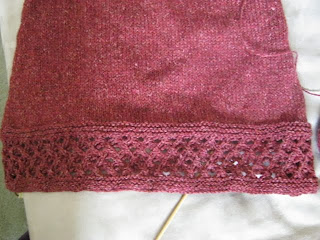 I have been doing various bits and pieces. This is a pattern called Corinna which I have been working on for a while out of some lambswool/silk from Kingcraig fabrics. It is sort of a replacement for my lovely yellow cable jumper that I managed to shrink just very slightly, enough to make it less of a pleasure to wear ... such is life.

And here is the cowl I knitted with some homespun yarn for my sister Claire's birthday, knit to this nice simple pattern. I was a bit iffy about the whole idea of a cowl but I really liked it once I had made it so might very well do another for myself; all the benefits of a scarf but none of the bother of the dangly bits getting in the way. 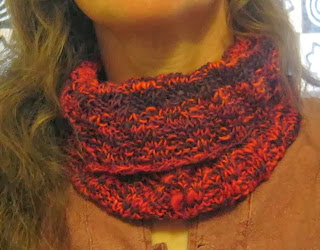 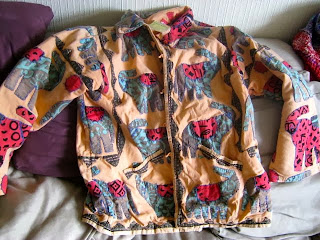 When we were at HESFES I bought this quilted jacket. The peachy colour did not really appeal so I transformed it with a dark red dye: 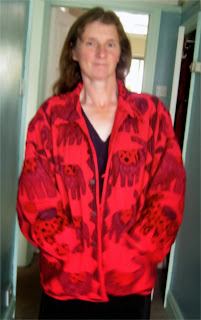 And finally just a quickie of Creature's birthday cake; she didn't want to be photographed with it as usual, but Tish and I were quite proud of our efforts here. 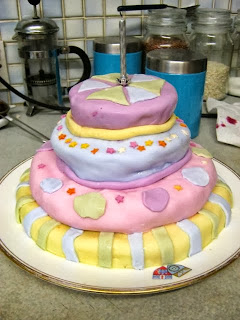