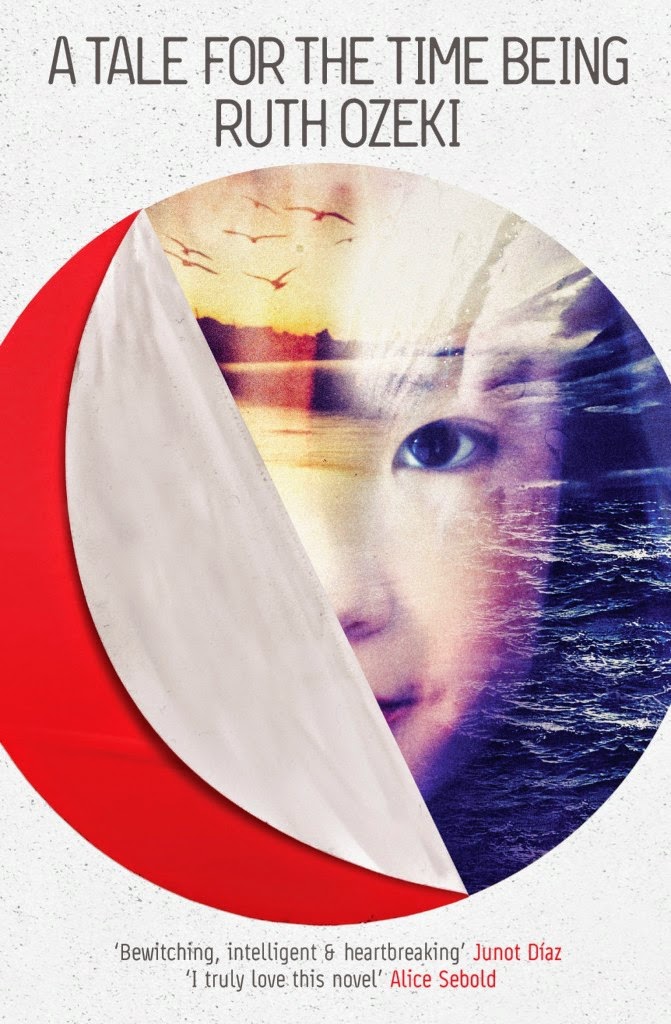 "For the time being,
Words scatter ...
Are they fallen leaves?
I'm not very good at poetry, but when I read old Jiko's  poem, I saw an image in my mind of this big old  ginkgo tree in the grounds of her temple. The leaves are shaped like little green fans, and in the autumn they turn bright yellow and fall off and cover the ground, painting everything pure golden. And it occurred to me that the big old tree is a time being, and Jiko is a time being, too, and I could imagine myself searching for lost time under the tree, sifting through the golden leaves that are her scattered golden words." (p.24)

'A Tale for the Time Being' by Ruth Ozeki. Oh I so enjoyed this book. I love books that tell several stories at once, and in this one we have the story of Ruth and Oliver and a cat named Schrödinger who live in an obscure and isolated little corner of Canada, and Nao, a young Japanese girl suffering the traditional trials of adolescence, and her great-grandmother Jiko who is a buddhist nun. Also her great-uncle Haruki#1, who was a kamikaze pilot. On the beach near her home Ruth finds a plastic bag containing a diary and letters, that she believes has been washed across the Pacific following the earthquake and tsunami in Japan in 2011, and she begins to read about Nao's life and becomes increasingly curious about her story and her family. Nao's father is very depressed and keeps trying to kill himself. Having recently returned to Japan from a childhood in America Nao is tormented by her classmates as an incomer, a situation that goes from bad to worse and drives her to the point of equal despair. And then she spends the summer with her great-grandmother.

This book has so much going on, so many themes and ideas. First the idea of time, and how people exist within time and how the passage of time affects us, how our experience of time is not a constant thing. She plays with the kind of language that we use when talking about time and deliberately confuses Ruth (the character), who becomes convinced that what she is reading in the diary is happening in real time.

"Time interacts with attention in funny ways.
At one extreme, when Ruth was gripped by the compulsive mania and hyper focus of an Internet search, the hours seemed to aggregate and swell like a wave, swallowing huge chinks of her day.
At the other extreme, when her attention was disengaged and fractured, she experienced time at its most granular, wherein moments hung around like particles, diffused and suspended in standing water." (p.91)

"Old Jiko's past is very far away, but even if the past happened not so long ago, like my own happy life in Sunnyvale, it's still hard to write about. That happy life seems realer than my real life now, but at the same time it's like a memory belonging to a totally different Nao Yasutani. Maybe that Nao of the past never really existed, except in the imagination of this Nao of the present, sitting here in a French maid café in Akiba Electricity Town. Or maybe it's the other way around." (p.97)

Then I was learning a great deal about Japan, a culture of which I am pretty much entirely ignorant. There are bits of conversation in Japanese with translations, which often serve to point out how hard it is to understand another language when they have an entirely different way of expressing ideas.

" 'Maa, so kashira,' she said, which is one of those Japanese answers that means absolutely nothing." (p.208)

There is a lot of discussion around the subject of suicide, historically the idea of ritual suicide and about how Japanese society views suicide very differently from the West, but also relating to her father, Haruki#2, and also to Haruki#1, her great-uncle, who talks through his letters and secret diary about the experience of being conscripted to be a kamikaze pilot. Letter from Haruki#1 January 1944:

"When I learned our student exemptions were terminated, I knew I would die, and I was overcome with an emotion akin to relief upon hearing the news. Finally, after these long months of waiting and not knowing, to be certain even if it was the certainty of death, felt exhilarating! the way ahead was clear, and I could stop worrying about all the silly metaphysical business of life - identity, society, individualism, totalitarianism, human will - that in university had so preoccupied and clouded my mind. In the face of certain death all those notions seemed trivial, indeed." (p.251-2)

And also simply the subtitles of how different cultures are, here a conversation between Haruki#2 and Professor Leistiko:


I am assuming it is not a coincidence that the character is named 'Nao'. She is such an interesting young woman, because she is utterly a teenager, with teenage concerns and interests, but we also watch her struggling to make sense of the world and her place in it:

"You have to get the timing just right, and even though I was scared to make a mistake in front of all those people, I think I did a pretty good job. I really like drumming. While I'm doing it, I am aware of the sixty-five moments that Jiko says are in the snap of a finger. I'm serious. When you're beating a drum, you can hear when the BOOM comes the teeniest bit too late or the teeniest bit too early, because your whole attention is focussed on the razor edge between silence and noise. Finally I achieved my goal and resolved my childhood obsession with now because that's what a drum does. When you beat a drum, you create NOW, when silence becomes a sound so enormous and alive it feels like you're breathing in the clouds and the sky, and your heart is the rain and thunder.
Jiko says that this is an example of the time being. Sound and no-sound. Thunder and silence." (p.238)

As usual too much going on for me to be able to explain why it was such a great book. Alongside the main story we have Nao's increasing curiosity about the girls who work the bar, life at the temple with Jiko, all the wonderful quirky characters in the community where Ruth an Oliver live, the vulnerability they experience by being so remote and the slightly strange subplot of the disappearing cat. This has been waiting to be posted since last week so I am just going to finish now. A wonderful book, definitely add it to your list.