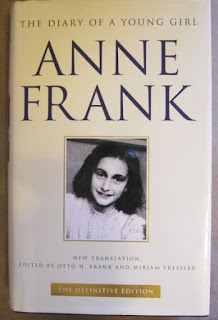 I find myself at a loss to explain how important our final evening in Amsterdam was to me. I first read Anne Frank's diary when I was about eleven or twelve so I feel like I have been waiting forty years to go and see the 'house behind'. I read the book again twenty years ago when the definitive edition was published, and then again a few weeks ago before our trip. I am distraught that I cannot find my original copy when I still have a shelf of other books from my teenage years.

The book endures because it is so well written and so intelligent. It is not the diary of a child, recounting events and complaining about the food, it is her inner life, her thoughts and feelings and is reflective of her own thinking and behaviour. Her growing up was not put on hold by the terrifying situation they found themselves in, it carries on regardless, and her writing became an outlet for everything she was going through. The things she writes about the other people are not merely factual but gives us insight into their characters too, and her descriptions of life and the atmosphere in the secret annex are mature and perceptive beyond her years. I don't often think of a particular book that everyone should read it, but if it is true of any book then it is true of this one. Her diary makes Anne a real person in ways it is hard to explain; no, there is no museum for any of the other people who's names appear in the deportation list with Anne's, but her diary ensures we are reminded that they too were all human beings with lives, loves and hopes for the future, her humanity reminds us of theirs and helps diminish the anonymity that accompanies numbers like six million.

Here from Saturday 7th November 1942:
"It's different with Father. When I see him being partial to Margot, approving Margot's every action, praising her, hugging her, I feel a gnawing ache inside, because I'm mad about him. I model myself on Father, and there's no one in the world I love more. He doesn't realise that he treats Margot differently from me: Margot just happens to be the cleverest, the kindest, the prettiest and the best. But I have a right to be taken seriously too. I've always been the clown and the mischief-maker of the family; I've always had to pay double for my sins: once with scolding and then again with my own sense of despair. I'm no longer satisfied with the meaningless affection or the supposedly serious talks. I long for something from Father that he's incapable of giving. I'm not jealous of Margot; I never have been. I'm not envious of her brains or her beauty. It's just that I'd like to feel that Father really loves me, not because I'm his child, but because I'm me, Anne." (p.62-3)

This from August 1943, under the title 'A daily chore in our little community: peeling potatoes!':
"We go on peeling. I glance at Dussel out of the corner of my eye. Lost in thought, he shakes his head (over me, no doubt), but says no more.
I keep peeling. Then I look at Father, on the other side of me. To Father, peeling potatoes is not a chore, but precision work. When he reads, he has a deep wrinkle in back of his head. But when he's preparing potatoes, beans or vegetables, he seems to be totally absorbed  in his task. He puts on his potato-peeling face, and when it's set in that particular way, it would be impossible for him to turn out anything less than a perfectly peeled potato." (p.130-1)

From a long entry Saturday 15th July 1944; it feels amazing that Anne continues to feel hope in the face of what they have been through:
"It's difficult in times like these: ideals, dreams and cherished hopes rise within us, only to be crushed by grim reality. It's a wonder I haven't abandoned all my ideals, they seem absurd and impractical. Yet I cling to them because I still believe, in spite of everything, that people are truly good at heart.
It's utterly impossible for me to build my life on a foundation of chaos, suffering and death. I see the world being slowly transformed into a wilderness, I hear the approaching thunder that, one day, will destroy us too, I feel the suffering of millions. And yet, when I look up at the sky, I somehow feel that everything will change for the better, that this cruelty too will end, that peace and tranquility will return once more. In the meantime, I just hold on to my ideals. Perhaps the day will come when I'll be able to realise them!

The Anne Frank Huis has had a long journey from the empty shell it was when Otto Frank returned to Amsterdam in 1945. In the 1950s it was nearly demolished but money was raised and the building was saved, and along with the one next door, became a museum and International Youth Centre. Over the following decades it was restored and renovated. The museum, I felt, struck exactly the right balance between being about Anne and being about the Holocaust. The rooms in the annex are quite separate from the museum with it's displays and audio guide; they are simply empty and subdued. Despite the steady flow of people through the space it had an atmosphere of quiet respect. I was glad that they chose not to 'reconstruct' the rooms as they were. It reminds you that the people are gone. It is not some kind of quaint 'how people lived in the olden days' space. It was a hiding place, a refuge from almost certain death, a suspension of life for the inhabitants. 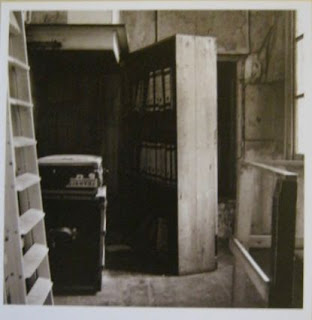 The annex was stripped bare after the arrest of the occupants, all that remained, and are displayed in the rooms, are a few books, a corrected piece of Margot's 'homework' and a shopping list. The pictures that Anne had stuck to her bedroom wall have been restored and returned to their original position. I cannot find a picture of the girls' height markings on another piece of preserved wallpaper, that show Anne grew 13cm during their time in hiding. It is on the wall of the Franks' room, along with a small map that Otto was using to track the progress of the Allied invasion. It is these tiny details that make these rooms so meaningful. You are not visiting to see how they lived, the diary tells you that, what you are asked to do is imagine their situation, their daily fear of discovery, and their fate. Our only disappointment was to find that because of ongoing building work the original of Anne's diary and other writings had been replaced with facsimiles. 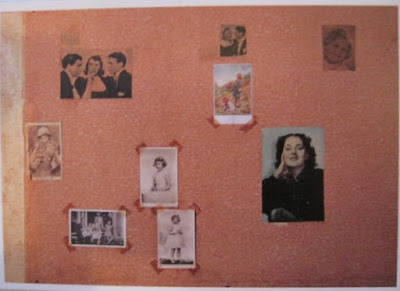 Monkey and I outside 263 Prinsengracht. 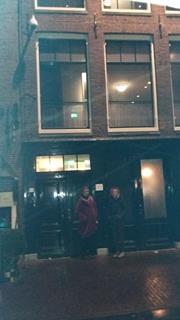 For more remote readers, you can take a virtual tour of the house at The Secret Annex Online.
This piece of film from 1941 shows Anne looking from the balcony of their apartment, it is the only known moving image of her.