Wednesday took us to the Vincent Van Gogh museum. His works are among the most recognisable and influential in the world. We waited patiently for a view of the Sunflowers, it was surrounded by a group of schoolchildren. It is worth waiting for. The gallery was busy but not crowded, I think we were glad to have avoided the height of the tourist season, it must be impossible to see anything sometimes.
As a gallery it shows how art should be exhibited. The galleries were themed and there was adequate but not excessive explanation of the artworks and artists.
A gallery of self portraits showed the progress of his style and techniques.
(These are photos of the postcards I bought, you can't take photos in the gallery.)
Other galleries gave examples of other contemporary and influential artists and discussed the impact that these relationships had on Vincent's development as an artist.
Being able to look up close and see his brushstrokes and the use of colours gave me a new appreciation for his work. I was stupidly disappointed not to find all the most famous of his paintings that are the familiar ones; Starry Night for example has been in the Museum of Modern Art in New York since 1941, but I found I was much more fascinated by the small inconspicuous paintings, like these shoes:

The Potato Eaters was quite an early work that was not well received, being considered too dark and full of mistakes, but Vincent himself was pleased with the representation of peasant life that he had achieved. It is now considered one of his most significant works. Although his paintings were exhibited he notoriously did not sell many works during his lifetime and was supported by his brother Theo who believed passionately in his art. After both their deaths Theo's wife Johanna and then his son Vincent Willem took on the task of promoting his art. His nephew was responsible for pursuing the project to build a gallery for Vincent's work, culminating in the Van Gogh Museum that opened in 1973.
The time he spent studying and painting in France and then the decline of his mental health are documented through his works. The last year of his life was an incredible prolific period. In spite of his decline it was art that he focussed on, continuing to paint while in hospital, often copying other artists work or working from his own old sketches. Vincent has become this image of a tortured artist, but I was certainly left with the impression that he was a tortured soul for whom art was his only escape. I love the way he signed his paintings simply 'Vincent'.
The museum also tells the story of his life, including examples of his extensive correspondence with his family that you can listen to. I love it when you are able to get to know the person and not just the artist. I took this photo of the display about the postal service of the time: 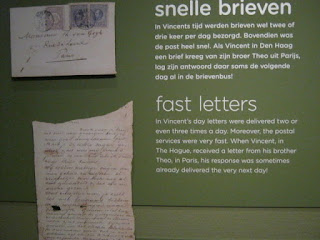 The tea towels were ridiculously expensive, so I bought cushion covers as our souvenir. 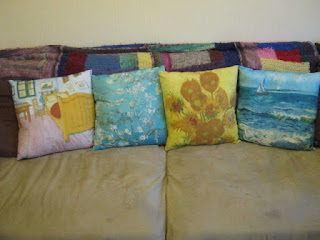