Considering it started with a Bank Holiday it has been a busy week.
Wednesday I ended up in Bishop's Cleeve having offered to spend my day off in Cheltenham office. I feel totally unfazed by doing blind deliveries now, having been dumped on a L's duty in Bourton a few weeks ago without preparation, and then going down to help out after someone had a family emergency and doing a chunk of Duty 2. So I spent the day working my way down from Woodmancote into Bishop's Cleeve via the Gloucestershire Warwickshire Railway 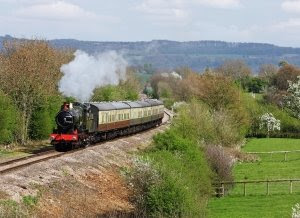 I did not even know such a thing existed and thought I was just crossing the ordinary rail line when I heard the sound of the steam engine approaching and billows of smoke came up from under the bridge. It was the only interlude in a very routine morning but kind of nice and nostalgic, being a bit of a fan of The Railway Children (but more because I like Jenny Agutter than for any mad passion for steam trains.)
This was followed by a repeat visit to Winchcombe on Friday, where I picked up three pouches and a crudely drawn street plan from the office. It turned out to be similarly straightforward, though I did have to tell one lady I had no idea if she would be getting her post but that it would most likely be pretty late. I did pause at one little front door that was right at the edge of the village, at the end of a block of some newly built social housing. It looked out so perfectly over the lush green fields that stretched away up the hillside, and I thought how lovely it is to look out of window in the morning and appreciated such a view, because we have quite a nice one at our house too.
So having done quite a chunk of overtime this week I can feel justified in buying a bit more roving. I have found this lovely seller on ebay called Forest Fibres (they have their own website too) who do wonderful merino/silk blends. I have been knitting a baby cardigan from my homespun, though worried it would not be enough I have been combining it with some undyed to make a little zig-zag pattern. It is only coming along slowly as I have too many things on the go at the mo: 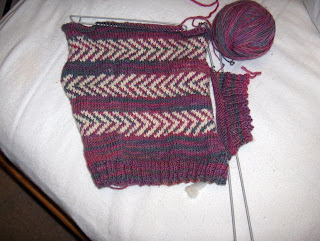 And here is the hat that I knitted from my previous batch of homespun. Tish also used some to crochet a turtle, which is going to be their mascot for their trip to Borneo: 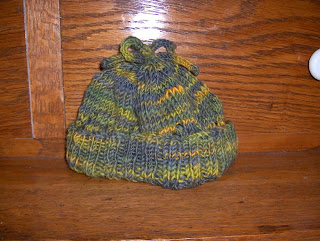