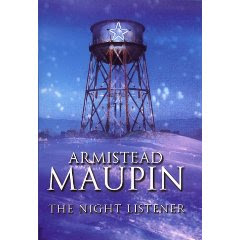 The Night Listener by Armistead Maupin. I picked this one out of the pile by my bed because the main character, Gabriel, reads his stories on a late night radio programme, and therefore it links quite neatly to my previous read, The Republic of Love, in which Tom also hosted a night-time radio show. I loved this book within the first two pages, in which Gabriel describes himself as a 'fabulist', I just loved this idea, someone who has to make things more fabulous than they really are. Unfortunately you don't get to hear any of his stories as he is suffering from writers block, a condition somewhat related to the recent departure of his partner Jess. His publisher sends him a manuscript written by a young abused boy who is dying of Aids, and he strikes up a friendship with the boy, Pete, conducted entirely over the telephone. Although Gabriel is incredible likeable and honest about himself he is also incredibly needy (when you see him with his father you get some inkling of where that comes from), and quite quickly he seems to come to rely on the closeness and support that Pete provides him with during their phone calls. It is after Jess has also spoken to both Pete and his adoptive mother, Donna, that he makes the almost offhand comment that they sound so alike they could be the same person. The comment sparks denial and then some anxiety from Gabriel, and on questioning Pete's publisher he discovers that all Pete's relationships are conducted entirely by telephone, and that no-one has met him in person. What follows is Gabriel twisting back and forth not knowing what to believe, needing the friendship so much but being afraid now to rely on it. He tracks them to their home which turns out to be a post office box address, and then Donna, in spite of turning out to be blind, catches him stalking her, and proceeds to tell him that Pete died the week before (exactly the scenario that Jess predicted), but then you are left not so sure that this is the truth either. As a reader you are left quite disconcerted, as much as Gabriel is, not knowing what to think about the Pete/Donna character. And then we have the final twist, that Jess persuades Gabriel that he should use the story as a way out of his writers block. So the final part of the story informs you that the elephant has been jewelled (see the second page for an explanation of 'The Jewelled Elephant Syndrome'). Everything that has come before has been changed to suit the author, so you have no way of knowing what is the 'real' story, and what Gabriel might have altered for literary license. It is designed to subvert your engagement with the novel, by reminding you that you are reading a novel. A thoroughly enjoyable read, highly engaging, lovely characters who have real relationships and a very cleverly written story.