"There's such a thing as too much pronunciation" 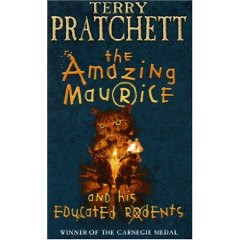 The story tapes in the car are a hang back to the fact that I did *a lot* of long distance travelling with small children. 'The Amazing Maurice and his Educated Rodents' by Terry Pratchett is really a children's book, but any time someone suggests it there are never any objections.
Maurice, and the rats, can think and talk due to eating stuff off the dump round the back of Unseen University, and with the help of a 'stupid looking kid' called Keith, they go around extorting money from towns by pretending to be a plague of rats. They end up in 'Uuuuuubervald' and meet Melissia, who thinks she inhabits a rather wild, gory fairytale. It all gets a bit out of hand and in the end Maurice gives up one of his nine lives to save Dangerous Beans (my favourite rat). (That is a very abridged version of a pretty complicated tale.) 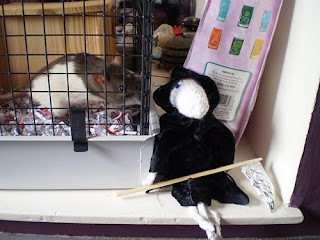 We have quite a few Terry Pratchett books. I really love his sense of humour. He is a very clever writer and I love the way the Discworld is so beautifully complete and consistent within the confines of what he has created. You can read the books in isolation (though a couple of them are continuations of previous stories) but there are characters that appear in several that draw the whole thing together. He parodies aspects of the real world in many of the stories, like 'Going Postal' (one of my favourites of course) which is a surreal take on the postal system, and in others he takes a well known story and twists it to his own ends, like Amazing Maurice which is based (very loosely) on The Pied Piper of Hamelin, or 'Weird Sisters', based on Macbeth.
So this second photo is of 'The Grim Squeaker', made by Tish (and watched over by Scarlett there I think), from a pattern on Ravelry. Death is the most consistent character in the Discworld novels. I would guess he appears in all of them (but have no idea as have not read all of them), certainly he pops up in to all the ones we have. You know immediately when it's him because he speaks in capital letters, and Tony Robinson (who does the tapes) does an excellent 'Death' voice. And since Death is there for the people, and apparently for the cats too, since he has quite a chat with Maurice about supposedly being hit by a cart, there has to be someone who comes for the rats when they die, and this is where the bone rat comes in, or 'The Grim Squeaker' as the rats choose to call him.
Anyway if you have never read anything by Terry Pratchett I would highly recommend him. You can't go too far wrong with anything that makes you laugh out loud.
Posted by martine at 08:54