I frequently spend my sundays being very lazy, blog browsing or lying in bed reading, but today, after filling in our census form, Dunk had suggested we go down and join in with a litter pick that was being organised down at Chorlton Ees by the Mersey Valley Countryside Wardens. I haven't been down there much since we moved back but it was somewhere we walked and played with the children regularly when they were young; one of Lewis' best birthday parties took place there. So we walked on down and were issued with gloves and plastic bags and sent off into the undergrowth.
I came across this plastic coat-hanger and was about to add it to the bag when I realised the little sapling, which was about 2-3 feet tall, was growing through it. 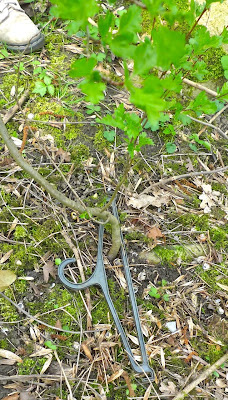 Mostly the process was a bit depressing to think of the distain with which so many people treat their environment but Dunk and I worked hard and felt very satisfied to fill seven bin bags between us. Chatting to a lady when we had finished she said they had found a safe, open and with no money, and that on a previous occasion she had found part of a pair of false teeth. I found a child's glove with little characters on the fingers that I put on the railings by the car park, and I came home with this lovely ceramic bird feeder, probably put up some years ago by the wardens but now lying empty and abandoned in the bushes. 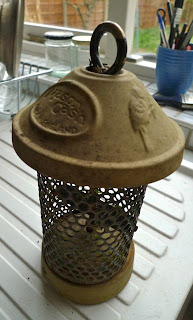