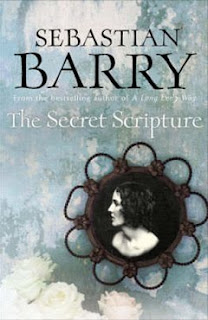 While knitting I have been listening to 'The Secret Scripture' by Sebastian Barry, which, I read on the Wikipedia page, won the James Tait Black Memorial Prize in 2008. The library has a very limited selection of books available that are Mac compatible so it was, I confess, chosen a little at random, but what an engaging book it turned out to be. Now I commented in reviewing 'The Gathering' that I did not read many irish authors so I am pleased to find that I have not clung to my prejudice. I read some of the online reviews and loved the fact that the book comes from his direct family history, he describes the inspiration coming from a comment from his mother: "We were driving through Sligo, and my mother pointed out a hut and told me that was where my great uncle's first wife had lived before being put into a lunatic asylum by the family. She knew nothing more, except that she was beautiful."

The story has two voices; Dr Grene, who is a psychiatrist overseeing the closure of an asylum, and Roseanne, one of his elderly patients, in whose story he find himself caught up. Both parties are writing their own stories, Dr Grene in the form of a diary reflecting on his life, his work and his marriage, and Roseanne, in secret, writing the tale of her early life that bought her to where she finds herself, a lifetime of exclusion and isolation for unspecified crimes. They form a bond of real friendship as, in the process of making an assessment about her future, he spends time with her and begins to learn about her background and to wonder, and then investigate, why she was committed in the first place. What is so good about the book is that both voices are strong and distinct, with such different experiences and yet bound together by this place where they have spent so much of their lives.

Roseanne is over 100 and as such her story is also partly the story of the history and politics of Ireland, taking us from the civil war through to WWII. Her family were protestants and her father may have been the victim of a political murder. Politics and religion both play an important role in the events that shape her life. The local parish priest is the only other central character, who intervenes in Roseanne's life at vital moments, usually trying to set her on a proper catholic path, and eventually taking his revenge for her rejection of his well-meaning 'assistance', appearing to have acted as judge and jury in the process of her being incarcerated. Roseanne leads a drab childhood and then, after the death of her father, ends up having to support her mentally ill mother. She marries happily, to a catholic, but of course is viewed with intense suspicion by her husband's mother and the community, but at the same time seems haunted by the loss of her father to whom she was devoted. Then she is falsely accused of adultery, abandoned, ostracised and has her marriage annulled, and is forced to live in almost total isolation. It is when she has a child that she is eventually condemned by both society and the church and is placed in the asylum. If that's not enough to send anyone mad I'm not sure what is. What I got most from her story was her sense of powerlessness, a woman to whom life just happened, with no sense of being able to make choices. You sense her immense anger and unhappiness over all the events but this is swamped by her feelings of guilt, that she was made to feel responsible for what befell her. I felt angry on her behalf, as I often find myself when I read stories like this, about women being judged and condemned as immoral, and punished by having their lives stolen. As she writes her story she is of course looking back across over half a century, so the book is also about memory, and how we create memories of things as we might have wanted them to be, as well as remembering things. Dr Grene gives us an alternate version of the events as described in a deposition by the priest, which may or may not be more literally accurate, but are still skewed by his own prejudices. Dr Grene is equally sympathetic, because he also feels as if his life has been swallowed up by the asylum. I liked him because he had obviously been rather introverted and self-interested and it is his growing relationship with Roseanne that begins to make sense of other parts of his life and quite literally makes him a better person.

Alongside these two strong characters you have the intense atmosphere of poverty, and of small town Ireland, narrow minded, inward-looking and intolerant. It was almost like reading a book in 'black and white', the sense that life did not have much colour, it was drab and an unremitting grind. But that doesn't mean it was horrible to read, it was so beautifully written. Good atmosphere is so important to place you right in the story, to take the events in their context, it draws you in and stops you feeling like an outsider, with an outsider's viewpoint. A sign of a well told tale is that you care about the protagonists, and I did. I loved the twist at the end which bought the story full circle. Though in some ways I wanted a neat happy ending it was satisfying because you felt that Roseanne had made her peace by writing her story down, and feeling that she had someone she wanted to tell it to.
Posted by martine at 19:18