Going blind in Moss Side 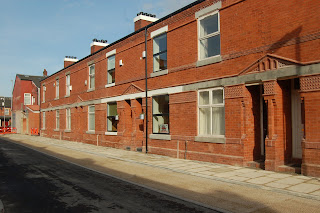 Back in January of 2009 I thought I was one tough cookie wandering the streets of Winchcombe unsupervised. Since arriving in South Manchester Delivery Office nearly nine months ago I have had a grand total of *one day* training. All the other duties I have done have been blind (five new ones in one week last month), just a process of Neil pointing me in the vague direction of the frame and leaving me to get on with it. I have developed my own process where I write out the streets in order the day before and then pop over to google maps and plug in a street name and then sit with the pink highlighter and mark out the route. I have found this to be pretty successful.

My method was confounded yesterday when I arrived expecting to do my scheduled duty and was pounced on when I walked through the door and given several options, none of which I had done before. I was given jokey warnings about not forgetting my bulletproof vest and avoiding the dead bodies but the reality of Moss Side is not so bound up with its history. I ended up on Hartington Road, and in looking for the photo I discovered that these refurbished streets are being officially 'opened' today. Admittedly yesterday only bits of the street were this tidy, most of the houses still had scaffolding and several were mere shells, but it's all progress in the right direction. I did struggle a little round the Freetown Close estate, where the developer's need to make it seem less like a council estate meant that the blocks of houses were all jumbled at angles to each other with no particular logic, but I survived the experience unscathed. What you do notice is that there are people on the streets. On School Grove I would sometimes hardly pass a soul all morning. Along Claremont Road it's quite a different matter, cars, people, activity, life; a group of young men were having a heated row on the corner of Rosebery Street, it might have been in english but I couldn't understand a word.

Things do take an awful lot longer than they might when you don't know where you're going and it was past 2 when I got back to the office. Dunk sweetened my day by fixing my puncture and walking out with the bikes to meet me.
Posted by martine at 08:56