We love sushi. I am not sure where this came from. It is expensive to eat at a sushi restaurant, especially when you have two girls who can eat their own weight in sushi. But ... it is really easy to make at home, not as complicated as it is made out, so having made our own several times I thought I would do a tutorial.  Most big supermarkets these days do 'world food' so it is not hard to get hold of the ingredients, but we popped out to Out of the Blue, the fishmonger in Chorlton, to get some tuna and they stock all the bits and pieces. Considering that a single plate of salmon or tuna maki will set you back £3 in Yo Sushi I am going to add a breakdown of how much this cost.

Start with a big bowl of sushi rice. You do need proper sushi rice as it has this particular sticky quality. Tish had got hers from a chinese supermarket where it was probably way cheaper and came in big bags. This was two and a half cups, cooked in about three and a half cups of water, 10 to 15 minutes. Allow to cool for a while then you stir in this mixture: 1 level tablespoon of salt (yes, I know it sounds a lot, trust me, I had to trust Tish) 2 tablespoons of sugar, 3 tablespoons of rice wine vinegar. This gives flavour and adds to the stickiness. This amount covered 12 sheets of nori. Cost: not sure as Tish bought the rice and vinegar with her when she moved in but probably less that £2. 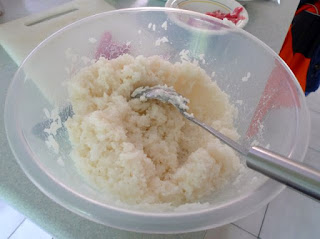 Now you need stuff to put inside.
We like a bit of crunchy so I had some finely slice cucumber, some red pepper and an avocado. Cost: about £1.50
Smoked salmon, cut into thin strips, about half a packet. Cost: £1.40
Fresh tuna, bought a tiny piece and used about half of it. Cost: £1.30
You can put in whatever you like really. Fresh salmon is also good or you can use fish sticks to make it very cheap, or just use smaller amounts of fish and more veggies. 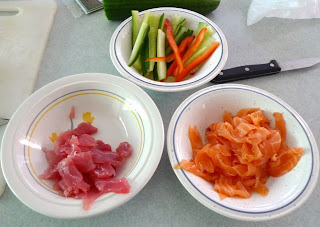 Nori, or seaweed. It's a bit like edible green paper. I bought three packets but only used just over one. Cost £1.50 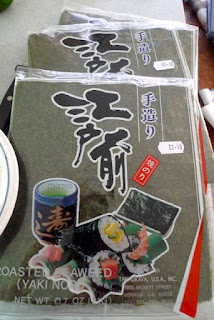 Wherever you get the food will also be able to supply you with a bamboo rolling mat. While this is not absolutely essential it does make it easier. They are a big pain to clean afterwards as the rice gets stuck between the bars. So, take a piece of nori and dollop on a big serving spoon of rice and with the back of a smaller spoon spread it out over the nori. Leave a gap at the far end for where it will close up. I try not to spread it too thick as when it is rolled and cut you need to be able to get the roll into your mouth in one go. 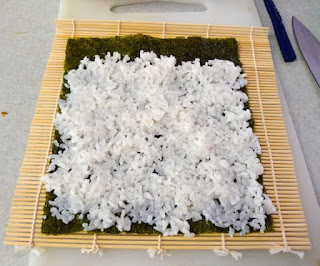 Next add a line of whatever you are putting in. I make some with just fish for Creature then a mixture of things for the rest of us. It's ok to be quite generous. 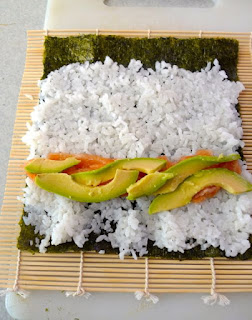 Then lift the rolling mat and fold the end of the nori over and start rolling away from you: 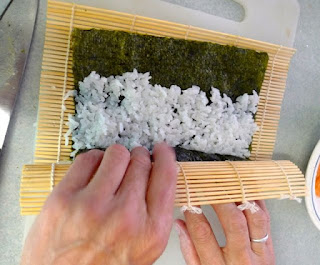 Gently roll all the way to the end using the mat to pull the roll along. Moisten the end strip of the nori with water and roll it back and forth a bit in the mat the make sure it is stuck down. 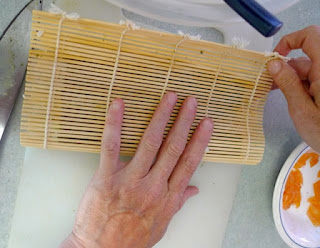 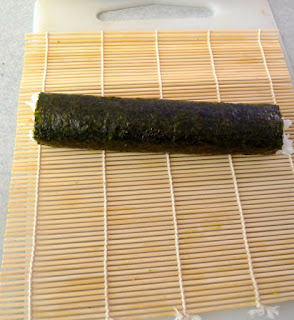 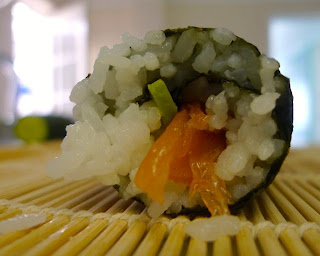 Move the mat out of the way while you chop. Make sure your knife is nice and sharp as the nori can be a bit stubborn. You will also need to wash the knife after each roll as it gets very sticky from the rice and this inhibits the chopping as well. Make them maybe about an inch thick; as I said you want them to be bite sized, but if you try to make them too thin they will probably disintegrate. If you want them to look all nice and neat and perfect you can chop the ends off very small and just eat them as you go along, but I don't tend to worry, they still taste good. 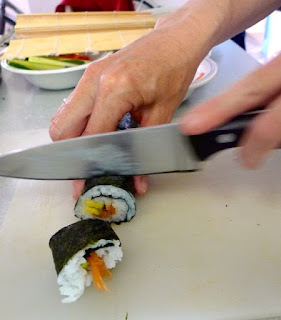 Put on a plate and keep them in the fridge while you make the rest. It probably took me about an hour to prepare the stuff and roll them all up. 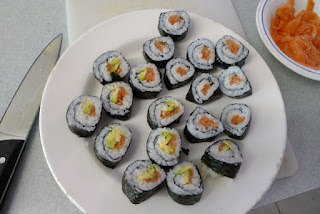 This is our dinner table, adorned with the soy sauce and pickled ginger. I am not convinced about the wasabi but you can either use as a condiment or put some inside the sushi rolls. Tish, Creature and myself tackled this lot until we were stuffed and there were maybe ten left. Total cost (if you include the jar of ginger): less than £10 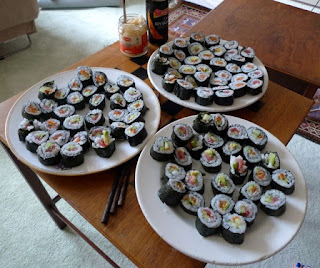