It's been an unusual week. As I mentioned the other day Dunk bought me a puzzle for my birthday. It comes from Pomegranate Artpiece Puzzles (bought via Speedyhen). Apparently a puzzle of Jackson Pollock's Convergence was first produced back in 1964, marketed as 'the world's most difficult puzzle', and sold hundreds of thousands of copies. It definitely was a very difficult puzzle. We started with the traditional edge method, and then managed to put together a few groups based on distinctive lines in the picture, however after that it felt like a herculean task; each piece could vaguely be described as beige with some black and some yellow or red, even the pieces which seemed mostly one colour often did not belong where you expected. We laboured through about a week where putting in a couple of pieces an hour seemed like a massive achievement. I changed the method to studying the picture, searching for individual pieces and then placing them within the frame roughly where they belonged, occasionally managing to attach them to something else that was already there. 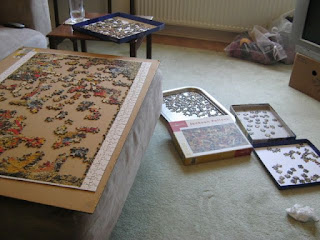 Then we decided to sort all the pieces, not by colour but by the number of 'ins' and 'outs'. Fortunately Tish had given me more chocolates for my birthday so we had two extra trays to use for storing the different categories. 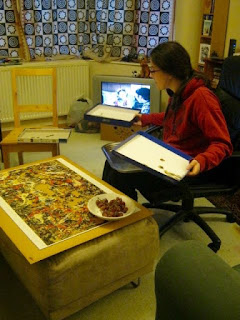 Thursday morning, my day off, I planned to sit and read. I came downstairs to make a cuppa and found Tish on the sofa with toothache, so I stayed to keep her company and started on the puzzle again. This is how it looked at 7.30am (at this point it had been worked on for a week): 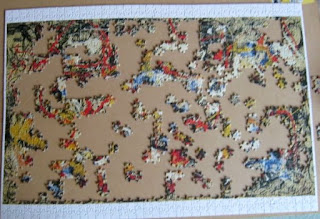 I worked for fourteen hours, getting Monkey up around 9 or so to help; Tish mainly felt sorry for herself but occasionally managed to join in. We did have Gilmour Girls on in the background for company. It has a very meditative effect to study the details of such a random image and I felt surprisingly relaxed when I finally gave in and went to bed. And this is how it looked by the end of the day: 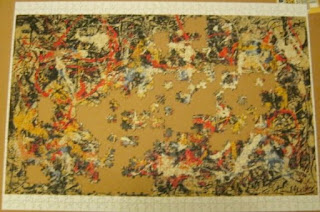 At work the following day I found myself fascinated by random paint splashes on the road. And here is the puzzle completed on Friday evening: 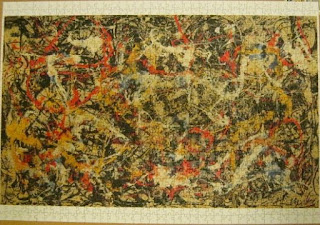 We decided it would be brilliant to go and see the original painting, a huge canvas nearly four metres wide, but then discovered it is at the Albright-Knox Art Gallery in Buffalo New York, so that's another trip for the wishlist.