I get a lot of blog feeds by email these days, but I guess I visit the blogs less because instead of excited it makes me strangely anxious to add more books to the reading list. My parents turn 80 this year, which finally feels old, I have trouble thinking of them as old, and even more trouble thinking of myself as getting old. However I recently added up and found that at a rate of about 50 books a year, if I live to my early 80s I am only going to get through another 1500 books before I pop my clogs ... that's not very many and maybe I should be more careful which ones I choose. Ok, maybe once I retire I will have more time and will get through more books, but we are still not talking a huge number.

Anyway, this morning, via Estella's Revenge, where Estella was talking about an ongoing challenge to 'Read My Own Damn Books', I found my way to Julianne at 'Outlandish Lit' who is running a 'Month-long Weirdathon' (and who doesn't love made up words), and I found myself quite agreeing with her definition of weird, so decided to join in. I have two books waiting in the wings that fit the bill: Tristano by Nanni Balestrini and How to be Both by Ali Smith (failed before but have my own copy now so will give it another go). 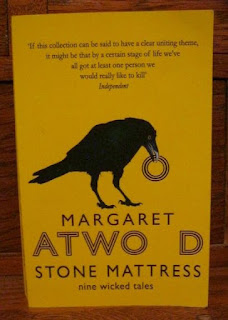 I have just finished 'Stone Mattress' by Margaret Atwood, who would probably come quite high on many people's weird list. The first three stories connect Constance, Gavin and Jorrie, a fantasy realm and the peculiarities of old people, then we move on to something more like a fairy tale, then back to the real world with an unusual discovery in an auctioned storage lot. A couple more stories deal with the character's long standing issues that have very different outcomes: The Dead Hand Loves You is a story of the bond between four housemates and a very successful horror novel, and Stone Mattress has a woman encounter a man from her past in an unexpected place. I think my favourite was probably 'Torching the Dusties', where a new-age protest movement has taken against the elderly, and how an unlikely couple escape a nasty fate. Here Wilma and Tobias first notice the protestors:
" 'What is it?' Wilma asks now. 'Is it an ambulance?'
There haven't been sirens: she's sure of that, she still hears quite well. It's at times like this that her disability is most discouraging to her. She'd rather see for herself; she doesn't trust Tobias to interpret; she suspects him of holding things back. Protecting her, he'd call it. But she doesn't want to be protected in that way.
Perhaps in response to her frustration, a phalanx of little men forms up on the windowsill. No women this time, it's more like a march-past. The society of the tiny folk is socially conservative: they don't let women into their marches. Their clothing is still green, but a darker green, not so festive. Those in the front rows have practical metal helmets. In the ranks behind them the costumes are more ceremonial, with gold-hemmed capes and green fur hats. Will there be miniature horses later on in the parade? It's been known to happen.
Tobias doesn't answer at once. Then he says, 'Not an ambulance. Some sort of picketing. It looks organised.' " (p.271)

I have given up Facebook in the last few weeks; I mean I disabled my account rather than trying to stop visiting, which is pointless as they keep sending nagging emails if you try and cut down. As a result quite a lot of reading and knitting has happened. Monkey and I have also got through two seasons of Gilmour Girls, because I can't knit and read at the same time. This is my Bressay Dress from the book Fair Isle Style that Julie and I bought together some time ago. It is knitted in Debbie Bliss Fine Donegal with the fair isle design in Noro Taiyo. I love it so much I already have yarn to knit a second one.

and there are leg warmers to match since I only used three of the five balls of yarn. 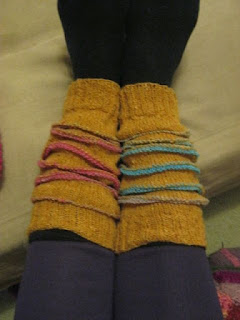 Oh yes, 'belated'. It was my seventh blogiversary a few weeks ago and I missed it for the second year running. 111 posts in the last year, which is way down, and the follower numbers went up and then down again, but I am quite philosophical since why would people visit when I have been such an irregular blogger in recent months. I can't promise to try harder, though I am reading 'The Name of the Rose' and hope to write a goodie on that.
Posted by martine at 19:39