The Boy Who Kicked Pigs 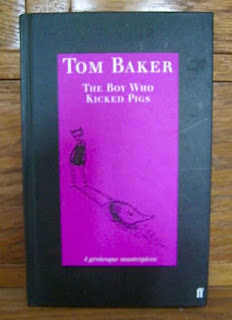 Ok, I had forgotten all about this one, Monkey and I read it a couple of months ago, but I am reviewing it here for the Weirdathon, because, I mean, what kind of a title is 'The Boy Who Kicked Pigs'! And it's by Tom Baker, and who doesn't love Tom Baker, he always was my favourite Dr Who.

This books pretty much does what it says on the tin; it is about a really unpleasant boy called Robert Caligari, who begins with hatred of his sister's piggy bank, and an insatiable desire to kick it, a habit that leads to all sorts of insane consequences.

Here he is, looking quite diabolic: 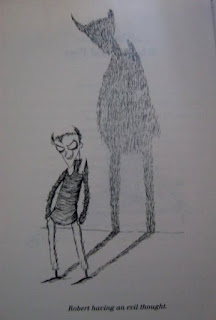 Here is the flying bacon butty, the cause of the abrupt ending of his pig kicking days: "Robert flew over the church wall hot in the same trajectory as the mugged butty. He fell headlong into what felt like a scalding pond of stinging nettles. A neglected grave carrying the name Cheesemans and suggesting, rather improbably, that the aforesaid Cheesemans were merely sleeping, nestled in the nettles where the kidnapped and abused butty had landed." (p.35) 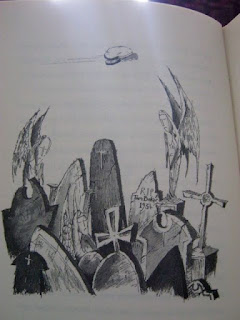 After reading about the shark lynching incident Robert finds other ways to let out his increasing hatred of the human race: "With quite amazing cheerfulness he called out sweetly but clearly to old Mr Grice, 'All clear, Mr Grice.' The old man smiled for the last time as he thanked Robert for his kindness, and slipped him a pound for his trouble. And so Mr Grice stepped under the roaring TIR forty-tonner. The brakes shrieked as the driver did his best and hit the 'dead man's handle.' People screamed and rushed forward. Robert got there first." (p.47) 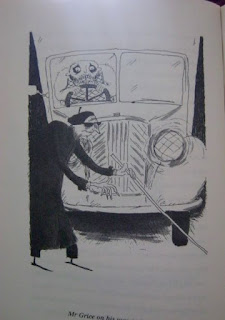 Then what starts out as an attempt to upset a poor unsuspecting horse rider with a bow and arrow turns into a major catastrophe: "The woman clung on and did her best to calm the shocked creature. The cyclists, heads down and legs whirling, went past the woman on the horse and they noticed nothing. The poor woman must have been very scared to be up there on a rearing horse and on the motorway bridge too. And she had reason to be scared. The horse leapt up and sideways and trying to get away from the arrow in its arse, it jumped off the motorway bridge and fell down on to the south-bound carriageway below." (p.69) 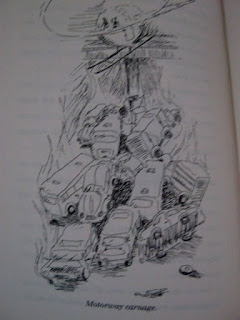 You will be pleased to hear that he gets his just deserts, but I won't spoil the end because it is far more gruesome than you could imagine, making this story most unsuitable for younger children.