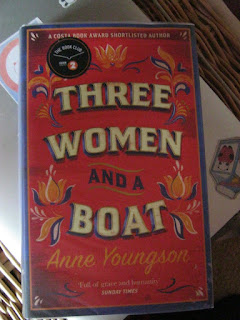 One of the few books I was obliged to read at school that I **hated** was 'Three Men in a Boat' by Jerome K Jerome. Three profoundly annoying and stupid men and a really unpleasant dog. Then I read a review of 'Three Women and a Boat' by Anne Youngson (who coincidentally was interviewed in the Guardian yesterday). It reminded me very much of 'The Keeper of Lost Things' from 2018, not because of the story but because it is a lovely-cup-of-tea book. Everyone is nice and immediately bond and form lifelong friendships and crotchety old women are all soft and vulnerable underneath but everyone is devoted to them even though they are mean and demanding and take everyone for granted. And of course it makes you want to go and live on a house boat, which part of me has always thought would be a lovely life.

So Eve, who has just been sacked, and Sally, who has just left her husband, meet on a tow path and rescue a 'trapped' dog. As a result of the chaos they find themselves agreeing to take a narrowboat to be repaired while its owner, the crotchety Anastasia, goes into hospital.

I liked it because it felt like a suspension of 'real life'; the canals are a world unto themselves, somehow apart from everything, and slow, so slow. And the slowing down has an effect on the characters. I think I liked Sally because she just dives in and loves everything about her new existence, but I also like this quote because of 'Chipper', because anyone would think it was the 1950s, nobody ever uses the word chipper now:

"She stood up, ready to throttle back as she approached a bridge and moored boats. 'Thrupp', said a sign on the wharf. Sally added this to 'clutter' as another word she liked the taste of and would never have spoken, even to herself, before. When she reached Yardley Gobion (was she creating these names from the depth of her happiness, or had they always existed?) Eve was waiting for her. A bit red in the face, a bit damp and muddy.
'I hit a bump,' she said, climbing aboard as Sally slid the Number One into the side. 'And fell off.'
'Are you all right?'
'Chipper. I bounce, or so it seems.' " (p.103)

Other quote from the end. Chatting to my friend Julie the other day by text, about her wanting to quit her job and do something else and I asked her what she wanted from a job and she said she wanted to feel competent at something, and here we have Sally, feeling competent, and how important that can be:

"Owen did talk to passers by, but briefly, and never diverting his attention from the state of the lock. He did have ways of doing things that were a bit different to the ways that Anastasia had taught Eve and Sally, but Sally felt safe. She relaxed; she drove the boat perfectly, in full control. If Owen was watching out for her, checking to make sure she did not need any help, it was not obvious. And she no longer had to be responsible for Noah. The dog had been ecstatic at Owen's arrival, which Owen reciprocated by informing him that he was an atrocious dog, possibly good for only one thing, but no one had worked out what that one thing was. after this, for as long as Owen was with them, Noah ignored Sally, much as he had done when Eve was on the boat. She'd been demoted to fourth place in his affections.
After the first eight of the flight of fifteen, they swapped over. Sally strode ahead and engaged in the usual conversations with other boaters - Where have you come from? Where are you headed? Have you heard there are problems on the Llangollen locks? Do you know where the next water point is? Isn't it a lovely day? ... The inexperienced boaters were always keen to share their lack of experience. Listening to a woman from Wolverhampton explaining her total inability to grasp how a lock worked, Sally remembered that she had done this, too, that first week. Apologised for being useless. She had never felt less like apologising or less useless in her life than now, working her way down the Audlem flight." (p.268)