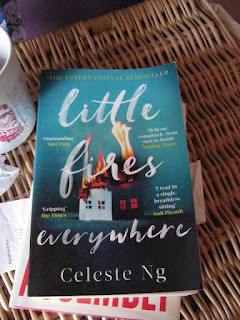 'Little Fires Everywhere' by Celeste Ng was another trawled book. Monkey and I had listened to 'Everything I Never Told You' on audio book at some point and enjoyed it so her name felt familiar. There was something a little contrived about the hippy-types-arrive-and-disrupt-conventional-family story line but I enjoyed it nonetheless. Why are American families in stories the same; there are always four children, they are always 'the jock', 'the pretty one', 'the geek' and 'the outcast'. Mia and Pearl arrive in one of those towns where everyone likes things just the way they are, and they have been this way for more generations than anyone cares to remember, and they frown ever so gently and patronisingly at people who aren't like them. Mrs Richardson thinks of herself as a liberal minded person and so offers Mia a job, as well as renting her their 'little rental house on Winslow Road'. Mia has a somewhat shadowy past, as a result of which they move around a lot, but this time she has promised Pearl they will settle down. Each family member in turn (excepting Mr Richardson I realise, who barely gets a mention) becomes drawn in by the promise of something different. However Mia's subtle intervention in the potential adoption of an abandoned baby causes Mrs Richardson to dig around in her past. The book opens and closes with the house on fire, so you know that conflagration is inevitable (and a nice little allusion in this quote too I just realised), but the question become who and why? And the hypocrisy of course, they look, they judge, they make assumptions, but there are no lengths they will not go to to protect their little corner of America. Why should anyone get to do what they want, and what, after all, does make a good mother?:

"And here was Mia, causing poor Linda such trauma, as if she hadn't been through enough, as if Mia were any kind of example of how to mother. Dragging her fatherless child from place to place, scraping by on menial jobs, justifying it by insisting to herself - by insisting to everyone - she was making Art. Probing other people's business with her grimy hands. Stirring up trouble. Heedlessly throwing sparks. Mrs Richardson seethed, and deep inside her, the hot speck of fury that had been carefully banked within her burst into flame. Mia did whatever she wanted, Mrs Richardson thought, and what would result? Heartbreak for her oldest friend. Chaos for everyone. You can't just do what you want, she thought. Why should Mia get to, when no one else did?
It was only this loyalty to the McCulloughs, she would tell herself, the desire to see justice for her oldest friend, that led her to step over the line at last: as soon as she could get away, she would take a trip to Pennsylvania and visit Mia's parents. She would find out, once and for all, who this woman was." (p185-6)

Stay safe. Be kind. Cause some chaos.