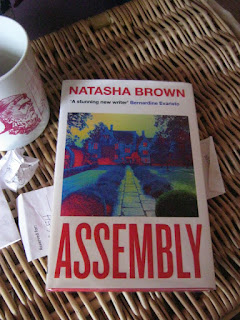 'Assembly' by Natasha Brown (who does not have her own website) is a very concise, tightly written book, there is no waffling going on here, documenting, from the inside of her head, what it is like to be a black woman. She is a superficially successful black woman, financially secure, making progress in her career, but racism is still there, infused in her everyday existence, reminding her who she is. She is obliged by the company to give talks to schools, to parade herself as a role model, something to aspire to, when she know it's all fake. She knows she's acting a part, but can't seem to stop herself. She feels very aware of how she has to become someone else in order to be acceptable. She has been fed the line about working harder and being better and aspiring to more, and as she begins to move up she questions if it is worth it. There are the two parts to her life, the one at work and the one with her upper class boyfriend, and they impact in ways both different, and the same.

"But it's there. Dread. Every day is an opportunity to fuck up. Every decision, every meeting, every report. There's no success, only the temporary aversion of failure. Dread. From the buzz and jingle of my alarm until I finally get back to sleep. Dread. Weighing cold in my gut, winding up around my oesophagus, seizing my throat. Dread. I lie stretched out on the couch or on my bed or just supine on the floor. Dread. I repeat the day over, interrogate it for errors or missteps or - anything. Dread, dread, dread, dread. Anything at all could be the thing that fucks everything up. I know it. That truth reverberates in my chest, a thumping bass line. Dread, dread, it's choking me. Dread." (p.28)

But with the boyfriend:

"But what it takes to get there isn't what you need once you've arrived.
A difficult realization, and a harder actualization.
I understand what this weekend means. Pulling back the curtain, he's invited me to the chambers beyond. It's not acceptance, not yet. It's just a step further, closer. I must learn to navigate it. Through him, and Rach, I study this cultural capital. I learn what I'm meant to do. How I'm meant to live. What I'm supposed to enjoy. I watch, I emulate. It takes practice. And an understanding of what's out of reach. What I can't pull off.
Born here, parents born here, always lived here - still, never from here. Their culture becomes parody on my body." (p.50)

It's a hard book to read because it is bringing out the infinite subtleties of how endemic racism is in our culture, that this one person's experience is symptomatic of millions of experiences, and why the lie of assimilation is so awful, because whatever she does it will not be enough. Here she talks about the anniversary party for the boyfriend's parents that they have come to attend:

"I will be watched, that's the price of admission. They'll want to see my reactions to their abundance: polite restraint, concealed outrage, and a base, desirous hunger beneath. I must play this part with a veneer of new-millennial-money coolness; serving up savage witticisms alongside the hors d'oevres. It's a fictionalization of who I am, but my engagement transforms the fiction into truth. My thoughts, my ideas - even my identity - can only exist as a response to the partygoers' words and actions. Articulated along the perimeter of their form. Reinforcing both their selfhood, and its centrality to mine. How else can they be certain of who they are, and what they aren't? Delineation requires a sharp, black outline." (p.68-9)

"Is it true that his family's wealth today was funded in part by that bought freedom; the loan my taxes paid off? Yes. And he is an individual and I am an individual and neither of us were there, were responsible for the actions of our historical selves? Yes. Yet, he lives off the capital returns, while I work to pay off the interest? Yes. But, here I am now, walking through the fruits of it; land he owns, history he cherishes; the familiar grounding, soil, bricks and trees stretching metres high; the sense of belonging, of safety, of being home. He has that here, always, to return to? Yes. Sleeping this morning, did he look renewed? Yes. Yes, of course. He is home." (p.93)

I belong in this country and take it utterly for granted. She talks in places about colonialism and the ongoing impact it has on the world, and it is so huge. And I don't know what needs to be done.

Stay safe. Be kind. Think about what needs to change.