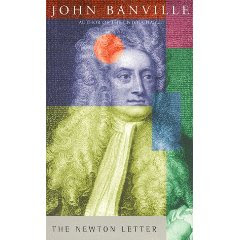 The first time I went to the book group in Stow we discussed 'A month in the country' by J. L. Carr. I loved the book (I will perhaps write about it when I have a quiet day), and it was again something I would never have picked up in a bookshop and bought. 'The Newton Letter' has something similar about it, the setting is the same, though the atmosphere is distinctly different. A middle aged academic has retreated to the country to try and finish a book about Issac Newton that he has been working on for several years. He takes up residence in the lodge of a dilapidated country house and we watch the peculiar stilted relationships that develop between him and the residents of the big house up the drive. It is quite claustrophobic. He doesn't go anywhere during the entire book, just pretends to work, and then abandons all pretence of working in favour of observing, and then obsessing about, the family.
It is quite different from the other books I have read recently. I mean I really enjoyed Lollipop Shoes but it is pretty undemanding reading, not chick-lit level but it is not trying to delve very deep and the language is straightforward. 'The Newton Letter' is on another level altogether. I sat and read for about half an hour and had to use the dictionary three times (lapidescence, gombeen and something else I don't recall), so after that I kept it close at hand. I do like to find myself reading something that is challenging, but not unfathomable. If the vocabulary were to get too obscure I would probably end up skating over things I did not understand in order to get on with the story, but i allowed myself to take my time with this book and understand and enjoy his use of language. Two little quotes that I made note of because I really liked them: from p.16 "Here was a pond, the water an evil green, overhung by a sadness of willows" (such an evocative collective noun) and from p.64 "It was an eighteenth century day".
Our protagonist describes his 'month in the country' as being somehow separated from the real world, he almost deliberately cuts himself off from the outside, but on returning he finds it has changed everything about how he thinks of things, and he is no longer sure what his life means. The parallel with Newton is drawn by the narrator as he begins to see his life in a new light. Apparently over the year of 1693 Newton abandoned science in favour of various 'superstitious' pursuits. The letter of the title being one written to John Locke in that year. He lost much of his work in a fire and seemed to have some kind of breakdown, Banville describes the letter as expressing Newton's "anguished bafflement". Having been acclaimed all over Europe for his work he now claimed he wanted nothing more to do with physics. I understood the description of his reaction to his lost work as him trying to get to grips with the enormity of the impact that his discoveries had on the entire world but that he himself was left with a kind of existential angst.
It is a very thought provoking book. This quote from Newton himself appears at the beginning, and I think it reminds us all quietly not to take ourselves too seriously:
"I seem to have been only as a boy playing on the seashore, and diverting myself in now and then finding a smoother pebble or a prettier shell than ordinary, whilst the great ocean of truth lay undiscovered before me."

And so to something yummy ... doughnuts.
When someone offers to clean out the deep fat fryer you just don't say no. Tish offered since we had been discussing home made doughnuts for some weeks now. So there followed some dough: 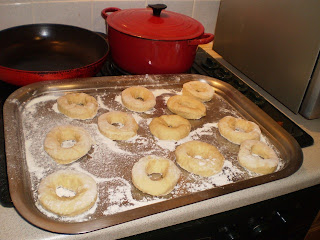 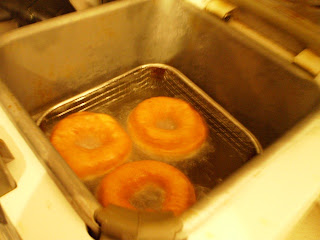 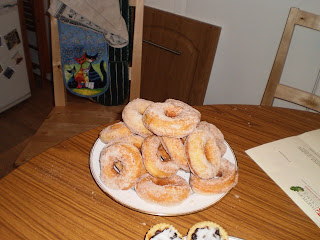 and some contented young people: 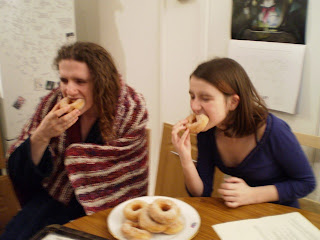