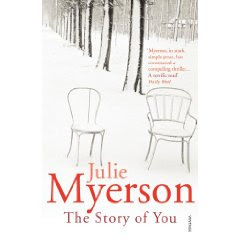 The Story of You by Julie Myerson. The lady in the library will usually tell me if I pick up something I have had before, but I think it must have been someone new so maybe she felt it was rude to point it out. Anyway, I have read this before. I started by thinking I had just read the first chapter and then taken it back (I sometimes do that if a book gets very overdue and I know I am not going to find the time to finish it), but then as I read little things reminded me I had read it all. It is a very sad book. It is the story of a woman falling apart. Her child has died, and in trying to cope with her grief she gets absorbed into an intense memory of an incident from her student days and the sense of connection it gave her with the young man involved. And strangely, just when she really needs him, he comes crashing back into her life. But the atmosphere is totally surreal and you have the impression that things are not really as they appear, and in fact they are not. It is almost as if she has to disintegrate in order to pull her life back in to some sense of reality. When she cannot cope with what is happening it is as if her mind creates something to help her understand what she needs and recover. There is a lovely scene towards the end where the kittens are born and they talk for the first time it seems about Mary, her daughter, without trying to hide from the fact that she is no longer there. It feels hopeful, that they will be able to recreate the bonds that held their family together. It is very intense in places. Rosy, or Nicole as her 'husband' calls her, is the only focus of the story, other people are overwhelmed into insignificance by the intensity of everything that is happening to her. The 'You' of the title is unnamed and slightly anonymous even though he figures so significantly in her disintegration.
I have read other things by Julie Myerson and have really liked her writing. I am not sure of the protocol in review writing. I don't want to spoil the story but want to write about the whole book. I think this is why book groups are good because everyone has read it together. Maybe I shouldn't worry too much, but I know it would annoy me to know the outcome before I read a book. It's not as if it is a mystery, and I had already anticipated the twist to the story, but I will leave it unsaid. 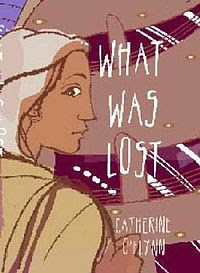 What Was Lost by Catherine O'Flynn. Book number two was read in about 24 hours. That is a good sign. I read a review of this in the paper and requested it from the library. I was hooked yesterday evening and stayed up rather late ignoring the telly and reading, and came home from work today and just sat with my cuppa and finished it. This is very much a story driven book. The characters in it are all small and broken. The title tells it all really, everyone has lost something, and the losing has had a huge impact and caused lasting damage to their lives. The little girl Kate loses her dad, and then Kate herself is lost and her loss creates the ripples that overtake the other lives. Lisa loses her brother and Kurt his partner. Even the minor players are all suffering from these losses. They are all just very sad people. And they don't really get fixed in the end, but they do seem to learn something in the process of the story and find some comfort and benefit from it. But alongside the mystery of Kate's disappearance is this terrible shadow of 'Green Oaks', the shopping centre. It is like some gross parody of capitalism, soulless and shallow, where people wander mindlessly, not seeing each other, not caring, not connecting. It becomes the thing that is crushing their lives, even more so than the losses that they have suffered. It is almost as if Kate becomes their saviour, because she brings the other characters together and their need to find out what became of her causes them to find out what should become of their own lives. A lovely book, and a strong engaging story. A debut novel the cover says, so I will have to watch and see what else she might write.
Posted by martine at 15:56